Following identification of a suitable base location and the selection of the particular infrastructure and equipment needed there, establishment of a continuously occupied multi-purpose Mars surface (or sub-surface) base. 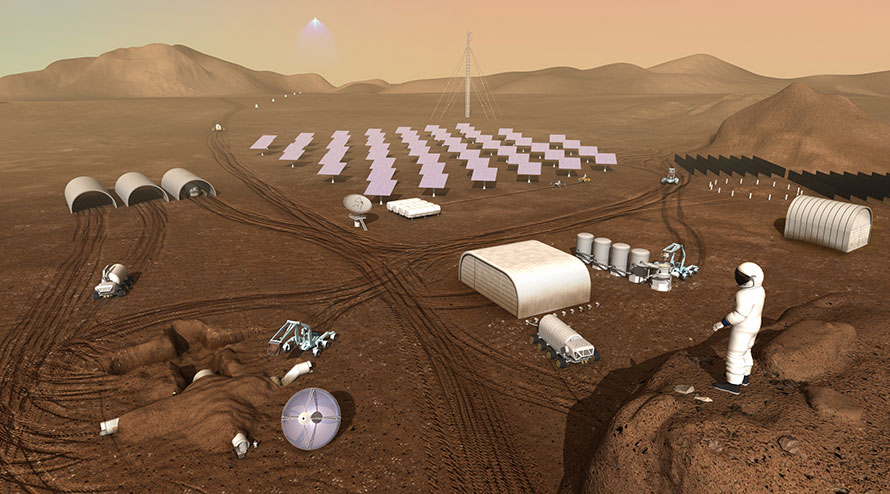 Crews landing on Mars will continue the exploratory work begun by satellites and robotic landers. The ability of humans to use tools, travel faster and over greater distances (whether on foot or by rover), recognize and investigate features faster than robots, and adapt to new circumstances, will greatly accelerate the accumulation of knowledge, especially that necessary to build a permanent outpost.

The first crews will experiment with ISRU technology and test, among other things, alternative power sources, habitats, propellant manufacturing techniques, oxygen extraction processes, gardening, mining equipment, ground transport, air transport (e.g., balloons, Mars airplanes, and even rocket “hoppers”), construction techniques and other equipment. The crews will give special attention to extracting and using ice from deposits in the immediate landing area to produce water, oxygen and rocket fuel, allowing their vehicles to return to Earth or Mars orbit.

If the transportation architecture resulted in landings on a Martian moon, crews stationed there will make similar tests on that moon. They also will probably give special attention to locating craters or other areas suitable for permanent underground quarters shielded from radiation.

Any surface base that is designed or intended to be temporary could be a dead end. It would waste crucial logistics resources such as the fuel production plant and everything else needed to support the base and the ascent vehicles, or would require the use of all expendable vehicles, making such Mars expeditions too expensive to either accomplish or maintain. If possible, the very first surface base should be intended to be permanent unless and until surface investigations show it is not a good site.

At some point a decision must be made to concentrate efforts on a primary base location, either the site of a previous landing or a newly selected site. Most likely the site chosen will be near shallow deposits of ice and surface mineral deposits such as iron oxide and sulfur, which can provide many of the essential elements needed for long-term habitation and which will reduce substantially the re-supply tonnage needed. If possible, the site would be located near a geological boundary which could provide access to multiple critical mineral deposits. That primary site may grow into the first continuously occupied human base.

As with a base on the Moon, this base will likely be occupied by a rotating group of inhabitants as well as by some who may stay permanently. The crew will be housed underground, in standardized habitation modules that are partly buried under several meters of regolith by an excavator for essentially complete radiation protection. It also may be housed in a suitable cave or lava tube. The base will probably be powered by a combination of solar power and buried nuclear reactors, since there are no fossil fuels on Mars. It should have stores of food for at least three years. The base should among other things:

This Milestone can be considered achieved when a Mars surface base has been continuously occupied for one decade.