The Martian base evolving into a permanent settlement, increasingly self-sufficient and increasingly focused on commercial activities.

The Martian base will continue to evolve, growing in volume, in area, in the number of habitat modules connected or nearby, and, especially, in population. At some point the decision will be made that the site is to be a permanent settlement if it has sufficient resources. The distinguishing characteristics of that settlement will include:

Whether humans and other mammals can survive and thrive for long periods of time, and reproduce and grow to adulthood successfully, in the one-third gravity of Mars remains to be determined, with or without advanced biomedical intervention.

As the cost of space transportation drops and the cost of the settlement is amortized or written off, emigrants from Earth should be able to pay all or at least part of the cost of their relocation. On Mars, commercial activities and experiments that were initiated in the base phase may be expanded, including tourism. Hotels may be among the structures added to the settlement. An increasing proportion of Martian settlers may be involved in such commercial activities.

It is anticipated that the majority of initial Mars settlements and buildings will be below ground so that the civilian population is not exposed to the surface radiation environment. Underground pedestrian and vehicular tunnels will probably connect most of the habitats in each community. Some buildings will be partly on the surface but will be shielded with Mars regolith generated by excavation. Some separate communities may be connected by subways. Psychological pressure for a view of the outdoors may result in the creation of above ground cupolas to allow anyone, even children, to see outdoors without significant radiation exposure. 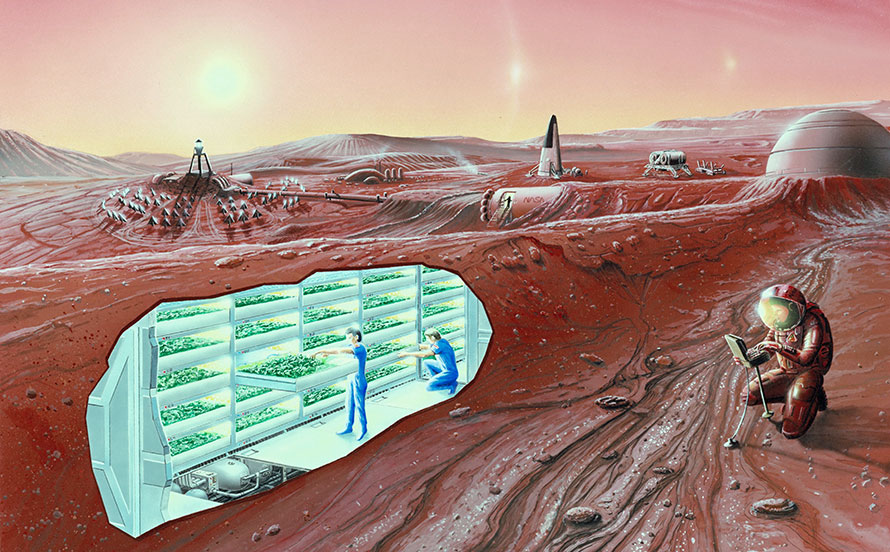 This milestone can be considered achieved when a growing settlement of at least 1000 adults has been there long enough for one generation to be born on Mars who in turn have had viable children.