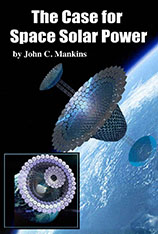 Landmark book: The Case for Space Solar Power by John C. Mankins. A must read! This groundbreaking book by renowned expert John Mankins lays out a path forward that is both doable and affordable: within a dozen years or less, the first multi-megawatt pilot plant could be in operation. Space Solar Power could transform our future in space, and could provide a new source of virtually limitless and sustainable energy to markets across the world. See NSS review. Available as a Kindle e-book for $9.95 (with free Kindle apps for any device).

Also known as Space-Based Solar Power, or SBSP The United States and the world need to find new sources of clean energy. Space Solar Power gathers energy from sunlight in space and transmits it wirelessly to Earth. Space solar power can solve our energy and greenhouse gas emissions problems. Not just help, not just take a step in the right direction, but solve. Space solar power can provide large quantities of energy to each and every person on Earth with very little environmental impact. The solar energy available in space is literally billions of times greater than we use today. The lifetime of the sun is an estimated 4-5 billion years, making space solar power a truly long-term energy solution. As Earth receives only one part in 2.3 billion of the Sun’s output, space solar power is by far the largest potential energy source available, dwarfing all others combined. Solar energy is routinely used on nearly all spacecraft today. This technology on a larger scale, combined with already demonstrated wireless power transmission (see 2-minute video of demo), can supply nearly all the electrical needs of our planet. Another need is to move away from fossil fuels for our transportation system. While electricity powers few vehicles today, hybrids will soon evolve into plug-in hybrids which can use electric energy from the grid. As batteries, super-capacitors, and fuel cells improve, the gasoline engine will gradually play a smaller and smaller role in transportation – but only if we can generate the enormous quantities of electrical energy we need. It doesn’t help to remove fossil fuels from vehicles if you just turn around and use fossil fuels again to generate the electricity to power those vehicles. Space solar power can provide the needed clean power for any future electric transportation system. While all viable energy options should be pursued with vigor, space solar power has a number of substantial advantages over other energy sources.

The technologies and infrastructure required to make space solar power feasible include:

All of these technologies are reasonably near-term and have multiple attractive approaches. However, a great deal of work is needed to bring them to practical fruition. In the longer term, with sufficient investments in space infrastructure, space solar power can be built from materials from space. The full environmental benefits of space solar power derive from doing most of the work outside of Earth’s biosphere. With materials extraction from the Moon or near-Earth asteroids, and space-based manufacture of components, space solar power would have essentially zero terrestrial environmental impact. Only the energy receivers need be built on Earth. Space solar power can completely solve our energy problems long term. The sooner we start and the harder we work, the shorter “long term” will be. 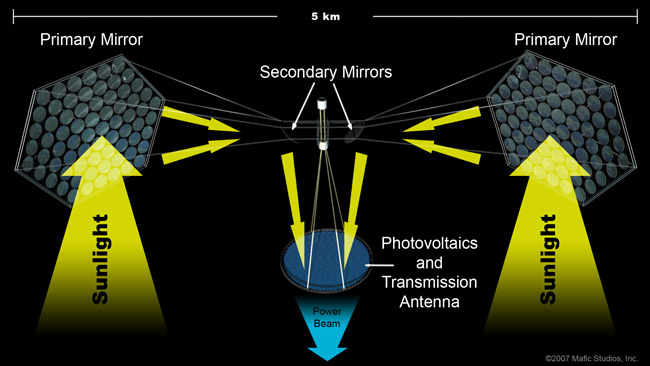