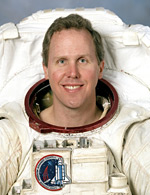 For more than a decade, NASA has been searching for near-Earth objects (NEOs) that may pose a potential impact threat to Earth. The space agency has broad expertise in scientific exploration and characterization of near-Earth asteroids (NEAs) and comets (NECs). Recent events have elevated the profile of NEOs in NASA’s exploration programs, leading NASA to revisit its potential role in conducting planetary defense. Might the space agency take a more active role in developing the means to prevent a future impact disaster?

I saw dramatic evidence for the role of cosmic bombardment in Earth’s biological and geological history during my four voyages to orbit: Impact structures, either fresh craters or the dissected remains of ancient impact scars, mark each of the six continents visible from the Space Shuttle and the International Space Station (ISS). From Arizona’s 50,000-yearold Meteor Crater to the margins of the Yucatan Peninsula, site of the Chicxulub impact 65 million years ago, to the sprawling, eroded rings of South Africa’s Vredefort Structure (300 km across and some two billion years old), it’s clear that asteroid and comet impacts have not only changed the face of the planet, but also redirected the path of biological evolution. 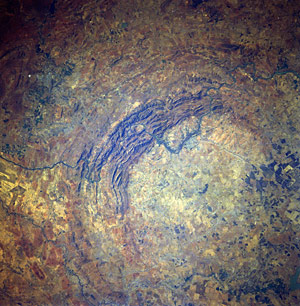 Asteroids strike Earth every day as our planet sweeps through the shooting gallery of NEO orbits. Almost all are small and burn up during reentry, causing about 30 Hiroshima-sized explosions in the atmosphere every year. Every few centuries, a body about 30 meters or larger in size survives reentry to strike the surface, causing a multi-megaton blast capable of significant damage. A recent example is the Tunguska impactor that struck Siberia in 1908: Although it detonated about 5 km up, its blast wave reached the surface to level some 2,000 square km of uninhabited forest. Impacts like Tunguska are thought to occur every 300-500 years; there are about a million small asteroids in the NEO population capable of causing comparable damage.

NASA’s Spaceguard Survey, costing about $4 million per year, has already discovered about 87 percent of the large asteroids (more than a km in size) capable of causing global impact effects and serious damage to society. In the process, more than 7,000 NEOs, most much smaller than a km, have been catalogued. About 20 percent of these NEOs are regarded as potentially hazardous objects (PHOs), following orbits that in future centuries may pose a threat to Earth. Overall, just one percent of the objects which might cause damage to Earth have been found. But what can we do, if anything, about the hazard? What should we do?

First, the executive branch should follow up on its October letter to Congress, which added deflection technology development to NASA’s traditional NEO search-and-study role, by proposing a modest budget increase for NASA dedicated to planetary defense. Over the course of a decade, for about 1/60 of NASA’s annual budget, the agency could conduct a thorough NEO search and demonstrate techniques and technologies that together would make deflection a practical alternative to “taking the hit” from a rogue NEO.

Second, NASA can expand the scope and pace of our search for hazardous NEOs by launching a dedicated NEO search telescope, orbiting the Sun in a Venus-like orbit to rapidly scan the cloud of asteroids presently inaccessible to Earth-based instruments. Such a telescope can find nearly all NEOs down to about 140 meters in size (the current goal directed by Congress) in less than seven years, at a total cost of about half a billion dollars. This instrument would also identify hundreds of NEO targets for potential human exploration.

Third, NASA should capitalize on its deep space operations experience to develop and demonstrate deflection technologies that might divert a NEO threatening an impact. Planetary defense experiments should be added to planned NEO science and exploration missions to obtain the critical knowledge of NEO properties we will need for a future deflection. After proving deflection techniques like the gravity tractor and kinetic impact via robotic spacecraft, NASA’s ultimate goal should be an international mission demonstrating the ability to nudge a (non-threatening) NEO onto a new trajectory.

To guide these activities, a NASA-chartered task force that I recently chaired with Apollo 9 Astronaut Rusty Schweickart produced a report for NASA Administrator Gen. Charles Bolden. Our task force members produced five major recommendations [see the Report of the NASA Advisory Council Ad Hoc Task Force on Planetary Defense in the NSS Planetary Defense Library]. Our hope is that Gen. Bolden will take these concrete steps to organize NASA for planetary defense, step up its NEO search efforts, characterize the fundamental physical properties of NEOs, and research the physics of deflection and the impact process. Most important, our task force recommended that NASA lead both U.S. government and international efforts to develop and demonstrate a capacity for planetary defense. This effort will involve effective communication about the NEO hazard to the public, and spurring the development of an international framework for deciding when and how to deflect a threatening NEO.

The impact hazard is a global one. The Association of Space Explorers (ASE, the professional society for astronauts and cosmonauts) has for the last five years supported United Nations discussions on how countries can collaborate on the prevention of a future impact. ASE proposed a broad decision-making framework to the U.N. in 2008 [see Asteroid Threats: A Call for Global Response in the NSS Planetary Defense Library]. Discussions among interested space agencies are now improving on this plan. ASE and the Secure World Foundation brought together NASA and the European Space Agency in October to explore how cooperating space agencies might plan and execute a deflection campaign against an asteroid on a collision course with Earth.

The White House and Congress will decide this year on whether NASA should receive new funding for planetary defense research. Fiscally, times are tough, but now is the time for policy makers to recognize that planetary defense, human exploration, and scientific understanding of NEOs are synergistic and mutually supportive activities. Pursuing all three areas of NEO activity strengthens NASA’s relevance to society and involves the agency in addressing a fundamental human need — survival.

With our planned telescopes and space technology, we have two of the three elements necessary to prevent future damaging asteroid impacts. NASA currently searches for the largest NEOs and warns of any asteroid discovered that is potentially hazardous to Earth. New ground-and spacebased search systems will improve our capability to protect against smaller, more numerous asteroids. NASA should design experiments and demonstrations into its asteroid exploration missions that show that NEO deflection is possible. The missing third element for NEO impact prevention is international planning to respond in advance to a future asteroid collision. NASA is wellpositioned to lead domestic and international efforts to produce such a plan. To succeed, the agency must move beyond search, analysis, and warning to develop the practical means for actually changing a threatening NEO’s orbit.

Without improved NEO search and tracking, experience in deflection, and essential international planning, the only possible U.S. response to a threatened impact would be evacuation, followed by disaster response. If a sizeable random NEO strikes Earth without warning, the damage to the U.S.’s leadership and reputation would be severe — and completely avoidable. Planetary defense is a common sense mission for NASA, one that combines its scientific and technological capacities to prevent a disaster of cosmic dimensions.