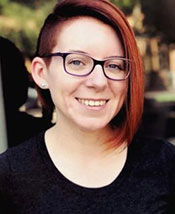 Dr. Tanya Harrison is the Director of Research for the Space Technology and Science (“NewSpace“) Initiative at Arizona State University. She works on commercial-academic space partnerships and martian geomorphology research. She is also a Science Team Collaborator on the Mars Exploration Rover (MER) Opportunity.

Tanya received her Ph.D. in Geology with a specialization in Planetary Science and Exploration from the University of Western Ontario’s Centre for Planetary Science and Space Exploration (CPSX). From 2008 until 2012, she was on the science operations team for NASA’s Mars Reconnaissance Orbiter (MRO) Context Camera (CTX) and Mars Color Imager (MARCI) at Malin Space Science Systems (MSSS). For CTX, she chose what the camera takes pictures of in a given week and then analyze those images from a geologist’s standpoint. For MARCI, she wrote Mars weather reports for the general public, as well as a few times for the Spirit and Opportunity rover teams to alert them of any impending storms that could threaten the rovers. Tanya was also a science team collaborator for the Mars Science Laboratory (MSL) rover Mast Cameras (Mastcam), Mars Hand Lens Imager (MAHLI), and Mars Descent Imager (MARDI). While this work was exciting, she made the decision after 4 years to return to graduate school and get her Ph.D.

Tanya holds a B.Sc. in Astronomy and Physics from the University of Washington, and a Masters in Earth and Environmental Sciences from Wesleyan University. Her areas of interest include martian geomorphology and terrestrial analogues, spectroscopy, and glaciology. Tanya’s work in astronomy involved cooling mechanisms of interstellar dust clouds, diffuse interstellar bands, the metallicity of the old, metal-rich cluster NGC 6791, and the metallicity and lithium abundances of the recurrent novae T Coronae Borealis and RS Ophiuchi.

Tanya has also been active in education and public outreach, getting involved with organizations such as The Planetary Society, Expanding Your Horizons, Girl Scouts, Norwescon, The Mars Society, and The National Space Society.

In her spare time, Tanya is a professional photographer and the owner/photographer behind Station Toronto, a company celebrating the public transit system of Toronto.