The Bigelow Expandable Activity Module (BEAM) Comes to the ISS 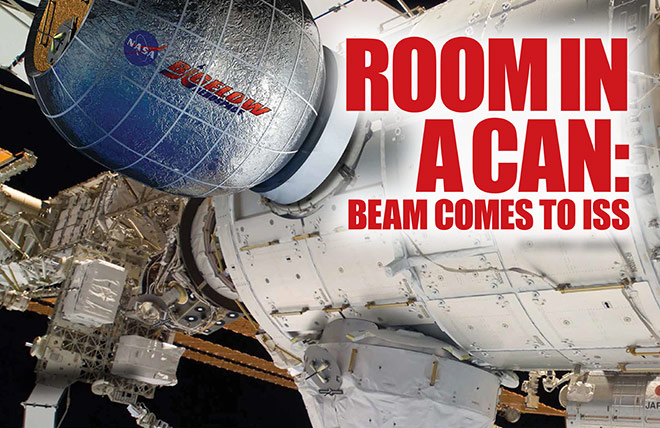 From the time it was first conceived, NASA has planned to use the International Space Station as an engineering testbed to demonstrate and refine new technologies that will be needed when humans once again venture out of Earth orbit and into deep space. One of those technology tests will be coming to ISS sometime in 2015 in the form of a collapsed balloon that inflates to a new room for the space station. BEAM (the Bigelow Expandable Activity Module) began life at NASA, and moved to development at Bigelow Aerospace (a private company). NASA cancelled further work on it, and it is now coming back to NASA. It’s a perfect example of the new partnership between government and the private sector encouraged by NASA to maximize its “bounce per ounce” of government spending.

In 1997, as construction began on ISS, NASA was also working on a module called TransHab (short for Transit Habitat) as part of its long-term plans to send humans to Mars. The plan was to test this inflatable module on ISS by using it for the ISS crew quarters. But when the Bush administration assumed office in 2001, it found a space station program that was way over budget. To contain costs for ISS, a number of modules, including TransHab, were cancelled. That might have been the end of the story, but a Las Vegas entrepreneur and visionary named Robert Bigelow, who had made his fortune in the hotel business, read about the technology and offered to license the patents from NASA. NASA even loaned several TransHab engineers to Bigelow’s new company for a few months.

Over the next decade, Bigelow Aerospace brought the technology from concept to reality. They had a lot of work to do. “We worked a lot on the technology just to move it from a TRL [Technical Readiness Level] of 2 up to TRL-4 or TRL-5, but we by far didn’t optimize that technology,” says Glenn Miller, NASA’s principal investigator for the BEAM experiment. Bigelow has not only worked to make manufacture of inflatables more cost-efficient, they’ve “also done quite a bit more work on finding materials that were higher performing than what NASA came up with” for TransHab. Along the way, they applied for and received patents of their own, many of which are held by Bigelow personally. With the two unmanned test modules Bigelow has already flown (Genesis I in 2006 and Genesis II in 2007, both launched on surplus Russian ICBMs), “it’s up around TRL-7. We just haven’t put the man inside the vehicle yet. When that’s finished, we’ll be up to TRL-9,” i.e., fully certified for use by human crews. 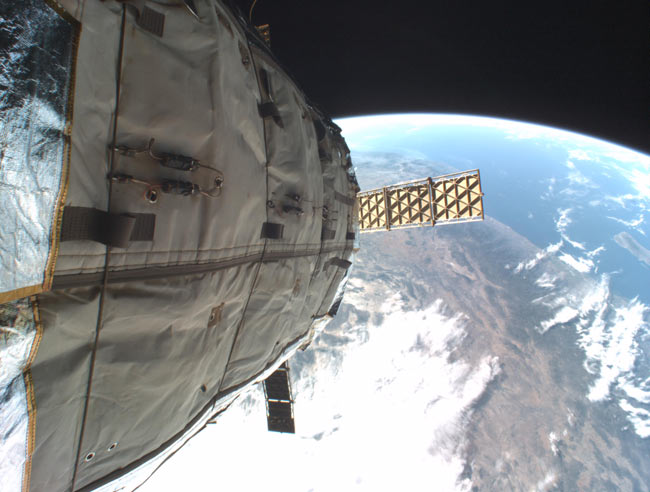 Image credit: Bigelow Aerospace. Bigelow’s BEAM module is likely to be an upscale version of the already orbiting Genesis module.

BEAM will launch in the unpressurized cargo hold of a Dragon supply capsule, on the eighth commercial resupply mission SpaceX is contracted to deliver to ISS. Once Dragon docks to ISS, the space station’s robotic arm will extract BEAM from Dragon’s hold and attach it to one of the ports on Node 3. Then BEAM will be inflated from its packed dimensions of 5.7 feet long and just under 7.75 feet in diameter to its pressurized dimensions of 12 feet long and 10.5 feet in diameter-the size of a large closet. Over the next two years the module will be monitored for temperature, pressure, and radiation, and ISS crew will occasionally enter the module to check on its condition. But since this is purely an engineering experiment, there are no plans to store anything in BEAM or use it for any other experiments. It will be an empty closet. After two years of testing, it will be cast off from ISS, to burn up on reentry into the atmosphere.

Inflatable habitats have long been recognized as a key technology for opening the solar system to human exploration and commercial development, because they can be launched in a compact form in the small confines of a launch vehicle’s cargo shroud, which is streamlined to minimize air resistance during its flight from Earth’s surface to orbit, then expand into much roomier quarters for their crew. They also have a low weight-to-volume ratio. At 3,000 pounds and 560 cubic feet of pressurized volume, for instance, BEAM weighs only 5.35 pounds per cubic foot.

Also, although living inside a balloon while traveling through the vacuum of space may seem more risky than living in a hard aluminum shell, inflatables as they have been developed turn out to be actually safer than the current ISS modules. The BEAM’s skin is made up of multiple layers which include a layer of Vectran, a bulletproof fabric two times stronger than Kevlar. Vectran doesn’t tear if punctured, and tests have shown that micrometeoroids that would penetrate the walls of ISS only got halfway through the BEAM’s skin. Even if it is punctured, BEAM wouldn’t burst like a balloon. Just like any other ISS module, it would leak slowly enough to allow anyone inside to evacuate.

BEAM offers better radiation protection, too. Some of the highly energetic particles which make up space radiation are shattered on impact with the ISS aluminum skin and create secondary radiation. Those particles pass through the thinner walls of Bigelow’s inflatables without disintegrating, so although anyone inside would get the same dose of primary radiation, they would get none of the secondary.

One other feature that the ISS crew will appreciate: the nonmetallic BEAM walls absorb more sound than the aluminum walls of the ISS modules, so BEAM will be the quietest place aboard ISS.

The two-year trial of BEAM on ISS is a real bargain for NASA. Bigelow has spent about $250 million to develop inflatable space habitats, and NASA is paying only $17.8 million to try one out. As NASA Deputy Administrator Lori Garver said when the contract was announced, “This is a gateway for NASA to utilize private sector investment, and for pennies on the dollar to expand our understanding of this technology.” 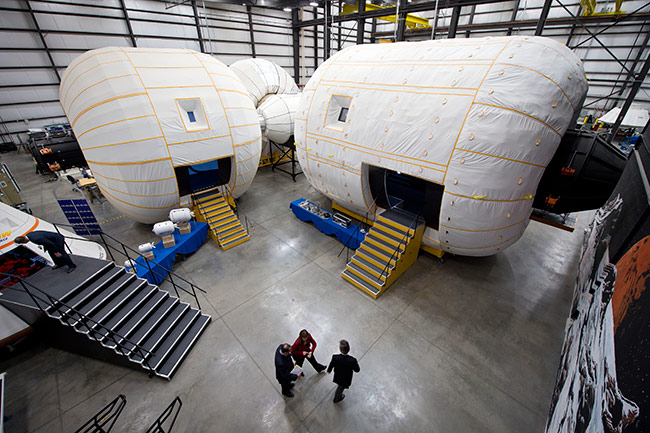 Image credit: Bill Ingalls, NASA. NASA Deputy Administrator Lori Garver is given a tour of the Bigelow Aerospace facilities by the company’s President Robert Bigelow back in Feb. 2011, in Las Vegas. NASA has been discussing potential partnership opportunities with Bigelow for its inflatable habitat technologies as part of NASA’s goal to develop innovative technologies to ensure that the U.S. remains competitive in future space endeavors.

Getting NASA’s seal of approval is also important to Bigelow’s commercial marketing plan. Once commercial crew transport services become available through SpaceX with their Dragon capsule and Boeing with their CST-100, Bigelow plans to launch a commercial space station and rent it out as a research laboratory and microgravity manufacturing facility to private companies and foreign governments. The station will be constructed with two BA-330 modules, Bigelow’s basic building blocks that each contain 330 cubic meters (about 12,000 square feet) of habitable volume. The two-module configuration would give Bigelow’s space station more than two-thirds as much habitable volume as ISS—with much cheaper and much less restricted access. When that day comes, having NASA’s validation of its hardware will make it easier to attract customers. “NASA carries a great deal of prestige internationally,” says Mike Gold, Bigelow’s director of Washington operations and business growth. “Many potential clients have expressed to us that working with NASA helps bolster the way others view us, particularly overseas. You can’t have a stronger, brighter gold star than working with the agency.”

Beyond its use for space stations in Earth orbit, expect to see inflatable technology used for habitats on the Moon and Mars—anywhere humans venture in the Solar System. Bigelow Aerospace will be there to sell them to NASA, and to anyone else who needs them.