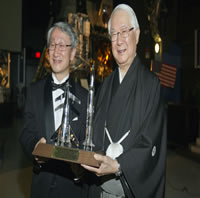 THE 2011 WERNHER VON BRAUN MEMORIAL AWARD, the 8th biennial award of its kind, was presented to the Hayabusa Team of JAXA, Japan’s space agency, at the gala and awards dinner on Friday, May 20, 2011.  The team was represented by Dr. Junichiro Kawaguchi, program manager; Dr. Hiroki Matsuo, former director general of the Institute; Dr. Kuninori Uesugi, former project executive; Dr. Hitoshi Kuninaka, project engineer; Norimitsu Kamimori, JAXA representative: in Washington, D.C. These individuals represent all of the dedicated personnel who worked on the mission. The award honors the teamwork between controllers and engineers that successfully brought the Hayabusa spacecraft back to the Earth, after three major firsts: the first round trip to the surface of an asteroid, the first round trip to an extra-terrestrial object using ion powered thrust, and the first return of samples from an asteroid’s surface. During the last five years, a true “space odyssey” unfolded as the Hayabusa team struggled to return the ion-drive powered spacecraft back to Earth to complete its mission. The recent discovery of asteroidal material in both sample containers crowned the achievement. 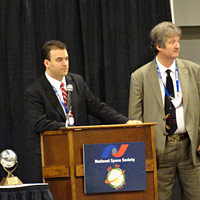 This was presented to SpaceX and Elon Musk at the Saturday luncheon. The award was accepted for SpaceX by Adam Harris, vice president for Government Affairs. The award recognizes Musk’s remarkable business discipline, with which SpaceX has been able to make steady progress during the last year. This was accomplished along with three superb technical accomplishments in 2010: two successful early launches of a large booster, rarely matched in the history of rocketry, and the first flight and recovery of a privately designed commercial vehicle capable of carrying humans into Earth orbit and back safely. These accomplishments now appear to be having a significant effect on space policy opinions toward launch privatization in government, media, and the public. All SpaceX employees should be congratulated on the historic work they are doing. The recent announcement of the Falcon Heavy continues this critical work for enabling affordable space transport. 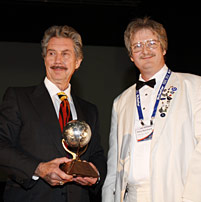 Presented at the gala to Robert Bigelow, president and CEO of Bigelow Aerospace. The Space Pioneer award honors Bigelow’s efforts to advance the technology of inflatable space habitats and for the significance they may play in the development of space tourism, industry, and exploration. His company rescued the concept of inflatable space habitats from oblivion. His efforts took the good work that went into the Transhab project and revised, extended, and effectively reinvented it, to develop and successfully launch the world’s first expandable space habitats (Genesis I and II). 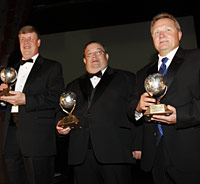 Presented at the gala to the X-51A Waverider Team, represented by project managers: Charles Brink from the Air Force Research Laboratory; William Cook (for Joseph Vogel) from Boeing Phantom Works; and Michael Mckeon (for George Thum) from Pratt & Whitney Rocketdyne. All of the personnel who contributed to the success of the X-51A WaveRider, the first powered vehicle to achieve sustained hypersonic flight, are honored with this award. 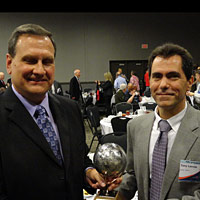 Presented to Dr. Paul Spudis at the Friday luncheon. The Space Pioneer award recognizes Dr. Spudis’ paper, “Mission and implementation of an Affordable Lunar Return” with co-author Tony Lavoie, and the accompanying article, “Can we afford to return to the Moon.” The papers present a clear and rational direction for creating a future cislunar space transportation and logistics system. The use of lunar resources for propellant production as an integral part of the system is a crucial component of his concept. This paper is a significant contribution to our national debate on space goals and methods. Dr. Spudis has also made significant contributions with his work as a staff scientist with the Lunar and Planetary Institute, as principal investigator for the Mini-RF experiment on the Indian Chandrayaan-1 mission, and many others.

For a Lifetime of Service to the Space Community: 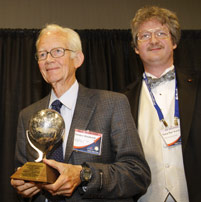 Presented to Gordon R. Woodcock at the Saturday awards banquet. The award honors him for his many contributions to the advancement of space technology, concepts, and advocacy in a great variety of areas. His 57-year aerospace career includes, among many other roles, principal investigator for Boeing’s Solar Power Satellite Study of 1977-1980, President of L5 (1984-86), NSS director, and Chairman of the NSS Executive Committee. He currently serves as a member of the NSS Policy Committee. After retiring from Boeing in 1996, he has continued his full participation in this field with the publication of over 100 books and articles, including current books and AIAA papers on space mission architectures for beyond low Earth orbit. His book, Space Exploration Mission Engineering, will be released in November 2011.

Service to the Space Community:

Presented to George T. Whitesides for his five years of service as Executive Director of the National Space Society (2004-2008), as the co-creator of Yuri’s Night (along with Loretta Hidalgo Whitesides and Trish Garner) in 2001, and as a senior advisor to Virgin Galactic, where he also served as a zero gravity flight coach. He was named CEO of Virgin Galactic in May 2010. In addition, he has served as NASA chief of staff from 2009 to 2010. He has served on multiple space-related boards and advisory committees and has effectively used his creative and interpersonal skills to advance the cause of access to space and many of the space community’s other common goals. His vitality and leadership moves the space community towards the goal of a vibrant space-faring world.

The 2011 NSS Excellence Awards for distinguished service to the Society were presented to: