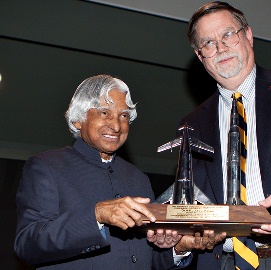 NSS presented its WERNHER VON BRAUN MEMORIAL AWARD to the former president of India, Dr. A.P.J. Abdul Kalam, for his global and local leadership in space, and in particular his support of space development and for Space Solar Power as a major global energy source. His work with high school students in India is also praiseworthy.  The award ceremony was followed by a speech on Space Solar Power by Dr. Kalam. 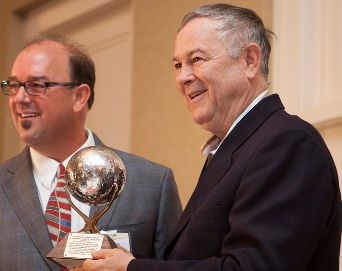 U.S. Representative Dana Rohrabacher was honored with a SPACE PIONEER AWARD for Government (Legislative) Service. The award recognized his quarter century of dedication to supporting a rational and forward-looking space program. Rep. Rohrabacher is known for his support of Space Solar Power and launch cost reduction, and other practical issues such as cryogenic propellant depots, which are crucial to allow the operation of reusable vehicles in space. He is also a long-time champion of the commercial cargo and crew programs and launch privatization in the face of stiff opposition in Congress. 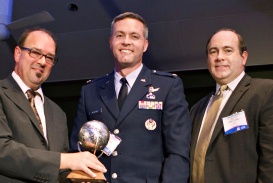 NSS recognized the achievement of the Boeing Company and the Air Force with a SPACE PIONEER AWARD for Science and Engineering for its operational and fully reusable test-bed vehicle, the X-37B, the only current space vehicle that can stay in space for more than a year and then land on a runway. Representing the X-37B Orbital Test Vehicle Development Team were Ken Torok, Jr. of Boeing and Lt. Col. Thomas C. McIntyre of the Air Force. 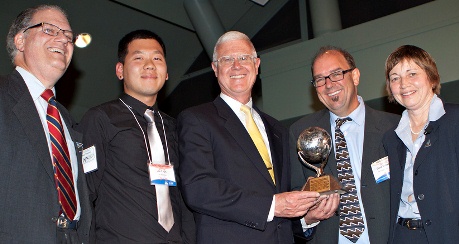 The SPACE PIONEER AWARD for Science and Engineering was presented to the Gravity Recovery And Interior Laboratory (GRAIL) Team, for their effective work investigating the variations of crustal density of the Moon and its geology using two lunar satellites named “Ebb” and “Flow” to measure minute gravity variations. The team was represented at the ceremony by Principal Investigator Dr. Maria T. Zuber and Project Manager David H. Lehman. 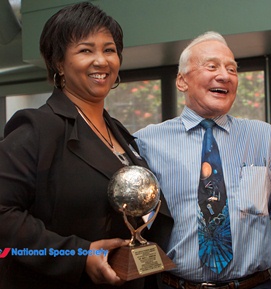 The SPACE PIONEER AWARD for Service to the Space Community was presented to Dr. Mae Jemison for her many years of space-related work, including her flight on the Shuttle Endeavor on September 12, 1992, and her current leadership of the 100 Year Starship project. 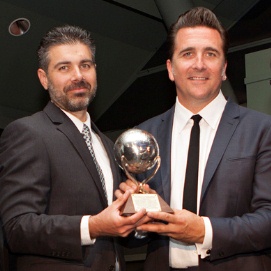 The SPACE PIONEER AWARD for Science and Engineering was presented to the Mars Science Laboratory Entry, Descent, and Landing (EDL) team for their excellent work in getting the Curiosity Rover to the surface of Mars intact and ready for scientific exploration.  In particular, the courageous effort to promote and create a working Sky Crane system was recognized.  Several members of the MSL team attended the ceremony, including Adam Steltzner, EDL Team Lead; Raymond Baker, EDL Propulsion Lead; Peter Theisinger, MSL Project Manager; and Fuk Li, Mars Program Manager.

ACTIVIST OF THE YEAR AWARD

The 2013 NSS Excellence Awards for distinguished service to the Society were presented to: