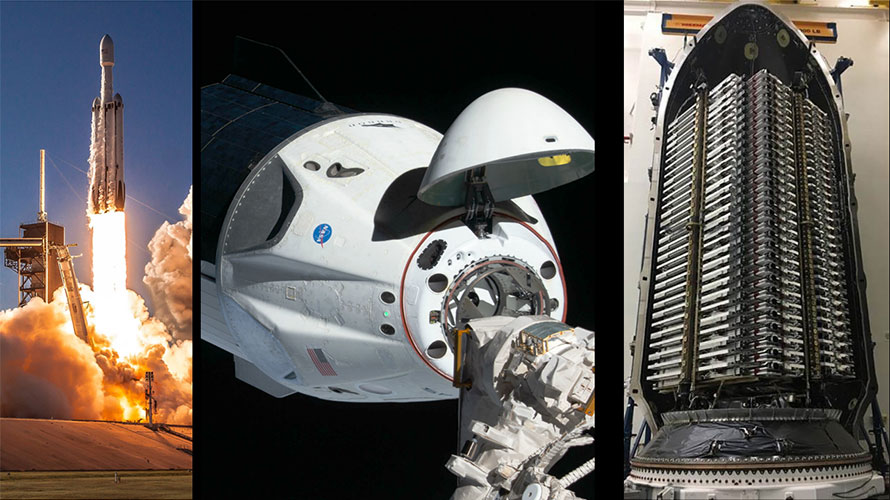 Just by the numbers SpaceX had a terrible year—only 13 launches, down from 21 in 2018, and 18 in 2017, although more than in 2016 and previous years. What gives? Was there a terrible disaster? Was another rocket lost on the launch pad? Let’s take a closer look.

There was an “anomaly” when the Dragon 2 capsule that had successfully flown to the ISS blew up in a ground test. There were also some parachute test failures that delayed the crewed launch of the Dragon 2. However, although SpaceX did experience some real setbacks in 2019, they don’t seem sufficient to explain the considerable reduction in launch rate.

That totals five launches—what about the rest?  They included:

It is sometimes falsely claimed that most SpaceX launches are for NASA. In 2019, even with a big reduction in launches, only 4 out of 13, or 31% were for NASA. If we add the single Air Force launch, this gets us to 5 out of 13, or 38% for the U.S. government. This means that the great majority of SpaceX launches in 2019 were for parties other than the U.S. government, a validation of the COTS/CRS program and public-private partnerships in general. To provide a view deeper in time, according to this website (https://www.spacexstats.xyz/#payloads) to date 64% of SpaceX payloads to date have been commercial.

2019 brought some success and some failure with Falcon Heavy center cores, with one being lost completely, and the other landing on the drone ship, but later toppling over due to rough seas.

By any normal standard, 2019 delivered incredible success for SpaceX. These achievements pale only compared to the even higher goals for 2019 that SpaceX set for itself but failed to achieve, such as getting a crew to the ISS. For perspective, SpaceX put up 13 of the 21 U.S. 2019 launches, or 62% of the total. ULA had only five launches in 2019. There were only two Antares launches to the ISS in 2019.

It is disheartening that the opponents of public-private partnerships continue to repeat the canard that COTS/CRS did not create commercially successful competitors. Although it is true that the Antares has not gained commercial acceptance, SpaceX has brought global leadership in commercial space launch back the U.S., while revolutionizing the rocket business with new capabilities and lower cost to orbit. Truly, COTS/CRS is the “gift that keeps on giving” and we can look forward to SpaceX setting a new launch record in 2020 as Starlink deployment gears up.

Postscript: In addition to all of the above, SpaceX built and flew the “Starhopper” to demonstrate their next-generation Raptor methane/lox engines, while doing a large amount of design and construction of prototype “Starships” in Florida and Texas.

Image at top: An April 2019 Falcon Heavy launch, the Dragon 2 docking with the ISS, and a cargo of 60 Starlink satellites ready for launch (credit NASA, SpaceX).