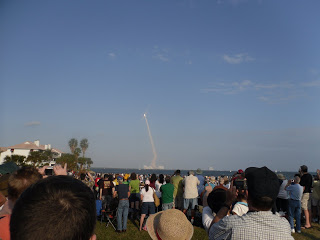 Space Shuttle Discovery launches for the last time on February 24th, 2011. Picture taken from the Space Walk of Fame Park in Titusville, Florida by the author.

I’ve been bogged down in my other job lately – so I haven’t had a lot of time to update this blog (unfortunately). But never fear, dear readers, I am back!

In February, I saw the Space Shuttle Discovery launched on its final mission before a well-deserved retirement from Titusville, Florida. Also, I got to visit the Space Walk of Fame Museum and Park, which had a lot of extremely cool exhibits, artifacts, and monuments. I took a ton of photos, so I will be sharing these with readers of this blog in increments. I also got to hear some hilarious (and some heartbreaking) stories about the NASA workers and astronauts who made Mercury, Gemini, and Apollo possible. I will be sharing these as well.

I started another blog on Tumblr dedicated to mainly rare photos and videos of vintage NASA astronauts and people as well. Also we engage in a lot of hilarious cross-fandom and other talk. So if you want to engage in some discussions about how insanely funny Frank Borman’s facial expressions can be sometimes (he’s so…serious), come visit me at the space known as “As Only NASA Can.” Readers can feel free to submit pictures of NASA-related stuff and minutiae.

In addition, “As Only NASA Can” already has its own spin off. This micro-blog is called Awww Yeah, It’s John Young. This blog is obviously dedicated to Florida’s own, best astronaut from the Golden Age of Spaceflight. Feel free to submit any John Young related material to this Web site. And I’ll salute you, Navy-style.