A Few Things You Probably Didn’t Know About Skylab, Covered in “Searching For Skylab” 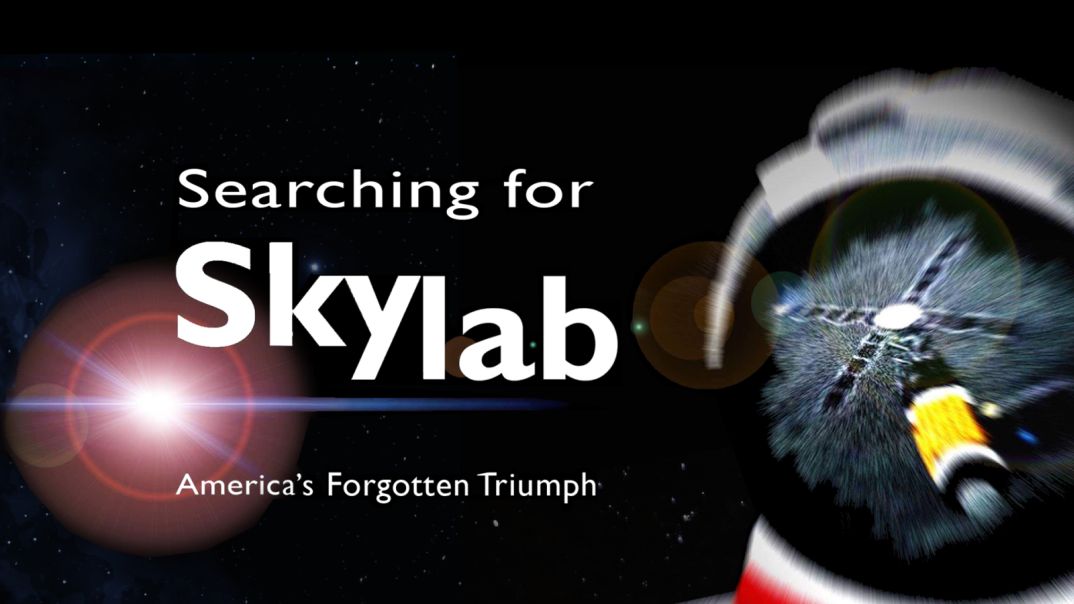 The documentary Searching For Skylab, released on Vimeo on March 5th, is a treasure trove of as-yet-unseen archival footage of the much-underrated early 1970s U.S. space station, inter-cut with commentary from its astronauts, workers, major players, and experts. Director Dwight Steven-Boniecki’s film also serves to demolish some commonly held myths about Skylab, which have persisted for 45-plus years. Here are some Skylab facts that even dedicated space enthusiasts may discover watching the first-ever documentary dedicated to the S-IVB-based space station that orbited the Earth from its chaotic May 1973 beginnings to its fiery July 1979 demise over Western Australia. Note: some film spoilers included.

1. Skylab had an Earth analogue mission: Before Skylab was launched in May 1973, three junior astronauts took part in an Earth analogue mission that simulated the conditions its crews would face. This mission was called the Skylab Medical Experiment Altitude Test, or SMEAT; it was held for 56 days at NASA’s Johnson Space Center (then the Manned Spacecraft Center) from July 26 to September 19, 1972. The SMEAT “guinea pigs,” Robert Crippen, Karol “Bo” Bobko, and William Thornton, evaluated conditions and activities that were to be conducted aboard the orbital space station at 1/3 bar pressure. Some rare footage of the evolutions performed during this mission can be viewed in Searching For Skylab.

2. Skylab suffered some pretty gruesome launch injuries: Skylab launched on May 14, 1973, on an overcast day, serving as the Saturn V’s swan song. However, it very nearly served as Skylab’s swan song. While the timeline for its launch injuries is better explained by this link, in summation, Skylab arrived in space missing its micrometeroid shield and the SAS-2 solar array; the SAS-1 solar array was jammed shut by debris. Temperatures aboard Skylab soared; in addition, its experiments were threatened not only by the high temperatures, but also by an electric power shortage.

During 10 days between these calamities and the launch of the first crew, NASA’s Jack Kinzler devised a novel sunshield replacement; a twin-pole sunshade would also be erected during the second crewed Skylab increment. Moreover, the first crew’s commander Charles “Pete” Conrad, Jr. and science pilot Dr. Joseph Kerwin performed an EVA on June 7, 1973 which would un-jam the errant solar panel, essentially saving the program. Excellent footage of this EVA, featuring the (hilarious) banter between Conrad and Kerwin, is featured in Searching For Skylab. 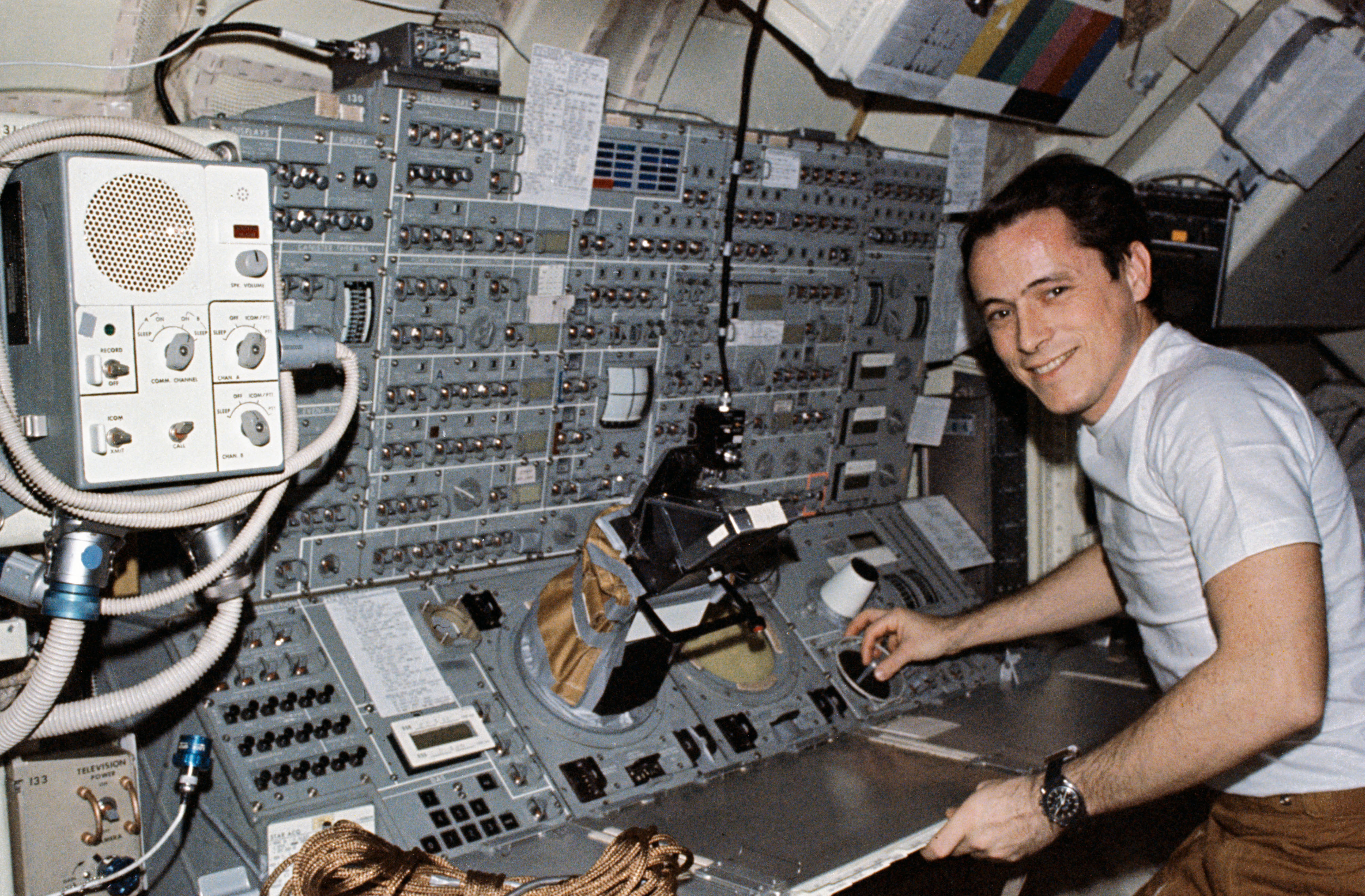 3. Television transmissions from Skylab were very entertaining: Searching For Skylab showcases many of the television transmissions that took place aboard the space station. For example, we see Skylab 3’s Alan Bean and Jack Lousma humorously explaining how the infamous Skylab shower worked. We also see Lousma giving TV viewers a tour of the station, showing Skylab’s array of alarms, and Bean receiving a haircut from science pilot Dr. Owen Garriott. We observe Skylab 4’s William Pogue explaining orbital mechanics with spheres, rocking an impressive beard. We see the first crew’s Kerwin demonstrating the concept of angular momentum using his own body, utilizing the massive space within the orbital workshop. This restored footage makes the viewer feel like he or she is somehow aboard the space station, floating in its massive volume.

4. There was no “mutiny” during the Skylab 4 mission: Over the decades, much misinformation has been reported about a supposed “mutiny,” “strike,” or “work stoppage” that allegedly took place during Skylab 4’s mission during late December 1973. Director Boniecki actually went to the source to defuse this myth, and interviewed the mission’s science pilot, Dr. Edward Gibson, one of the alleged “mutineers.”

Here, the viewer discovers that the “strike” was, in fact, an agreed-upon day off, mutually discussed with ground controllers. In addition, we discover that the crew was overtaxed and overscheduled from the mission’s beginning, being the last ones out of the gate, and eventually settled into a better, more manageable work flow following discussions with mission controllers. Days after the alleged “mutiny,” former astronaut boss Donald K. “Deke” Slayton gave the crew of Gerald Carr, Gibson, and Pogue glowing reviews via a ground-to-orbit chat, which elides the point of a “strike” completely. This information is revealed in Searching For Skylab for perhaps the first time in 45 years.

5. Skylab was brought down in part by the star it studied: In February 1974, Skylab entered its uncrewed phased, which would last for the rest of its orbital life. By 1978, Searching For Skylab reveals, through expert interviews, that Skylab had made NORAD’s decay list, meaning it would reenter soon. A “reboost” mission that would bring the Space Shuttle and a “teleoperator” (a sort of IUS stage) to Skylab was thwarted by the fact that the Shuttle was not yet ready to launch. Had it happened, this proposed mission would have served as STS-2, and would’ve boasted Fred Haise and Lousma as commander and pilot, respectively.

While ground controllers looked for ways to remotely extend Skylab’s life, increased solar activity soon proved to be the death knell for America’s first space station, and it came down over Western Australia in July 1979. Searching For Skylab also shows footage of ground controllers (and Gibson) somberly observing the reentry.

These nuggets – and more – are available to view in Searching For Skylab, now streaming through Vimeo. (For transparency’s sake, this author served as technical adviser for the documentary.)