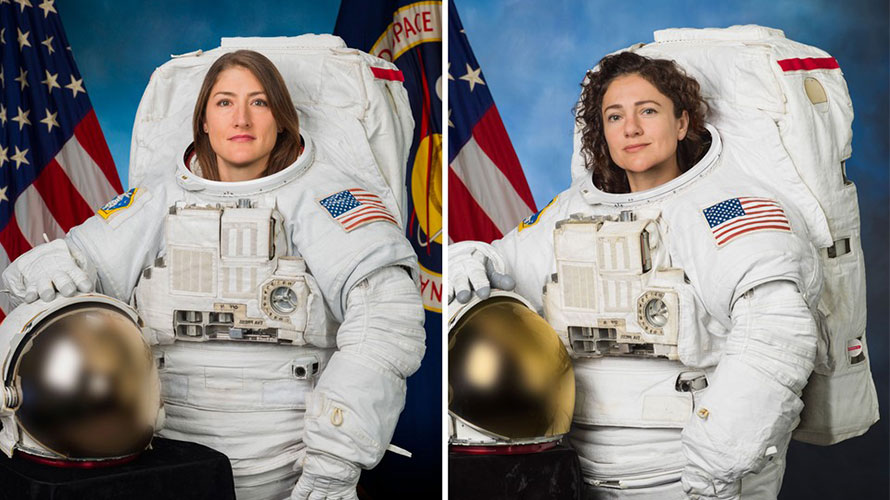 In what will likely be one of the final “firsts” in Earth-orbital spacewalking, at 7:38 a.m. EDT yesterday, astronauts Christina Koch and Jessica Meir switched their spacesuits to internal power and made history, conducting the first all-female spacewalk. The astronauts were tasked with replacing a failed power controller on the International Space Station (ISS), and the Extra Vehicular Activity (EVA) lasted a total of seven hours and 17 minutes. It was Dr. Meir’s first spacewalk and Koch’s fourth.

Koch was originally scheduled to perform an EVA with astronaut Anne McClain to upgrade the power systems of the ISS on March 29 earlier this year; however, due to a recommendation made by McClain pertaining to the size of her spacesuit, the spacewalk was reassigned to astronaut Nick Hague, who joined Koch as they updated the station’s power technology.

Dr. Meir was born and raised in Caribou, Maine and holds a doctorate in marine biology. Prior to being selected by NASA in 2013, she conducted research on the physiology of animals in extreme environments and took part in numerous diving expeditions, including a Smithsonian Institution expedition to the Antarctic and Belize. From 2000 to 2003, Meir worked for Lockheed Martin’s Human Research Facility supporting human physiology research on the space shuttle and ISS, and participated on research flights on reduced gravity aircraft and served as an aquanaut crew member for the fourth NASA Extreme Environment Mission Operations (NEEMO) mission. Dr. Meir is also the first Jewish woman to perform a spacewalk and is being celebrated among Jewish communities worldwide.

Koch was born in Grand Rapids, Michigan and raised in Jacksonville, North Carolina. She holds a Master of Science in Electrical Engineering. Prior to becoming an astronaut in 2013, Koch worked in space science instrument development and remote scientific field engineering. She worked at NASA Goddard Space Flight Center’s Laboratory for High Energy Astrophysics and later for the United States Antarctic Program as a Research Associate. She also worked with the National Oceanic and Atmospheric Administration as a Field Engineer and a Station Chief. She is slated to set a record of the longest spaceflight by a woman with an expected total of 328 continuous days in space, which will provide researchers the opportunity to observe the effects of long-duration spaceflight on a female to prepare for human missions to the Moon and, eventually, Mars.

Dr. Meir and Koch’s spacewalk was the 221st to be performed in support of space station assembly. They replaced a battery charge/discharge unit (BCDU) that failed to activate after new lithium-ion batteries were installed on the space station’s Integrated Truss Structure. These units regulate the charge put into the batteries collecting energy from the station’s solar arrays. All three of Koch’s previous EVAs have also dealt with the station’s power and electrical power systems, making her the most qualified astronaut aboard the station for the spacewalk.

The spacewalk is one of a series of spacewalks scheduled to replace the station’s original nickel-hydrogen batteries with new lithium-ion ones, which are part of the station’s solar power network. The batteries’ location makes it impossible to use either Canadarm2 or the Orbiter Boom Sensor System (OBSS) arm, as it does not have the grapple fixtures needed to remove and replace the failed BCDU, which will return to Earth on a future SpaceX Dragon for analysis.

The astronauts’ spacewalk was celebrated around the globe and generated much anticipati0on toward NASA achieving its goal of putting a man and the first woman on the Moon within a few years. “History was made today. Use this as an opportunity to inspire others and to be inspired. This is an important milestone in human spaceflight, and these women are both incredible role models for the future generation of space explorers,” said Canadian Space Agency Flight Controller Kristen Facciol, who provided ground support from NASA’s Mission Control at the Johnson Space Center.

NASA astronaut Tracy Caldwell Dyson, who has logged over 22 hours in three spacewalks, said, “I think the milestone is that hopefully this will now be considered normal, not to overshadow the fact that women have been doing spacewalks for 35 years. We train like this every day, so it’s pretty normal, and we just hope that this is a start to that.”