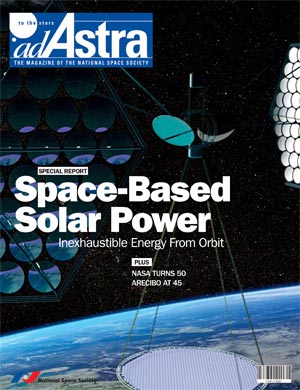 Return to Back Issue Index
On The Cover: A solar power satellite orbits 22,240 miles above the Earth, collecting the sun’s energy and transmitting it safely to the surface in this illustration from artist Kris Holland.

Additional information on Space-Based Solar Power is available on our website.

Note: The entire Special Report on Space-Based Solar Power (comprising the first five articles listed below) is available as a PDF file [1.5 MB]. The links below provide additional information.

18
ENERGY FROM ORBIT
The technology now exists to place great orbiting platforms in space, where they can capture solar energy and redirect it to receivers the size of airports on Earth.
By John C. Mankins

26
AN ENERGY PIONEER LOOKS BACK
The man known as the “father of solar power satellites” reflects on the beginning of it all. An interview with Dr. Peter Glaser.
By William Ledbetter

28
STRATEGIC IMPORTANCE
Solar power from space can help keep the peace on Earth.
By the Space-Based Solar
Power Study Group-the Caballeros
See the full report on Space-Based Solar Power As an Opportunity for Strategic Security

32
A NEW COALITION
The NSS announces the Space Solar Power Alliance.
By Arthur Smith
Correction for end of article on page 33: Gen. Armor is called a “past president” instead of “former director” of NSSO.

34
ON THE MOON
Lunar materials can play a major role in the development and launch of solar power satellites.
By Al Globus

38
50 AND COUNTING
NASA celebrates five decades and Ad Astra joins in with a timeline that includes landmarks in NSS history.
By Katherine Brick, Marianne Dyson, David Brandt-Erichsen, and Mark Hopkins

11
LETTER FROM THE EDITOR
Looking Up
By Mark Mayfield

51
LETTER FROM THE
EXECUTIVE COMMITTEE
Space & Energy: A Catalyst for Creating a Positive Future
By Gary Barnhard, Chairman of the Executive Committee

54
PROFILE
David Brandt-Erichsen
Getting the Word Out Worldwide