Approaches And Landings: Fred Haise During The 1970s, After Apollo 13 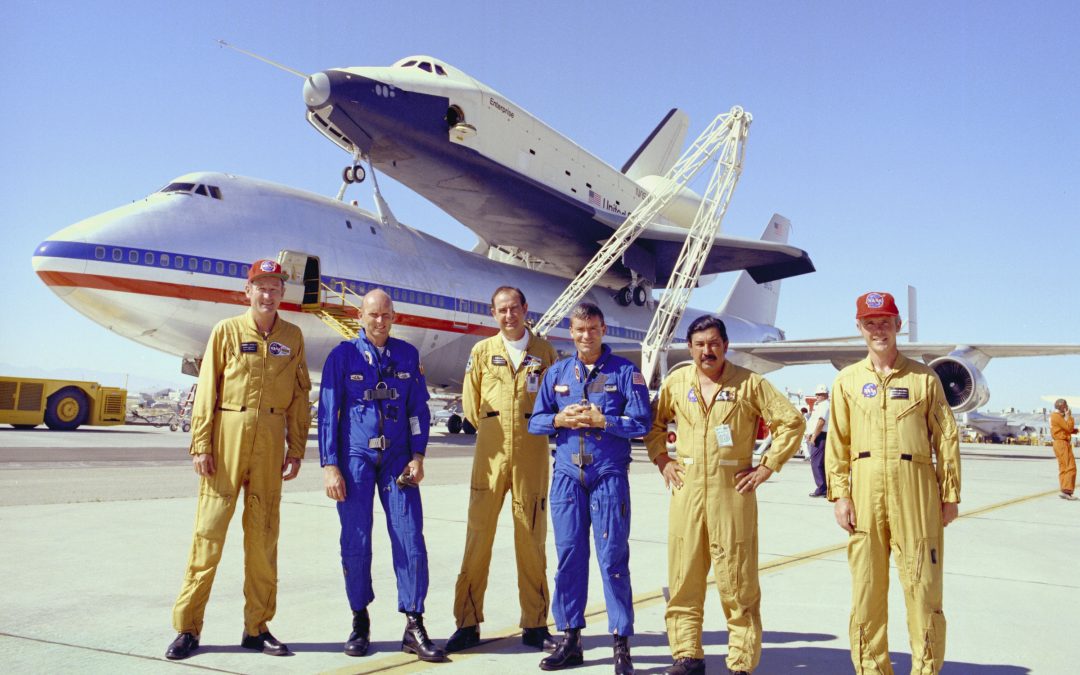 The engine is the heart of the airplane, but the pilot is its soul. Author unknown

Fred Haise may be best known as the Apollo 13 lunar module pilot who, along with crew mates Jim Lovell and Jack Swigert, survived one of the most harrowing emergencies in spaceflight history – the explosion of an oxygen tank on CSM Odyssey, which forced the crew into lifeboat mode aboard LM Aquarius. While Haise and crew safely splashed down in the South Pacific Ocean on April 17, 1970 thanks to a combined contingency effort by both crew and ground, this wouldn’t be his last brush with death during the 1970s. Haise would become a living symbol of what a human being could endure, and all that could be accomplished following a period of adversity. While scores of spaceflight enthusiasts define Haise’s career by the events that unfolded nearly 50 years ago this month, this author feels many are distracted by Apollo 13, and forget what I think are Haise’s shining moments – as one of the commanders of the Space Shuttle Approach and Landing Tests (ALT).

Three years after his return to Earth, Haise was piloting a World War II era plane – a Vultee BT-13 – on August 22, 1973. The Apollo lunar missions had ended nearly nine months previously, and NASA was deep into its second Skylab mission by this point. According to a New York Times article from that day, the plane was “…owned by the Confederate Air Force, an organization of airplane buffs.” Like many of his colleagues, Haise enjoyed flying a variety of aircraft, including vintage warbirds. After an engine quit on him – which had happened to him before during his aviation career in other planes – Haise calmly attempted to take the plane into a clear dirt field. However, according to the book Into The Black by Rowland White, “Because of the angle of his approach, Haise was unable to see the deep foundations already dug into the ground.” The area was actually – and unfortunately – a construction site. White wrote, “As he gently dead-sticked the BT-13 onto the deck, one of the main wheels dropped into a trench and threw the little plane into a cartwheel before it landed upside down, skidding backward along the surface. Then it caught fire. And the cockpit was jammed shut.”

Haise was in serious trouble. It took just moments for him to assess the situation, and he began to, according to White, “kick his way through the Plexiglas canopy” to evacuate the burning aircraft. He may have walked out of the plane, but he’d suffered second- and third-degree burns across 65 percent of his body, and spent several months at the University of Texas Hospital in a burn unit, receiving treatments to minimize scarring. He received frequent visits from family, friends, and NASA colleagues to bolster his spirits. The visits and treatments worked, and after an extended period of recovery, Haise reemerged from this experience determined to fly again.

Fast forward to August 12, 1977: less than four years after Haise’s nearly fatal accident, he was now in command of one of the most ubiquitous “airplanes” of them all – the Space Shuttle Enterprise. Wearing an oxygen mask and sitting by pilot Gordon Fullerton, he was readying the Shuttle for separation from the Shuttle Carrier Aircraft (SCA), which was being maneuvered by pilot Fitz Fulton. In a piece Haise authored for Quest magazine in 2019, he stated, “There was a little concern about the fidelity of the primary flight control system as our first real look at its performance was after we separated.” Indeed, according to Into The Black, “In Enterprise’s cockpit, before the blast of the separation had even finished resonating through the fuselage, an ugly green ‘X’ flashed up on the CRT 2 [cathode ray tube 2 computer screen] display between the astronauts, signaling the failure of one of the Shuttle’s flight control computers. As Haise flew her for the first time, the harsh tone of the master alarm provided a soundtrack.”

Haise, however, was a former Marine, and did what Marines are trained to do during possible emergencies: aviate, navigate, and communicate. In Quest Haise wrote, “The pressure that I felt was not for my safety and physical well-being, as Gordo Fullerton and I were sitting in ejection seats that would assure our escape should one of those ‘unknowns’ in the first flight of a new vehicle come up. Those who were taking the greatest risk of their lives were the crew in the 747 aircraft…Fitz Fulton, Tom McMurtry, Skip Guidry, and Vic Horton. They were not sitting in ejection seats!” True to form, Haise was more worried about the SCA crew than what he and Fullerton were enduring. But five minutes and 22 seconds following the separation and ensuing hairy alarm, Haise and Fullerton brought Enterprise safely home, gliding her smoothly onto the lake bed at Edwards.

Between August 12 and October 26, 1977, Enterprise made five free flights (author’s note: more comprehensive histories of the Shuttle Approach and Landing Test program can be accessed via Quest 26:1 2019, and Dennis Jenkins’ Space Shuttle: Developing an Icon, 1972-2013). Astronauts Joe Engle and Richard Truly flew two of the five free flights in September and October respectively, while Haise and Fullerton flew three.

The last flight, for Haise, would be particularly memorable. Into The Black revealed the struggles he fought during this flight: “Haise faced a convergence of problems. There was an inherent lag in the fly-by-wire control system between the commands of the pilot and the reaction of the control surfaces. A quarter of a second at most, but enough for a pilot under pressure to notice…[m]ost importantly, the orbiter’s computers didn’t have the capacity to cope with every input made by the pilot. The software prioritized pitch – up or down – over roll; if it was busy with the former, the latter had to wait its turn.” In straightforward terms, this meant when Haise landed, a pilot-induced oscillation (PIO) made by him in an attempt to better control the vehicle caused Enterprise to “bounce.” For those interested in seeing what this looked like, a low-resolution film exists of this landing on YouTube, although it appears sped up.

Haise explained in Quest, “[There was] my error over-controlling pitch to hit a spot on the runway that resulted in an ensuing PIO or pilot induced oscillation after a bounce landing. Software mods were made to assure that no control axis would be locked out due to rate limiting.” It bears mentioning that the ALT program was a flight test program, and any errors or “funnies” discovered during this testing phase needed to be worked out to ensure success of the space-worthy orbiter, Columbia, which at that time was being slated for a 1978 debut launch. Haise’s PIO brought to light problems with the digital fly-by-wire system the Shuttle depended upon during its landing phase, and proved to aid the program. In March 1978, Haise was announced as one of the first four shuttle commanders.

Shortly thereafter, NASA became all-too-aware that Skylab, its first space station, would soon fall out of orbit due to increased solar activity. While Skylab’s robust computer system was “rebooted” in an effort to minimize drag upon the space station, a tentative plan was devised to save the ailing spacecraft via an Inertial Upper Stage called the Teleoperator Retrieval System, which would be remotely maneuvered to Skylab in an effort to boost its orbit for potential reuse. The two tapped to helm this mission, tentatively called STS-2A, were to be Haise and Skylab 3 veteran Jack Lousma. Lousma could have become the first person to visit Skylab twice, on two separate occasions. Both astronauts started training for this audacious “rescue” mission of sorts, which boasted incredible concept art bordering on science fiction visions.

I wrote “could have,” because this scenario was not to be. By late 1978, two things were apparent: 1) the Shuttle wasn’t close to being flight ready, and 2) Skylab would become a victim of one of the very things it studied: the Sun. By 1979, Haise resigned his NASA post and took a position at Grumman Aerospace, ironically the company that built Aquarius, his 1970 lifeboat.

1995’s Apollo 13 blockbuster movie by director Ron Howard again skyrocketed Haise to fame; his portrayal by actor Bill Paxton resulted in many spin offs, including TV appearances and even merchandise (an Apollo 13-themed doll released around this time suspiciously looks like Paxton as Haise). While the retired astronaut continues to make public appearances and is still very much active within the spaceflight community, he seems most at ease discussing his career as an experimental pilot, and what he accomplished during ALT. As he enthused in his Quest piece, “The first release flight or Free Flight 1 was made within two weeks of the date set in a program schedule released two years earlier, and the program was completed several months sooner than planned.” This author believes Haise deserves recognition as the first Shuttle Program commander.

Featured Photo Credit: NASA, July 26, 1977. “The flight crews of the space shuttle prototype Enterprise and NASA’s modified Boeing 747 Shuttle Carrier Aircraft gathered in front of the piggyback pair following the final captive-carry flight in the shuttle Approach and Landing Tests on July 26, 1977. The landing gear of Enterprise was lowered during the final portion of that captive-carry flight to verify that it functioned properly. Five free-flight tests of Enterprise would follow over the next three months, validating the shuttle’s ability to make a precise unpowered runway landing upon its return from space. The SCA crew is in the yellow suits and the Enterprise crew in the blue suits. From left, they are SCA pilot-in-command Fitz Fulton, Enterprise pilot-in-command Gordon Fullerton, SCA flight engineer Vic Horton, Enterprise pilot (and Apollo 13 veteran) Fred Haise, SCA flight engineer Vincent Alvarez, and SCA co-pilot Tom McMurtry.”