April 23 Apollo 16 Breakfast on the Moon 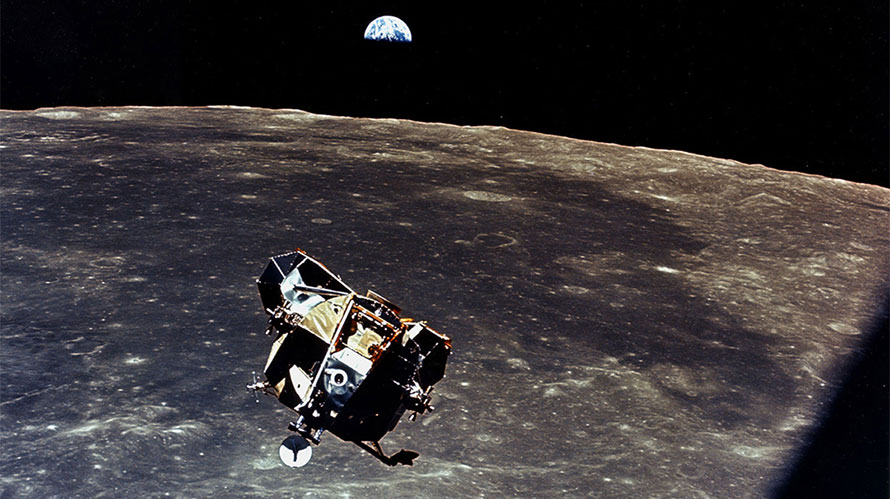 You are cordially invited to virtually celebrate the 50th anniversary of Apollo 16’s landing on the Moon. The Sacramento L5 Society, in cooperation with the NSS Chapters’ Assembly, are tremendously excited to announce the participation of four very special guest panelists. Our guests include historical archaeologist Lisa Westwood and Professor Beth O’Leary as speakers, NSS President Michelle Hanlon as Lead Panelist, and Michelle Wilmot as Guest Panelist (see below for bio’s). All four have done seminal work in the area of preserving space heritage sites, and will discuss possible ways to memorialize and preserve heritage sites on the lunar surface, including the Apollo mission sites. Lisa and Beth successfully listed Tranquility Base objects with the California Register of Historical Resources and the New Mexico State Register of Cultural Properties, Michelle Hanlon co-founded For All Moonkind (forallmoonkind.org), a non-profit organization that seeks to protect sites in outer space as part of our common heritage, and Michelle Wilmot led the campaign to have the Lunar Rover Vehicles receive designation as a Washington State Historic Landmark. To end our celebration, NSS Downlink Editor Fred Becker will share his live video of the Apollo 16 launch.

Register for this free Zoom webinar HERE. After registering, you will receive a  confirmation email containing information about joining the webinar. 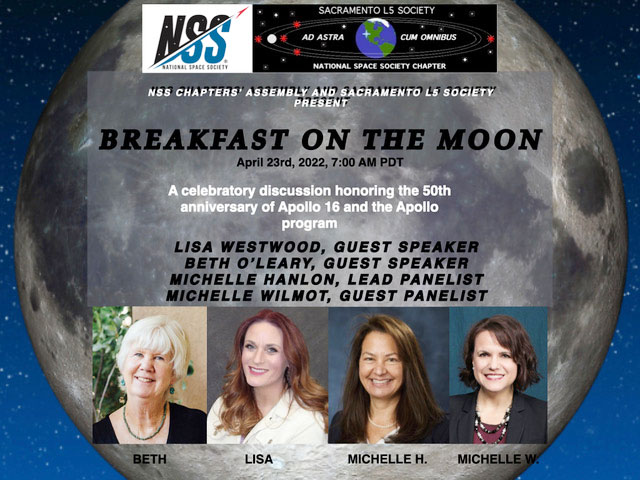 Lisa Westwood is a Registered Professional Archaeologist with over 26 years of experience in cultural resources management, serving as Vice President and Director of Cultural Resources for ECORP Consulting, Inc., where she specializes in historical archaeology, including Cold War-era aerospace installations, and regulatory and legal compliance with applicable historic preservation law. She is the co-founder of the Apollo 11 Preservation Task Force, composed of preservation professionals who advocate for preservation of space heritage as a cultural landscape. With Beth Laura O’Leary and M. Wayne Donaldson, she led the effort to list the Objects Associated with Tranquility Base on the California Register of Historical Resources and New Mexico State Register of Cultural Properties, which was achieved in 2010, and worked with members of Congress to propose the site designated a National Historic Landmark. She authored the 2014 resolution by the State of Hawaii to designate July 20 as Tranquility Base Day. She has been featured or appeared in numerous media reports and interviews on national radio, print, and television, including National Public Radio, The Blue Dot, California Life with Heather Dawson, Reuters International, the Washington Post, and Space Times Magazine, among many others. She was an invited panelist for the NASA and the Smithsonian Institution’s “Key Moments in Human Spaceflight Symposium” at NASA Headquarters. She is well-published in the field of space history, including the senior author of her most recent book, titled “The Final Mission: Preserving NASA’s Apollo Sites,” published by the University Press of Florida in 2017. She is a contributing author to Archaeology and Heritage of the Human Movement into Space (2014, Springer Press), several articles and book reviews in Space Times Magazine and Quest: the History of Spaceflight, and an opinion piece for the Washington Post in 2012. She presently teaches in the anthropology departments at California State University-Chico and Butte College.

Dr. Beth O’Leary is Professor Emerita, New Mexico State University (NMSU) in the Anthropology Dept. (Ph.D., Anthropology at the University of New Mexico. She investigates the cultural heritage of the Moon and is one of the creators of the field of Space Archaeology and Heritage. With a grant from the New Mexico Space Grant Consortium (NASA), she focused on the archaeological assemblage and preservation of the Apollo 11 Tranquility Base site on the Moon. Through her efforts, the New Mexico Laboratory of Anthropology listed the first lunar landing site in the state’s archaeological database. She successfully nominated the first lunar landing site to the New Mexico Register of Cultural Properties in 2010. Dr. O’Leary was the elected vice chair of the Cultural Properties Review Committee, appointed by the Governor of New Mexico (2003 – 2011). Since 2021 she has been the elected vice chair of the New Mexico Museum of Space History Commission as well as serving on the New Mexico History Museum Advancement Committee. At NASA’s invitation, she worked with their scientific team to produce “NASA’s Recommendations to Space-Faring Entities: How to Protect and Preserve the Historic and Scientific Value of U.S. Government Lunar Artifacts” (2011). In 2012, she received an award from NASA for that work.

O’Leary’s books include: (2017) The Final Mission: Preserving NASA’s Apollo Sites, (with L.Westwood and M.W. Donaldson), University Press of Florida.; (2015) The Archaeology and Heritage of the Human Movement into Space (with co-editor, P.J. Capelotti), Springer International Press; and (2009) The Handbook of Space Engineering, Archaeology and Heritage (with co-editor A. G. Darrin,) CRC Taylor & Francis Press. She has chaired and participated in many international symposia: Society for American Archaeology, World Archaeology Congress and ICOMOS Australia. She serves on the advisory boards of Springer Press Space and Society Series and METI. She is currently on the ICOMOS Aerospace Heritage Task Force. A pioneer in this field, she has been interviewed by world media, including among others: Ars Technica, Dagbladet (Norway), LA Times, La Stampa, National Geographic, New York Times, Scientific American, Sunlife (China), NPR, Deutsche Radio, Canadian Broadcasting Corporation, and the Australian Broadcasting Corporation and written pieces for the BBC, Antiquity, and the Washington Post.

Michelle L.D. Hanlon is Co-Director of the Air and Space Law Program at the University of Mississippi School of Law and its Center for Air and Space Law. She is the Editor-in-Chief of the Journal of Space Law, the world’s oldest law journal dedicated to the legal problems arising out of human activities in outer space. She is also the Editor-in-Chief of the Journal of Drone Law and Policy, the first legal journal focused on law and regulations governing the operation and use of uncrewed aircraft in both civilian and military capacities. Her research and advocacy centers upon the concept of “due regard” in space law and evolving the framework necessary to assure that human exploration of space is responsible, successful and sustainable. In this regard she has done considerable work and written and presented extensively on topics related to orbital debris remediation, space solar power, small satellite constellations, environmental considerations and the protection of human heritage in space.

Michelle is also Co-Founder and President of For All Moonkind, Inc., a nonprofit corporation that is the only organization in the world focused on obtaining international legal recognition for and protection of human cultural heritage in outer space. In this capacity, she was instrumental in the development of the One Small Step Act in the United States, the first national legislation to acknowledge the existence of human heritage in outer space. For All Moonkind has been recognized by the United Nations as a Permanent Observer to the United Nations Committee on the Peaceful Uses of Outer Space and Michelle contributes regularly to the international discourse on space law through the Committee. Most recently, Michelle urged the United Nations to recognize and adopt temporary heritage protection zones around certain sites on the Moon as part of a legal framework for space resource utilization. Under Michelle’s leadership, more than 100 space law and heritage law experts from every inhabited continent contribute their valuable time and experience to advance For All Moonkind’s important mission.

Michelle received her B.A. in Political Science from Yale College and her J.D. magna cum laude from the Georgetown University Law Center. She earned her LLM in Air and Space Law from McGill University where the focus of her research was commercial space and the intersection of commerce and public law. Prior to focusing on aviation and space law, Michelle was engaged in a private business law practice. Her legal career commenced with the restructuring of sovereign debt for a number of South and Latin American countries and evolved into the negotiation and implementation of cross-border technology mergers and acquisitions. Her subsequent solo practice advised entrepreneurs across four continents on all aspects of bringing their innovative ideas to market: from basic corporate formation to financings and buyouts. Michelle continues to provide advice and counsel in respect of all aspects of air, space and cyber law through the consulting firm of ABH Aerospace, LLC.

Michelle Wilmot is an award-winning communications, government relations and economic development professional with a diverse background in both the public and private sectors. She is the economic development marketing manager for the City of Kent, Washington, home of Boeing’s original Space Center and birthplace of the Lunar Rovers, as well as Blue Origin’s corporate headquarters.  She leads the City’s effort to build awareness about Kent-based companies’ past and present in both aero and outer space innovation.

To shine a light on the Kent’s legacy in space exploration, she lead a year-long public relations campaign coinciding with the 50th anniversary of NASA’s Apollo 11 mission which included fundraising for a space-themed park featuring an interactive Lunar Rover, public appearances and national media interviews with original Lunar Rover engineers and Boeing executives, and in partnership with NASA, Boeing, Blue Origin and 21 non-profits, she planned and executed a STEM festival where the Lunar Rover replica was unveiled to over 1,800 enthusiastic kids. The campaign culminated with the Washington State Advisory Council on Historical Preservation designating the three Lunar Rovers on Moon as Historic Landmarks, making Washington only the third state in the country to have lunar objects designated as such.

Prior to joining the City, Michelle worked in public affairs consulting where she helped private companies navigate government processes and political issues.  She has developed and managed communications programs for Fortune 500 companies, as well as public sector campaigns including passage of multimillion dollar bond measures for hospitals and school districts.

She is member of the national City-County Communications and Marketing Association and the Public Relations Society of America. She earned a BA in Business Administration from City University with an emphasis in marketing.

She and her husband live in Renton, Washington, home of Boeing’s 737 and the Seattle Seahawks.