In 1977 the L5 Society published two posters of the Bernal Sphere which included a text description of the design. This description is given below, complete with the optimistic predictions that these could be built by the 1990s! The text was written by Dick Fredericksen based on his interview of Gerard O’Neill. 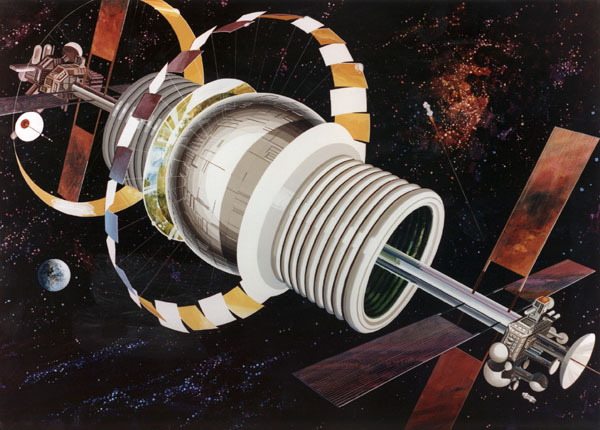 Built to accommodate some 10,000 people, this “Bernal Sphere” space colony would serve as the residential area of a space manufacturing complex. The inhabitants would conduct a variety of manufacturing activities in space  some located within the structure shown here, others in nearby reaches of space. For example, a major industry is expected to be the provision of clean, inexpensive power, generated at satellite solar power stations and transmitted by microwave to Earth.

In the picture, “home” is to be found within the spherical portion. There is more than meets the eye: the visible surface is an outer shell which shields the habitat from cosmic rays and solar flares. This shell is accumulated from the slag of industrial processes, which are carried out using lunar surface material as input. Inside the shell, an inner sphere, almost a mile in circumference, rotates to provide “gravity” comparable to that of the Earth. Residents’ homes stand upon the inside surface of the inner sphere.

The structure at the two ends of the axial portion are docking areas and the sites of zero-gravity manufacturing. The flat, paddle-like fixtures radiate away the waste heat of the habitat into the cold of outer space. Nearer to the sphere, the stacked rings are agricultural areas, helping provide for the needs of the workforce. Here agricultural crops, far less sensitive to radiation than humans would be, are grown in the intense sunlight of space. The simulated “gravity” in these areas is about 0.7 that of the Earth; the atmospheres are optimized for the growth of various crops.

The slightly curved plates, arranged in a circle surrounding the sphere, are the second stage in a series of mirrors which bring sunlight into the habitat at controlled hours. At a locus outside the picture, the mirrors of the first stage govern the “day-night” cycle. The second-stage mirrors pass the light at a desired angle to the ring-shaped mirrors capping the sphere. From these last, finally, the sunlight is directed into the interior of the sphere.

In the 1976 NASA Study on Space Manufacturing, habitats of this type, very efficient in their use of materials for shielding, are thought of as next steps beyond more utilitarian structures. An earlier stage of development would involve shielded versions of the agricultural areas shown here.

It is thought that habitats of this type will be technically feasible towards the end of this century, possibly by the early 1990s. One calculation has indicated that with the level of industrial activity which is contemplated for space by that time, and with the means of transportation by then available, construction of such a habitat could proceed in about two months. Accumulation of the shield would take place over the ensuing two years. 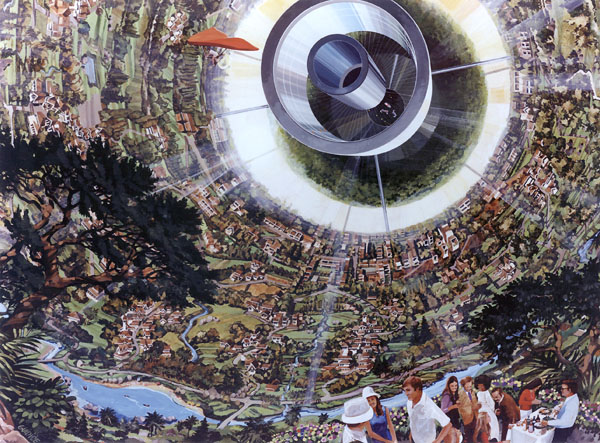 Towards the end of this century, possibly by the early 1990s, the workforce of a space manufacturing complex may well enjoy living quarters of the sort pictured here. By then, it is thought, manufacturing in outer space can be a substantial enterprise. Some major industries which are foreseen at this time are zero-gravity manufacturing and the provision of clean, inexpensive power. Power would be generated at satellite solar power stations and transmitted by microwave to Earth.

The habitat design shown here, made visual by NASA artist R. Guidice, is known as a “Bernal Sphere.” Houses, lawns, trees, people, and all – a community of some 10,000 people – rest upon the interior surface of a large sphere, nearly a mile in circumference. The entire sphere rotates at about 1.9 RPM, producing centrifugal force as a substitute for gravity. At the equator, this simulated “gravity” is of about Earth-normal intensity. Away from the equator, it tapers off, diminishing gradually to zero at the poles. This offers the inhabitants some unusual recreational opportunities: human-powered flight, for example, and zero-gravity sports.

Near the equator of the rotating habitat wanders a small river whose shores are made of lunar sand. Natural sunshine is brought in through external mirrors. Inhabitants can have the “weather” they prefer, without worrying about its effect upon the crops: agriculture is conducted in neighboring edifices, outside the spherical portion of the habitat.

For the short distances within the space habitat, automobiles would be unnecessary, and transport would be on foot or bicycle. A climb from the equator past the small villages on the hillsides, to the rotation axis where gravity would be zero, would take about twenty minutes. A corridor at the axis would permit floating in zero-gravity out to external structures, such as the agricultural areas, the observatories, the docking ports, and contiguously located industries. Part of the workforce would take various means of conveyance to more remote worksites, such as a satellite solar power station, some kilometers off in space.

In the 1976 NASA Study on Space Manufacuring, habitats of this kind, efficient in their use of materials and structurally strong, are thought of as possible next steps beyond earlier, transitional structures of a more utilitarian design. The economics of space manufacturing appear to motivate the provision of attractive living areas of this kind relatively early in the program, rather than coming for short tours of duty at high cost for transportation.