The Stanford Torus was the principal design considered by the 1975 NASA Summer Study, which was conducted in conjunction with Stanford University (and published as Space Settlements: A Design Study, NASA Publication SP-413). It consists of a torus or donut-shaped ring that is one mile in diameter, rotates once per minute to provide Earth-normal gravity on the inside of the outer ring, and which can house 10,000 people. 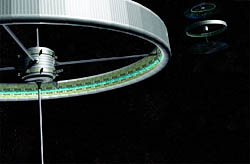 “Vademecum” is a 2006 student design similar in size to the Stanford Torus but with a more efficient shape. Painting copyright by Dan Roam courtesy of the artist. 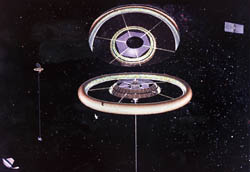 Stanford Torus external view. The overhead mirror brings sunlight into the colony through a series of louvred mirrors on the inner ring. Painting by Don Davis courtesy of NASA 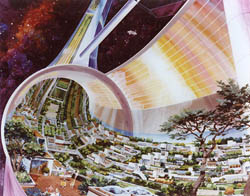 Stanford Torus cutaway view. The rotation of the torus provides Earth-normal gravity on the inside. Painting by Rick Guidice courtesy of NASA. 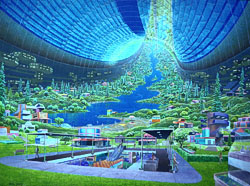 Stanford Torus interior. It seems unlikely that early colonies will have a population density this low. Painting by Don Davis courtesy of NASA. 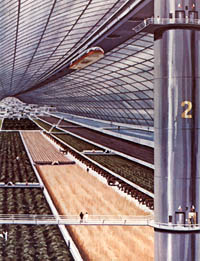 Stanford Torus agriculture, conducted on multiple tiers for efficient use of space. Agriculture in space can be very productive because of the controlled environment. Painting courtesy of NASA. 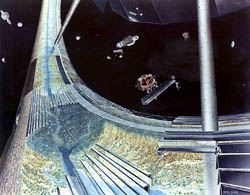 Stanford Torus construction. Depicted is the final stages of installation of the radiation shielding. Painting by Don Davis courtesy of NASA.