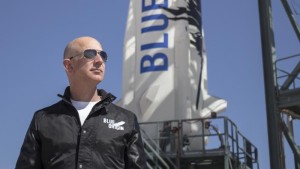 The entrepreneurial company Blue Origin is the winner of the Society’s 2016 Space Pioneer Award for Science and Engineering. This award recognizes the company’s two recent major achievements: (1) The first successful vertical landing by a large rocket which has reached space and carried a payload (an empty passenger capsule which descended separately by parachute). This flight by the New Shepard vehicle occurred on Nov. 23, 2015 at the company’s test range near the remote West Texas town of Van Horn. (2) Subsequently, the same rocket was flown again and performed a second perfect landing in January 2016, which constitutes the first re-use of a large rocket which has reached space. Creating reusable rockets has been the “holy grail” for many in the space industry for decades, and is a fundamental requirement for spaceflight to be inexpensive enough for general and large scale use.

Mr. Rob Meyerson, the company’s President, will accept the award in the name of Blue Origin on May 22 at the National Space Society’s 2016 International Space Development Conference® (isdc2016.nss.org). This will be the 35th ISDC and will be held in San Juan, Puerto Rico, at the Sheraton Puerto Rico Hotel and Casino. The conference will run from May 18-22, 2016. NSS invites the public to attend ISDC and witness this award presentation.

About Blue Origin and Its Reusable Rocket Development Program

Blue Origin is a privately funded company set up by entrepreneur Jeff Bezos. It designed and built the single stage New Shepard rocket as a means of developing a reusable vehicle and to provide sub-orbital launch services for passengers. The company has about 400 employees at several locations. It intends to build a rocket manufacturing plant near Cape Canaveral in Florida and is developing a new methane and liquid oxygen fueled rocket engine, the BE-4, which will be used to power orbital rockets, including ones of its own design. The company’s name refers to the Blue Planet: Earth, the origin of humanity. It has a headquarters in Kent, Washington, near Seattle.