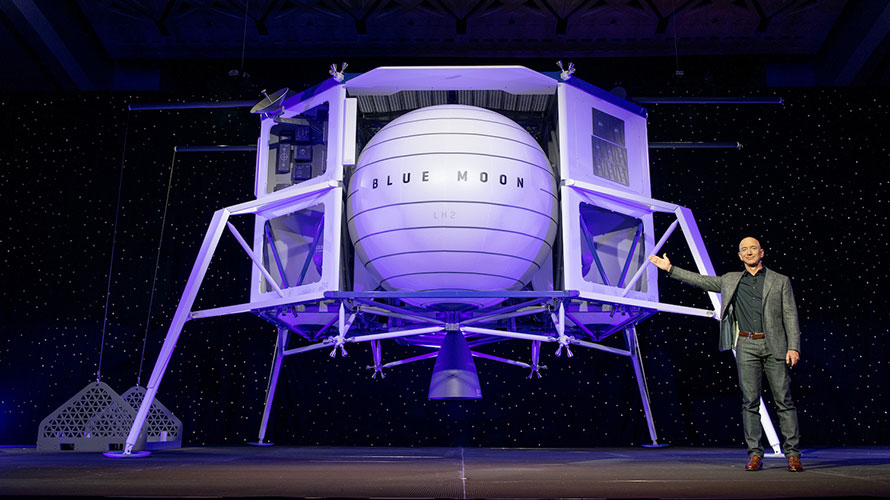 The Washington Post (owned by Jeff Bezos) published a January 31 editorial, “NASA keeps falling victim to presidential whims,” which prompted Blue Origin (also owned by Jeff Bezos) to respond with a February 18 ad in the Post with a different point of view.

NASA administrator Bridenstine has praised the Blue Origin ad, saying “Thanks @blueorigin for responding to the @washingtonpost Editorial Board’s ill-informed criticism of NASA’s Moon to Mars efforts. @POTUS Trump & @VP Pence have laid out a vision to use the Moon as a proving ground for missions to Mars, which enjoys bipartisan support in Congress.”

The Blue Origin ad is reproduced below:

Recently, the Washington Post editorial board cited presidential whim as being at the heart of today’s efforts to push for greater United States leadership and focus in space.

That view is representative of uninformed critiques that come from many corners and have helped stymie well-intentioned prior efforts to move our nation forward into space. It fails to recognize the massive shifts in the space industry that allow us to make greater strides and the emerging threats that require us to re-double our efforts.

Last year, the celebration of the 50th anniversary of the Apollo landing on the Moon reminded us of the great pioneering capabilities and innovation that the U.S. has always demonstrated. But the first steps of Apollo were just that – the first steps in an unprecedented journey that is just beginning.

Real-time understanding of the world around us – from GPS navigation to tracking a contagion to climate change to news events – relies on space networks. Credit card and banking transactions get processed through satellite links. Even the global stock markets rely on the timing signals from satellites to coordinate transactions. Space is an invisible but vital force in how we all live in this modern world.

SPACE HAS BECOME A CONTESTED DOMAIN.

In the past, the ability to utilize the benefits of space was solely determined by the ability to get there. In recent years, however, the number of countries with assets in orbit and active space programs has made threats to our national assets real. China’s space dominance objectives and the rise of hypersonic weapons heighten the need for resilient space assets. The U.S.’s economic and security interests have never relied more on space than they do today.

SPACE HAS BECOME A PLACE FOR ENTREPRENEURS AND INVESTORS.

Morgan Stanley estimates that the global space industry will triple from revenues of about $350 billion per year to over $1 trillion over the next 20 years. According to the Space Angels network, cumulatively $22.3 billion has now been invested in nearly 500 unique space companies since 2009. It is clear that a true space economy exists and is expanding.

Space tourism and small satellite markets have spurred new systems that are now flying. The development of reusable launch vehicles is driving down the prices of launch and the rate of launches up. The U.S. Air Force is developing and procuring new launch vehicles and services through the National Security Space Launch program and NASA is building the Space Launch System (SLS) for exploration purposes. All of this activity is happening while launch markets for U.S.­based medium to heavy launch providers expand from approximately 35 launches per year during the past ten years to a forecast of 45-80 launches per year in the coming decade.

During his famous speech at Rice University in September 1962, President Kennedy reflected on the historical importance of American leadership in space: “Those who came before us made certain that this country rode the first waves of the industrial revolutions, the first waves of modern invention, and the first wave of nuclear power, and this generation does not intend to founder in the backwash of the coming age of space. We mean to be a part of it – we mean to lead it.”

That kind of leadership is on display across the political spectrum today. It is visible in the President’s Budget Request and in the administration’s re-establishment of the National Space Council. Leadership is also visible in the bi-partisan support that space policy receives in Congress through the establishment of the Space Force, in NASA’s Artemis program for Moon and Mars exploration, and in the policies that allow commercial space industries to flourish. Furthermore, the U.S. national security and intelligence communities have led by elevating our interests in space to be fully equal in importance to land, sea, and air.

New leadership is also coming from industry and individuals. There are a wide variety of companies that are creating new satellite systems and new business models and working through public-private partnerships to advance our collective goals in space. There are individuals providing personal leadership that does not wait on governments to decide and direct. Through their rugged individualism and self-reliance, they are pushing ahead and overcoming any obstacles in their way.

HUMANITY VENTURES INTO SPACE AS A CIVILIZATION ONCE IN ITS HISTORY.

All the forces – economic, political, technological, cultural – are in place for this transition and we are now participating in an historic moment. This inevitable expansion will not be stopped by those that waiver and merely critique, but will be forged by those across government and industry who are unapologetic in their vision, and who are unafraid to build and to dream.