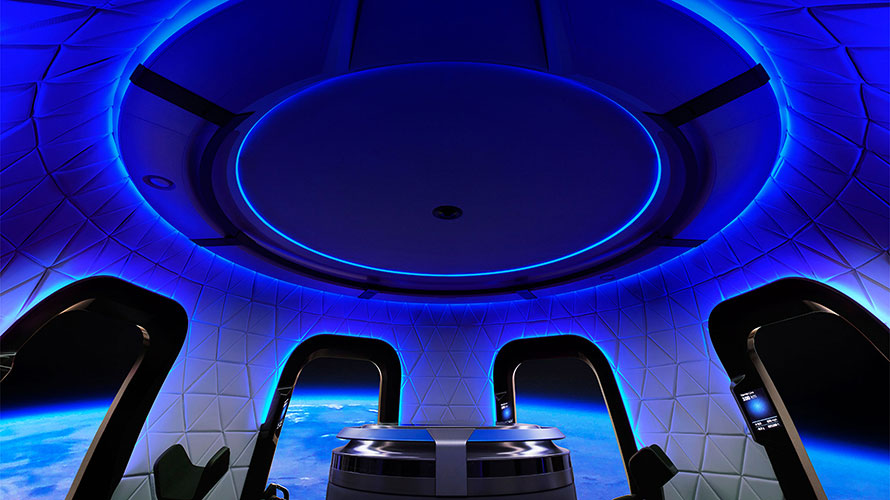 One seat is up for auction.

Today, May 5th, on the 60th anniversary of Alan Shepard’s Mercury 7 suborbital space flight, Blue Origin announced that astronaut flights aboard their New Shepard (NS) suborbital rocket and capsule system will begin this July 20th. Blue Origin is offering one seat for the flight to the public via an auction which began today. Proceeds from the auction will benefit the company’s Club for the Future Foundation. Some or all of the other five passenger seats in the RSS (Reusable SpaceShip) First Step passenger capsule will be occupied by Blue Origin employees. This upcoming flight will be the first time the company has flown someone to space. The previous fifteen NS flights having been successful uncrewed test flights.

In anticipation of today’s scheduled announcement many in the space community expected that Blue Origin would reveal the regular seat pricing for ongoing tourist flights aboard New Shepard/First Step. But that was not the case. No doubt that pricing will remain unknown until after this initial single-seat auction is completed on June 12th for the July 20th flight. Competitor Virgin Galactic had charged $250,000 per seat for the 600 customers who had signed up during earlier sales for upcoming flights aboard their SpaceShipTwo suborbital space plane. Recently Virgin Galactic has stated the seat price will be higher when sales are restarted in the near future. Blue Origin’s regular pricing is expected to significantly exceed Virgin Galactic’s, perhaps somewhere in the $350,000 to $500,000 range. In the coming few months we will probably learn the new pricing from both competitors.

A review of the Terms and Conditions for the Blue Origin Astronaut Experience Auction, as the seat auction for the July flight is formally called, can provide a more complete look at the nature of the flight and the minimum astronaut requirements, especially those found under Section 3, Functional Requirements. These include age, weight, and height restrictions, and information on the levels of g-forces to be experienced on ascent to space and descent back to Earth.

The last New Shepard system flight, NS-15, took place less than a month ago on April 14th and no other flight is anticipated prior to the first astronaut flight on July 20th. If Blue Origin continues their flight nomenclature sequence then that flight should designated NS-16.

In the meantime, within the remaining weeks of this month, Virgin Galactic is expected, after more than a two year pause, to resume powered flights of their suborbital space plane, using either the previously flown SpaceShipTwo version craft named Unity or the new SpaceShip III version craft named Imagine.  Four pilots and one non-pilot employee have flown to space on Unity. Founder Richard Branson is expected to fly this year prior to any paying space tourist, but the timing of these subsequent flights in the coming months is unknown.

And so, since the four Virgin Galactic pilots and employee that have flown to space shouldn’t be counted as paying astronaut-tourists, Blue Origin somewhat surprisingly may initiate the suborbital tourist flight trade on this July 20, which also happens to be the fifty-second anniversary of the Apollo 11 landing on the Moon.