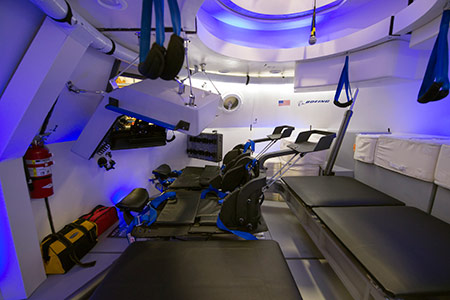 And Space Adventures plans to sell flights on the CST-100, having recently signed a contract with Boeing to that effect. No word yet on cost and availability.

Two NASA astronauts conducted flight suit evaluations inside a fully outfitted test version of The Boeing Company’s CST-100 spacecraft July 22, the first time the world got a glimpse of the crew capsule’s interior.

“The astronauts always enjoy getting out and looking at the vehicles and sharing their experiences with these commercial providers,” said Kathy Lueders, deputy manager of NASA’s Commercial Crew Program (CCP).

“These are our customers. They’re the ones who will take our spacecraft into flight, and if we’re not building it the way they want it we’re doing something wrong,” said Chris Ferguson, director of Boeing’s Crew and Mission Operations and a former NASA astronaut. “We’ll probably make one more go-around and make sure that everything is just the way they like it.”

The CST-100 test vehicle was optimized to seat five crew members, but the spacecraft could accommodate up to seven or a mix of crew and cargo. While the spacecraft may resemble Boeing’s heritage Apollo-era capsules from an exterior perspective, its interior is a reflection of modern technology. From the ambient sky blue LED lighting and tablet technology, the company ensured the CST-100 is a modern spacecraft.

“What you’re not going to find is 1,100 or 1,600 switches,” said Ferguson. “When these guys go up in this, they’re primary mission is not to fly this spacecraft, they’re primary mission is to go to the space station for six months. So we don’t want to burden them with an inordinate amount of training to fly this vehicle. We want it to be intuitive.”

Other innovative element of the CST-100 is its weld-free design, modern structures and upgraded thermal protection techniques. The company said its spun-formed shell reduces the overall mass of the spacecraft as well as the time it takes to build the crew capsule. “I’m really a looking forward to the day when we will be bringing our Expedition crew members home and I won’t need a passport or a visa to go to the landing site and greet them as they come off the vehicle,” Lueders said.