Book Review: 2001: The Heritage and Legacy of The Space Odyssey 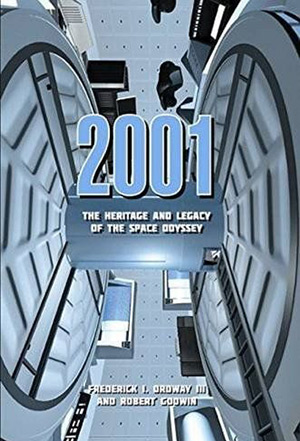 The movie 2001: A Space Odyssey is an epic of spaceflight science fiction. This three-part book examines space fiction in film. Through the author’s insights, readers will gain a more intimate appreciation of the film, and a better understanding of the history of this genre. Parts of the book had previously appeared in Space Fiction and Space Futures Past and Present, edited by Eugene M. Emme and published in 1982.

“Part A: Eight Decades from Méliès to Lucas” is a brief review of previous significant science fiction films presented by Frederick I. Ordway III (1927-2014). Ordway was a long-time member of the NSS Board of Governors. He was an engineer, consultant, researcher, and author on space flight and energy programs, perhaps best known for his work with Wernher von Braun at Marshall Space Flight Center in the 1960s. Ordway was the science consultant for 2001.

“Part B: 2001: A Space Odyssey in Retrospect” is an analysis of the production process from Ordway’s perspective. He describes his initial meetings with Arthur C. Clarke (author of the book on which the movie was based) and Stanley Kubrick (the film’s producer/director). For some this will be the heart of the book, as it describes Ordway’s involvement with Clarke and Kubrick in fashioning the technological aspects of the film.

One of the first challenges of the set designers was to envision equipment and vehicles for the lunar environment—in the days before Surveyor and Apollo 11 revealed the lunar surface composition. There were six very different space vehicles in the movie—from the visionary Pan American shuttle-like passenger rocket to the small space pod of the interplanetary spaceship Discovery. Ordway describes how some of the many characteristics of each were fashioned, often with the help of third-party commercial companies such as General Electric, Honeywell, Bell Laboratories, and even a food preparation paradigm from Whirlpool.

Perhaps it was no coincidence that the name of the human-like disembodied voice of the computer, HAL, is but one character off from the initials of IBM, the computer company that provided technical advice on that aspect of the movie.

NASA was a constant source of information during production, which ran from 1965 to 1967. At one point, the Director of Marshall Spaceflight Center George Mueller and astronaut Deke Slayton visited the studios.

Ordway’s reminiscences are from a diary in which he chronicled the team’s many meetings, usually in restaurants. These gatherings often resulted in script changes that would affect interactions with the equipment—often lifesized props—that had to be revised to ensure realism and believability.

The 2001 movie was composed of three independent segments—the first of which is referred to as ‘the dawn of man’ sequence. There is no dialogue for the first 20 minutes of the film, and that concerned many as to its viability prior to the film’s release.

A few weeks before I started this review Turner Classic Movies ran the film, allowing me to refresh my memory in analyzing Ordway’s comments. I had never perceived that the apes in this first segment represented an evolutionary process that had come to an end, and that they were about to become extinct. It is at this point that the mysterious black obelisk appears and engenders a dawning awareness in one of the apes—“the first intimations of intelligence” according to Ordway. So, are Clarke and Kubrick inferring that without the aid of outside intelligence, random and purposeless mutation had failed?

The book provides several enlightened aspects of the film that I had never recognized. I (and, I suspect, millions of other viewers) originally found the end sequence that supposedly takes place on Jupiter incomprehensible. Especially when the words “Thus spoke Zarathustra” are flashed on the screen for but one second near the end. To understand that phrase you might have to study Friedrich Nietzsche, the death of god, and Zoroastrianism (of which Ordway does not elaborate).

“ Part C: Thirty More Years of Discovery” is authored by Robert Godwin. Godwin is the author and editor of dozens of books about spaceflight. His Apogee publications provide historical perspective on astronautics and science fiction. In this third part, he evaluates and contrasts some of the films that preceded 2001, and many of those produced since. Godwin pulls no punches on his critique of these films and is particularly hard on more recent productions—perhaps because ‘they’ should have learned from the past.

The book is short, easy to read, and helps demystify some of the meaning of 2001. It is a must for those who want to know more about the history of space-based science fiction movies.