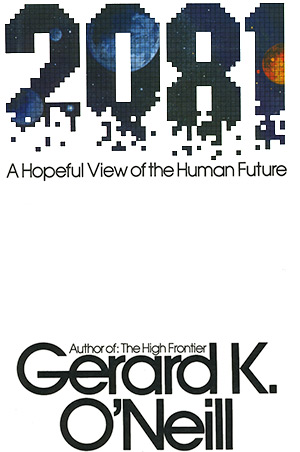 This is the second book by O’Neill on space, although space in this book is a secondary topic. This book is meant to be about the future and space is an important part of that future. His approach to the future in 1981 was:

“To predict the future is at once the most fascinating and the most difficult of challenges. To make an attempt at this time, in the midst of the ferment of change that is the twentieth century, one needs to gauge accurately what further transformations are in store for the world … “

This book is in four parts. The first part is titled “Part One – The Art of Prophecy.” This part is a review of some of the past literature about the future with mention of such authors as Jules Verne, Arthur Clarke and H. G. Wells.

“Part Two – The Drivers of Change” explores the five areas which O’Neill considers to be those areas most concerned about future changes. These five areas are: Computers, Automation, Space colonies, Energy, and Communications.

These areas apply to future human change. Biotechnology might be another area that could be considered. O’Neill was aware of DNA and the structure of the human chromosome, but did not put any emphasis on biotechnology. In part two, O’Neill devotes a chapter to each of his “drivers of change” that make up about a quarter of the book.

I think that his energy section is the best of his five chapters. He writes that “We’ll probably shift during the next century from fossil-dominated energy economy to a healthier reliance on long-term resources. [These include] nuclear fission, nuclear fusion, breeder reactors, and perhaps ocean thermal power [and] satellite solar power. You may be surprised that I don’t list ground-based solar power as a viable option, but I don’t because it is not.”

O’Neill feels that all forms of solar power excluding solar electric cells will not begin to supply enough energy for our needs. And for solar electric cells, we would have to cover Arizona, New Mexico, Nevada and Utah at an immense cost. The book states, “… solar energy received on Earth had always been uneconomical compared to other sources and would remain so.”

“Part Three – Life in 2081” is an attempt to describe everyday life as lived by normal people in 2081. It is a fictionalized account of a man living in a space colony visiting Earth to settle a legal matter. O’Neill states in Part III that “We have explored the drivers of change in Part Two, and now we will see how they will form the world of 2081.”

In Part III, O’Neill uses the physical artifacts in his story to show the changes he expects such as house robots. The space visitor travels long distances using an underground high speed train in a vacuum. The train is supported by magnetic fields allowing the train to travel at 800 miles an hour. He also traveled across the country in an RV controlled by a computer.

The house where the space visitor stayed was well automated. In fact the areas where automation was emphasized was in the home and with transportation. O’Neill only casually mentions automating the farm and factory.

In “Part Four – Wild Cards,” O’Neill gives us some unique ideas about weapons. He likes the use of giant balloons in space which can “support communications platforms, satellite power antennas and magnetic accelerators to launch passenger craft.”

He also delves into some bionics. He mentions cloning and a cure for aging. But he did not emphasize biotechnology.

The book as a whole is a look into the future based on O’Neill’s view of technological advances. He provides some ideas of political systems, but little about sociology or economics. He feels that we must “guard freedom of ideas at all costs.”

I felt that his earlier book The High Frontier made a better case for space colonies and for solar satellite power systems (SSPS). Energy is the key to man’s future and SSPS is the way to go to provide the free energy on Earth’s surface. I felt that Part Three was somewhat redundant. Some of the technical details defining his designs for space colony construction and transportation vehicles were unnecessarily scientific to be appreciated by all readers.

All in all, it’s a good book, but it is somewhat dated. In some ways O’Neill hits the nail on the head with his projections. But in the main, we will have to wait for 2081 to be certain.

Gerard O’Neill was one of the first space enthusiasts to publicize the opportunities of space for energy and colonization. He felt that mankind has a bright future with the utilization of technology and especially space. The High Frontier set the stage for this book. NSS members who share his positive views of space will enjoy reading this book.