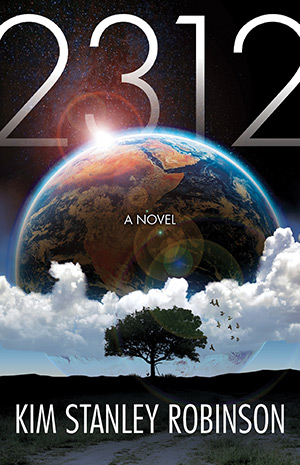 Lions and tigers and bears, and oh my, the sky is full of them! In 2312, humans have reached the heavens and wielded the tools of creation with astonishing results. A domed city on Mercury slowly creeps around its girth, pushed into shadow by thermally expanding tracks. The soupy thick atmosphere of Titan has been slurped away by a nitrogen-thirsty Mars, and Saturn’s moon Dione has been moved to hydrate a newly sunshaded Venus. Hollowed-out asteroids, called terrariums, preserve and provide every imaginable and genetically possible habitat and creature.

Unfortunately, while “spacers” cruise the system in exotic wonderlands, billions suffer in poverty on an overcrowded, greenhouse-warmed Earth with New York streets turned into Venice-like canals and Florida completely underwater.

A small group led by a woman on Mercury has developed a plan to deal with the problems on Earth and the various factions in space who benefit from exploiting others. To keep the plan secret from those who would oppose it, the group does all their business in person and offline. This is extremely difficult considering that all space infrastructure and communications are controlled by AI computers called qubes.

The book opens just after the death of the leader of the group. Her grieving granddaughter, Swan, discovers that her implanted qube contains a message that she must deliver to a member in the outer Solar System without knowing its contents. She is accompanied by Wahram, another group member, from Titan. Soon after the message is delivered and the two are back on Mercury, the dome there is attacked. Swan and Wahram then travel throughout the Solar System collecting disparate clues and experiences that gradually reveal the plan for Earth and explain why Mercury was targeted.

But as a reader, I almost didn’t find out what happened. I put the book down in frustration several times, impatient for action or for real progress in the characters’ search for answers. Each time, I was irresistibly drawn back to the future where Wahram whistled Beethoven, and Swan argued about privacy with her implanted AI. After several stops and starts, I realized that this book was not about the characters or their investigation. It was about experiencing everyday life in a fully functioning spacefaring civilization.

Once I realized this, Swan and Wahram’s visits to other worlds and environments became a sort of literary webcam. And wow, Robinson really delivers on the ultimate Solar System tour package! I loved browsing the outdoor art on Mercury and poking around the radiation-proof lab on Io. I enjoyed exploring the terra-sculpting of Venus, a project even more ambitious than the Three Gorges Dam. I wondered, though, would it really be possible to surf the rings of Saturn?

Between the chapters, Robinson provides “extracts” from a sort of future Wikipedia that offers intriguing commentary on the origins of this civilization. Topics from longevity to gender are addressed in sentence fragments that immerse the reader in the culture of an ever-present and overwhelming flood of information that eclipses and perhaps replaces meaning and understanding. Why is gender relevant to child rearing? Is living longer necessarily better? Is a body required in order to have feelings?

Many space enthusiasts have imagined parts of the future that Robinson has constructed, but I dare say that no one has ever fleshed it out so completely, nor have they so meticulously and believably made it REAL. He is a master at world-building and goes way beyond the simple extrapolations of Star Trek or Star Wars universes with their humanoid aliens. What waits for us in 2312 is truly alien and totally human at the same time.

Imagine being able to choose your gravity, your habitat, your sex, and your occupation—and then swap them for something entirely different over the course of a 200-year lifespan. Swan and Wahram do this. They were architects, artists, administrators, parents, and politicians, to name a few. Who and what would you be? Where and how would you live, work, and interact with others in a spacefaring civilization?

Robinson has given us a great gift, a well-researched vision of what “people living and working in thriving communities beyond the Earth, and the use of the vast resources of space for the dramatic betterment of humanity” can really mean. He’s also wrapped that vision with a thick compendium of ideas to ponder and discuss. I recommend that philosophers and engineers alike read and study this book to extract and formulate plans for how we can work together to settle the Solar System without leaving anyone behind, even if it means lions and tigers and bears falling from the sky.