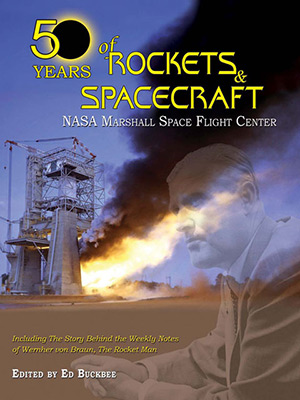 This attractive, well-illustrated, and professionally edited book by Ed Buckbee should attract an audience beyond those of us who had the honor of working at the NASA-George C. Marshall Space Flight Center. For members of the National Space Society, the linkage is profound: the founding president of the precursor National Space Institute and the founding director of NASA-Marshall are one and the same: the late Wernher von Braun. Well beyond the NSS community, historians and space aficionados alike will find much to savor in 50 Years of Rockets & Spacecraft.

If you look at the inside front cover and opposing page of this book, you will find a fascinating chronology of the Marshall Center from 1957 to 2009 in parallel to that of the local Huntsville community. There then follows Ed Buckbee’s introduction and a series of letters from the current Marshall director Robert M. Lightfoot, the president of the Marshall Retirees Association Jim Splawn, Congressman Bud Cramer, Senators Richard Shelby and Jeff Sessions, and a letter written back in May 1970 by the late Ernst Stuhlinger (then associate director for science) to Sister Mary Jucunda who was a nun working with children in Zambia. In it, he elegantly explained how society could justifiably spend billions on space exploration when people were starving in many parts of the world. That letter has become a classic.

A 20-page array of color photographs follows, depicting major events in the history of the Marshall Center plus a set of organizational charts, one showing the initial management structure back in 1960 with black-and-white photographs of each supervisory individual.

We move on to several chapters entitled “The Early Years,” “The Saturn Program,” “Post Apollo and Skylab: 1970-75,” “Science in Space,” “The Space Shuttle,” “Spacelab,” “Into the ’90s…and Beyond,” “Ares Projects,” and “A New Age of Exploration.” This is the scientific-technological core of the book, a must-read for space historians in our country and abroad.

A chapter entitled “In Memoriam” consists of short essays on leading figures associated with the von Braun rocket team who are no longer with us. Then, the book highlights short biographies of all Marshall directors from von Braun (1960-1970) to Robert M. Lightfoot, Jr. who followed David A. King in March 2009.

A fine tribute to Wernher von Braun written by Ernst Stuhlinger opens a new section of the book that continues with a year-by-year illustrated history of the von Braun era from 1951 to 1970. The von Braun team had arrived from Fort Bliss, Texas and White Sands, New Mexico during 1950 where, for the next ten years, they would work as civilian employees of the U.S. Army Ordnance Corps on Redstone Arsenal. The first American artificial satellite, Explorer 1, was orbited by the team working under the aegis of the Army Ballistic Missile Agency.

Ed Buckbee has put together a delightful and often humorous reproduction of the von Braun team’s weekly “Notes” with an insightful introduction. We learn that the deadline for each note (in replicate) to von Braun was 11:30 a.m. each Monday. Jerry McCall, von Braun’s assistant, emphasized to those on the distribution list that “…late notes will not be accepted.” Moreover, “…a ‘negative’ note is required if no information is to be presented.” Ed Buckbee writes that “After reading nearly 10,000 documents – eight years of von Braun’s career – there is no question that he was the leader of the Marshall Team, forever mentor, mediator, and decision-maker. His leadership was never questioned.”

Now it’s time for some stories from the insiders – members of the von Braun team at Marshall. Ed Buckbee’s own “Moonlight Requisition of the Saturn V” is wonderful. It regales the transferring of a Saturn V from government property to the new Alabama Space & Rocket Center for display. By then, Buckbee was serving as the first director. There being no formal approval for such a move, von Braun and Buckbee decided that it was to be considered a training exercise: the transport of a major rocket system from one site to another. According to Buckbee, von Braun reasoned that “it is much easier to ask for forgiveness than request permission” from NASA headquarters. Elements from unflown Saturn Vs had to be scrounged from many places around the country. Once assembled at Marshall, on June 27, 1969 the Saturn V stages and Apollo command and service modules “were moved the five mile trek [to the Alabama Space & Rocket Center] within a day…the largest move of space hardware in the history of NASA.” Today, the completely restored Saturn V-500 D/F rests in the Davidson Center for Space Exploration.

Ed Buckbee’s ambitious volume winds up with a roster of Marshall retirees, an index and, adorning the endpapers, the Apollo mission emblems surrounding a photograph of the lunar module and lunar roving vehicle with Apollo 15 astronaut Jim Irwin saluting the American flag.

After reading this handsome volume, instead of placing it in my bookshelf, I laid it down on the living room coffee table. There it remains, ready at any time for browsing and reminiscing. 50 Years of Rockets & Spacecraft has become a friend.