Book Review: A Passion for Mars 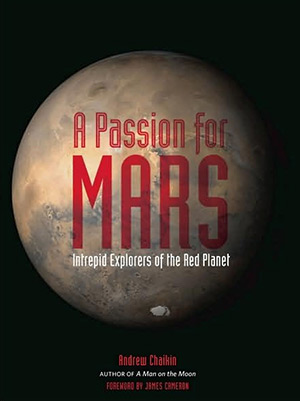 In his landmark book A Man on the Moon, writer Andrew Chaikin used his considerable journalistic skills to give us the definitive look at the Apollo lunar voyages of the late 1960s and early 1970s.

Yet there was another book that Chaikin had spent the better part of his life preparing to write — one that struck “very close to home,” while its subject remained millions of miles away. Chaikin’s new book, A Passion for Mars (Abrams), is a decidedly personal account of the mysterious Red Planet that has fascinated humankind throughout history.

His interest in Mars already stoked from childhood books, Chaikin had the good fortune of attending Brown University in Providence, Rhode Island, at the same time the university’s planetary geologist Thomas Mutch was heading up the imaging team for NASA’s Viking landers in 1976. Chaikin was chosen as an intern on Mutch’s team at the Jet Propulsion Laboratory as Vikings 1 and 2 landed on Mars. Those two spacecraft, as we know, practically rewrote what scientists had previously known about the planet.

In A Passion for Mars, Chaikin revisits those adventurous days in the summer of 1976, but also goes far beyond them, even examining the influence that artists like Chesley Bonestell had in creating such an obsession with all things Martian. “For the generation of artists who might be called Bonestell’s children, the fact that some of the details in his paintings — for example, jagged lunar mountains and blue Martian skies turned out to be wrong — did nothing to diminish their power,” writes Chaikin.

Chaikin does an outstanding job of recounting the history of the spacecraft exploration of Mars, from the Mariner flights through the highly successful current missions with the twin rovers Spirit and Opportunity. But perhaps the most insightful chapter in this book is one devoted to the late NASA Administrator Thomas Paine’s bold dream of following up the Apollo Moon landings with a manned mission to Mars.

Even as Paine and President Richard Nixon waited together on the USS Hornet for the splashdown of the Apollo 11 crew on July 24, 1969, Paine was hoping for funding for a Mars mission. But it was not to be, as Paine and others would find out later when Nixon slashed NASA’s funding.

Chaikin describes the moment Nixon greeted Neil Armstrong, Buzz Aldrin, and Mike Collins soon after they appeared in the window of a quarantine trailer on the Hornet. “Seeing him (Nixon) at this moment, hearing his familiar cadence, it was hard to imagine a more contradictory human being, someone who craved the spotlight, yet seemed uncomfortable in it,” writes Chaikin. “And strange, too, was what he didn’t say. Americans had walked on the Moon only because eight years earlier another president, John F. Kennedy, had declared that they should do so before the end of the decade. But it was Nixon’s name, not Kennedy’s, on the plaque the astronauts had left behind on the Moon. The political rewards of the Moon program were his, and he wasn’t about to share them. In his lunar phone call Nixon hadn’t even referred to his slain predecessor, and he didn’t mention Kennedy now.”

The chapter dealing with Paine and Nixon, called “Flight Plan” in the book, underscores a basic fact about Chaikin. He is thorough in his research, and always does an excellent job in relating current spaceflight progress to past history. I called Chaikin at his home in Vermont shortly before publication of A Passion For Mars to ask him about the book:

Ad Astra: Andy, you had a role in the Viking missions as an intern. But when did your fascination with Mars begin?

Chaikin: It really goes back to when I was five years old, looking at picture books about the planet. I was really hooked on astronomy and the planets. lllustrations in those picture books were like magic portals. I felt transported into space. There was something about Mars that hooked me. The distance, the loneliness of Mars, the mystery of it. I didn’t know when I was five that countless people had fallen under this spell. It was the same spell that had been cast over generations.

Ad Astra: You not only worked in the Viking program, but you also had a chance to meet artist Chesley Bonestell, whose work appears in this book. How was that?

Chaikin: It was one of the most special encounters I’ve ever had in my life. He really is so much the reason for the dream of spaceflight and the dream of space exploration taking hold in this country. His paintings, I think, were one of the key ingredients that made the Space Age possible. One of the things he did was allow us to pre-visualize the reality before it became reality. He made it seem doable.

Ad Astra: Your chapter on Thomas Paine and Richard Nixon is extraordinary. And as you write, Paine was bent on getting to Mars, but of course it didn’t happen.

Chaikin: I was grateful to have known Tom Paine. He was an incurable optimist. I even asked him whether he felt he had been naive (in seeking funding for Mars). He said, “No I didn’t think I was naive. I was trying to show Nixon that we could go in this direction, this direction of greatness.” But if anything, he felt the mood of the country shifting in a pessimistic direction, which he couldn’t go against.

Ad Astra: Personally, how does this book compare to A Man on the Moon?

Chaikin: I have to say that even though I’m best known for writing about the Apollo missions, and certainly that story is dear to my heart, Mars is a thread that runs through my life in an even deeper way … There is a feeling of Mars as being a way station on our way to stars, much more so even than the Moon. There is this feeling that going to Mars truly is like cutting the cord with our home planet. That is a very compelling story to me. We’ve learned a tremendous amount from the Mars experience.

Ad Astra: What will it be like when we finally send humans to Mars?

Chaikin: It’s going to be absolutely momentous. It will be different from Apollo. We remember the crude black-and-white TV pictures coming to us from the Sea of Tranquility. Almost dream-like. But when people go to Mars, for all we know, there will be 3-D, high-definition video coming from the surface. It’s hard to imagine what that experience will be like for those back on Earth sharing the adventure through the technology of the time. People on Mars will see Earth as a bright blue star in the heavens. And all of us on Earth will look at Mars as that glowing red dot in the sky and will be able to say, that is humanity’s furthest outpost. The impact of that will be tremendous.