Book Review: A Passion for Space 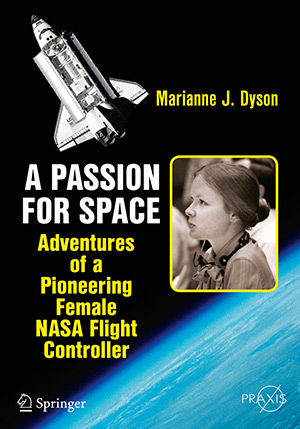 What was it like to be one of the first women working in NASA’s Mission Control in the early days of the space shuttle? How did one get there? Why did she try? Why did she quit? How did she feel when friends died going to or coming from space?

Marianne J. Dyson, an award-winning author of children’s science books and tech-savvy science fiction stories, answers these and other questions in this very personal book. Yes, the NASA acronyms are plentiful, but there are four pages of de-mystifying definitions as well as an extensive index. The personal stories—her own and others’—are the heart of the book, with plenty of pictures and a few diagrams to make it all come alive.

At the age of eleven, Marianne Jakmides came home one day in Canton, Ohio, to find that her mother had moved out, and she and her brothers would stay with her father. The “women’s work” fell to Marianne until her father remarried; most of the cleaning remained hers after that. Despite the work load, she was a stellar student who found her role models in Heinlein’s young-adult novels and Star Trek’s Lt. Uhura. She took high school science courses, studied astronomy, and found dark skies from a cemetery hilltop where she watched the stars and dreamed of flying among them. NASA wasn’t hiring women for the space race, but if they ever did, she’d be ready.

The book is frank about the struggles the author faced in paying for college, her inadequate high school preparation in both study habits and subject matter, and her personal and religious life. She also writes thankfully of the professors who helped her rearrange her classes and catch up on prerequisites. Her first college physics course “…taught me about a world of light and heat and sound I hadn’t noticed before. The leaf falling off the tree was slowed by air pressure…. Unfortunately, like calculus the year before, I got a C in that first physics course.” One professor realized that she had never done the physical manipulation activities most men grow up with—shop, car repair, construction toys, and so forth. The book describes his insightful solution, which helped her achieve high grades in later classes. In spite of these setbacks, Marianne’s determination and joie de vivre shine through. Who else, while playing guitar for tips to help prepare for an astronomy career, would take time to build a banjo?

Although she never became an astronomer, Marianne’s path to a career at NASA led through several interesting byways. Then the political climate shifted to stress hiring professional females, just as she was ready for work in the space shuttle program. At NASA she made friends, met and married “Thor” Dyson, and learned much. “We were all students and also teachers,” she wrote, because shuttle procedures were significantly different from those of the Apollo era.

Soon Marianne was working in Mission Control: in front of the giant screens we all saw on TV during simulations, but behind the scenes during actual missions. In those days, tourists could go almost anywhere between missions, and could see the mission control room from behind glass panels. To one coworker’s dismay, “I wanted to wave and smile [at the tourists], not for ‘look at me’ but for them to see we are happy doing this stuff and that scientists aren’t all serious-faced bores! Phooey on professionalism. I want to have a good time and show the public it’s fun to work for NASA.”

As career and marriage progressed, Marianne found that motherhood and NASA were a difficult combination. Examining her options and personal viewpoints in 1984, she reached a decision:

“It’s not socially acceptable to work because you need recognition for heaven’s sake! Or work because you need stimulation. No, we work because we have to pay the bills of course, and we’re truly sorry our children are being raised by someone else. Not me! I’m going to face it and try to sort it out the way it really is. Maybe I’ll write a book.”

Rather than settle for only one income and give up her dream of space, she chose flexible work as a public speaker, writer, technical consultant, and volunteer with the National Space Society (where she has served on the board of directors) and community groups. Attractive, energetic, and multifaceted, she continues inspiring others to choose scientific careers.