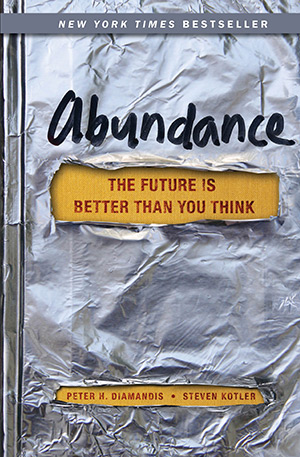 There’s a reason apocalypse entertainment is so popular these days. The world feels like we are on the edge of something. The volume of global problems and bad news appears to be growing, and it is easy to dismiss good news as wishful thinking. Fortunately, authors Peter Diamandis and Steve Kotler expertly deconstruct this alarmist landscape and methodically make their case for a positive future in Abundance: The Future is Better Than You Think. But the book’s purpose is not just to make us feel better; it’s a map of possibility and a call to action to make global abundance a reality.

The authors of Abundance take care to define their purpose of writing the book and dispel naysayers. They write, “Abundance is not about providing everyone on this planet with a life of luxury — rather it’s about providing all with a life of possibility. To be able to live such a life requires having the basics covered and then some.” The hope is to create “a world where everyone’s days are spent dreaming and doing, not scrapping and scraping.” They assert we have reached the point where we must view humanity in an integrated world system to achieve global abundance. A healthy, productive human population overall is key to seeing the book’s ideas come to fruition, and the authors masterfully synthesize data on how nine billion people can live a life of abundance within 25 years.

The early chapters work to dismiss the accepted notion that resources are finite and the only solution is to control population and increase efficiency. Using the example of aluminum, Abundance proposes that scarcity is merely a matter of access. Aluminum is the most plentiful element on Earth, but it was unattainable until electrolysis freed it for widespread use. Now, faced with peak oil and lack of access to clean water for many, developing solar and desalination technology is a tangible path forward. “Technology is a resource-liberating force,” said Diamandis at his recent TED talk. One hundred and seventy-four petawatts of solar energy hits our planet each year and half reaches the surface, 5,000 times more than what we need. Our planet is mostly salt water, and we can access only a fractional percent of the fresh water. Efficient desalination technology already exists, so the vast resource of the oceans is within reach. The authors are convinced on several fronts that a positive Star Trek-like future is possible and make a convincing argument.

The authors posit that we’re in a “hole we can’t dig out of” because of the evolution of our brains and the market forces of the news industry. As a matter of evolutionary survival, humans are programmed to notice bad news acutely, and journalists disproportionately cover bad news to get people’s attention. Our brains are also designed to compute linear and local data. Now, as faster computers build exponentially faster computers according to Moore’s law, it’s overwhelming for our minds to comprehend. Eric Schmidt of Google notes that it took all of human history through 2003 to create five exabytes of data. In 2013, we will produce that in 10 minutes. He says, “It’s no wonder we’re exhausted.” We can grasp how we sent 12 men to the Moon with slide rules and the computing power of a modern dishwasher, but the exponential nature of technological advancement is increasingly beyond our unassisted abilities. However, this relentless doubling of our computing power every two years is key to the bright future imagined in the book. The future imagined by Abundance is in many ways a clarification of Ray Kurzweil’s “Singularity” — when computing may become so powerful that man and machine will combine to great effect.

Peter Diamandis is a fitting tour guide for the ideas presented in this book. Faced with the uncertain future of spaceflight, Diamandis founded the X PRIZE that launched the private space travel industry. He says the X PRIZE’s success proves that innovation on a grand scale is by no means a function only for big government. The just-announced Qualcomm Tricorder X PRIZE hopes to help deliver quality health care to every corner of the world with a handheld device. The final key to abundance is enabling a healthy, educated, and connected humankind, to stabilize population growth and activate the networked intelligence of three billion minds we’ve never heard from before.

Abundance contains 100 pages of data and footnotes to support its hypothesis and shows progress steadily marches on despite war and depression. The authors encourage readers to join the online AbundanceHub and to participate in the effort to make the vision of Abundance a reality in the next 25 years. Diamandis and Kotler’s presentation of knowledge, data, and ideas from ancient times to our technology-driven future is a page-turner and sometimes feels like reading classic Carl Sagan. It’s hard to put the book down feeling cynical after taking the journey through our pale blue dot’s history and well-informed possibility for our future.