Book Review: Across the Universe Trilogy 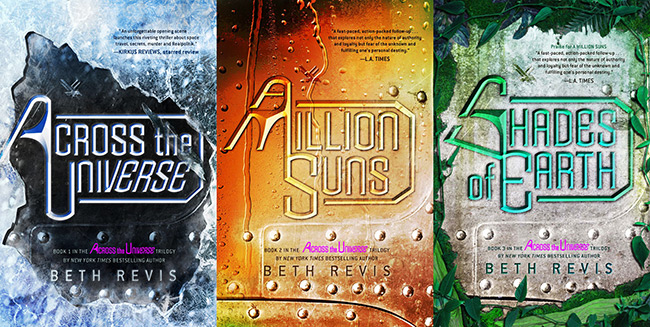 Sometime toward the end of this century, a group of investors has decided to send the first generation starship to an exosolar planet. The destination is Centauri-Earth, and the trip is to take 300 years. One hundred carefully selected colonists are frozen for the journey while thousands of others live out their lives, generation after generation, as members of the crew.

The story begins with Amy, a 17-year-old redheaded girl who is the only teen among the frozen, a perk granted to her scientist mother and military father who have skills considered essential to the survival of the colony. She witnesses her parents’ freezing and then she joins them in a nightmarish dream state that ends with her unscheduled thawing, and near drowning, inside her glass coffin.

Elder, a 16-year-old dark-haired, dark-skinned boy, born on Godspeed and destined to become the leader of the thousands of mono-ethnic “shipborns,” is captivated by the unusual Amy. But Eldest, the current leader, warns that Amy’s differences will only bring trouble. When other “frozens” are murdered, and Elder discovers Eldest has been keeping secrets from him, he and Amy join forces to find the murderer and uncover the truth about the ship’s progress toward Centauri-Earth.

Space enthusiasts will appreciate the starship setting, but they are sure to be disappointed at the “Star Trek” physics used in the design and operation of Godspeed. At first, the fact that the ship isn’t based on known designs (such as O’Neill cylinders that would work just fine without the need for “magical” gravity replicators) is mostly in the background and can be ignored. But as the story moves into book two (A Million Suns) and especially book three (Shades of Earth) of the series, technology plays an increasingly important part in the plot.

Unfortunately, having a ship “stop dead” in space is impossible, and suggesting that engineers in charge of the ship’s operation wouldn’t know where they are is ridiculous. Instant communications over light years of distance can be forgiven as a standard science fiction convention, but having people dependent on bio-implanted wi-fi not being able to communicate over planetary distances is inconsistent, if not just dumb. And why freeze only 100 humans and keep thousands awake needlessly consuming resources to perform manual labor that should be done by robots? All this techno-nonsense detracts from an otherwise good yarn.

But it is a good yarn. And the series is worth reading because it focuses on people with a vision for the future dealing with their different viewpoints and priorities to make life better for everyone—in other words, working to create a positive future. What’s important about the setting of a generation starship is not how it works, but how the limits it imposes on a society can cause it to stagnate and spiral into destruction. This setting is perhaps a metaphor or a microcosm for a modern-day world whose political and business leaders seem more interested in maintaining power than solving problems to create a better future for their people.

Like young people in every generation, Amy and Elder embody that perfect mix of naivety and vision that sees through the rhetoric, gets to the truth, and asks the hard questions. Are people better off staying safe on the world they know (Earth or Godspeed) or venturing to an unknown world that is full of risk as well as promise? Do people really want to know the truth, even if it deprives them of the hope of ever reaching their goal? How much control should people entrust to their leaders?

As we look forward to sending our first pioneers out to settle the solar system, these are important issues to be addressed and discussed, especially by the young adults who will be responsible for making these decisions in the future.

The series is recommended for ages 14 and up for good reason. Each book has intense emotional content including sexual assault, suicide, and murder—and the body count goes up with each book. Most of the events are integral to the plot-and add depth and realism to the motivation of the main characters. However, parents considering this series for younger/sensitive readers may want to read the books first, or just buy the series for themselves in the first place.

Across the Universe is a New York Times bestselling series that young adult and young-at-heart space enthusiasts will enjoy for the psychological and sociological themes involved in sending humans to colonize another world.