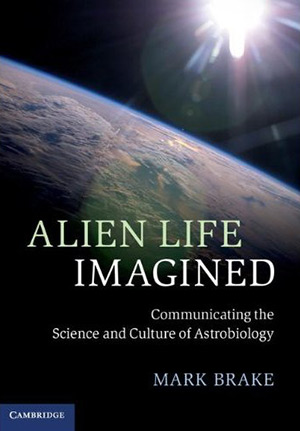 Is the planet Earth the only celestial object to sustain life? Is there life out in the cosmos? What will this alien life look like? How will humans interact with it? These are questions that scientists, philosophers, inventors, writers and the like have pondered and debated since man first looked to the skies and saw the glowing pinpoints of light arrayed before him. At present, we have sent probes and spacecraft as well as directing earthbound and orbiting telescopes to answer these questions.

The author, Mark Brake, now a freelance academic, previously created the first program in astrobiology at the undergraduate level. For this book, he has done extensive research to find and identify references to alien life from the ancient world up to the present. His sources include: scientific papers, academic works, church documents, and also science fiction writings and movies. It is a fascinating study of how the theories have shifted from Earth centric to pluralist (many worlds) beliefs in whom or what inhabits our region of space. To enhance his presentation, the author has included charts and pictures, plus extensive notes and a thorough bibliography for further study.

The author begins his journey in ancient Greece and the city states of the Mediterranean basin that gave rise to thoughts about Earth and the heavens above. He divides the Greek thinkers into two camps: 1) the Sophists like Plato and Aristotle and their Earth-centric view of the universe, and 2) the Atomists or pluralists who believed that multiple species inhabit the cosmos. The Sophists were dominant; it was Plato’s ideas of science that remained prevalent for centuries. His belief in Earth as the center of the universe was also accepted by the church of the early Middle Ages as it was used to corroborate the notion that the Christian deity wouldn’t have created other worlds since he created a perfect Earth. Conversely, there were others influenced by the authors of the Islamic world who were more scientific than religious.

Lucian, an Assyrian of the same time period as the Sophists, wrote the first science fiction story, called “A True Story.” The work was a story of space travel and alien encounters that predates by centuries the science fiction that became prevalent in the Victorian Era. Others, like Giordano Bruno, a contemporary of Copernicus living in Naples, was burned at the stake for supporting his belief in the existence of aliens! Galileo, Kepler, and Newton were men of science as well as “creatures of the culture in which they swam” (p. 90), who also had visions of aliens. They wrote stories that were timeless tales worthy of science fiction writers of today. Both Kepler’s “Somnium” and Galileo’s “Starry Messenger” investigated the wonders of space travel and alien contact. Newton, whose worldview was described in his Mathematical Principles of Natural Philosophy, was one of the most influential of scientists and writers of all time and instrumental in describing the universe in ways that were accepted for centuries.

As the centuries evolved, so did the writings of famous authors. Both Jonathan Swift and Voltaire wrote about aliens visiting Earth. Scientific tools, promoted by newspapers and scientific journals, also aided in envisioning other worlds. The telescope and microscope gave writers the tools to see the larger universe as well as the smallest and changed how we view ourselves and likewise view alien life. New sciences like geology and biology assisted in understanding Earth and its inhabitants. Writers and researchers such as Darwin and Huxley who believed in evolution and the survival of the fittest on Earth helped use scientific thought and discoveries to depict other worlds and their inhabitants.

While scientific thought and theories advanced in the 19th and 20th centuries, so did the view of the alien. Verne’s Journey to the Center of the Earth explored the interior of the Earth while the aliens were coming to Earth to conquer, as in HG Wells’ War of the Worlds. These aliens were the “first menace from space” (p. 199). Wells’ portrayal of the grotesque and anti-human alien set the norm for most of the aliens depicted in literature and movies going forward.

By the early 20th century, as rocket science and aerospace technologies grew, alien stories were here to stay. But the pendulum had shifted. Alien depictions both of flesh and blood and of machine, for the most part, remained an anathema to humans. However, new beliefs began to emerge that introduced us to the benevolent aliens of Close Encounters of The Third Kind. Science has matched these different depictions. SETI is looking for alien contact while the spacefaring countries are sending spacecraft to search for evidence of alien life in order to answer the age-old question of human uniqueness in the cosmos.

I thoroughly recommend this book. It provides a fascinating journey through human thought and science from ancient times to the present via the written word and newer mediums like television and the movies. The author has done his research to present the information in a readily understood and informative manner.