Book Review: Almost Heaven – The Story of Women in Space 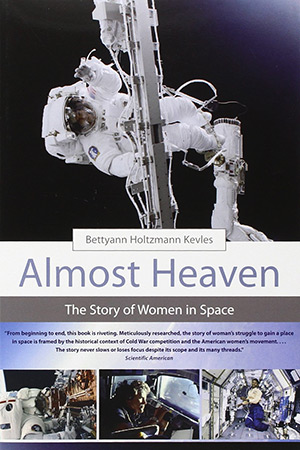 Almost Heaven is the fascinating story of the women astronauts and cosmonauts who flew, or almost flew, into space. As such, the book provides a unique perspective on the history of the American and Russian space programs.

The author’s interpretation and description of events in the context of the changing roles of women in the 1970s mirrored my own experiences dealing with the male-dominated and military-style culture of NASA and especially flight operations where I worked from 1979 to 1985.

Yet though I worked alongside the first group of women astronauts, this book contained details of their experiences that I had not known before. I rolled my eyes at the description of NASA agonizing over separate toilet facilities and how to handle supplying women with appropriately sized (versus small/medium/large) underwear and bras.

Somewhat sadly, I was reminded of the attitudes of some of the men who resented and resisted the Agency’s inclusion of women in technical positions that they felt were their exclusive domain. I appreciated how the author showed that women did not all react the same way to the various types of discrimination. For example, she explained how some of the women resented being called women astronauts instead of just plain astronauts, while others embraced the distinction. Yet all of them responded to being trailblazers and role models by putting forth their best professional efforts so that the women who followed would be treated with respect.

The stories of the women cosmonauts and international astronauts from Japan, Canada, and other countries, paralleled those of their counterparts in the U.S. and have largely gone untold. Most working women will recognize a part of themselves in the determination of Svetlana Savitskaia (first woman to do a spacewalk) to prove that Russian women were as capable as men in performance of their duties, and in the difficult choice of career versus family that caused Canadian Roberta Bondar to forego marriage and children. Bonnie Dunbar’s and Shannon Lucid’s experiences in Russia also revealed the role of personality and expectations on personal relationships between men and women of different cultures.

One of my favorite parts of the book was learning how the first women pilot astronauts (Eileen Collins, Pam Melroy, Susan Still Kilrain) handled being the first women test pilots prior to joining the astronaut corps. I had not previously considered the difference in command structures between the Navy and Air Force – with the Navy granting their commanders more autonomy because of long tours at sea versus the other services having to always run decisions up a chain of command. I also appreciated the insights into how these women used consensus management to effectively lead crews that included strong-willed men.

Although the book is meticulously researched and includes an impressive bibliography, some typos and scientific misconceptions snuck in. In several places, the wrong year is given for the first shuttle flight despite the actual date of April 12, 1981 being listed correctly elsewhere. In a description of Johnson Space Center, I-45 is instead called I-10. Adding to common scientific misconceptions was a reference to the dark side of the Moon and multiple references to no gravity in space – an error which I blame on NASA’s continual use of the term “zero-g” instead of the more technically correct “freefall.”

Almost Heaven is an important book that I highly recommend to anyone interested in exploring how people can overcome cultural and sexual biases as we move towards the long-term human settlement of space by men and women of different races, nationalities, faiths, abilities, and sensibilities from around the globe.