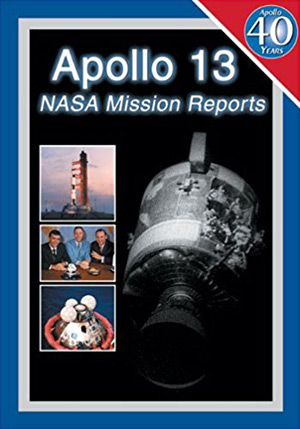 The subject book entitled Apollo 13: NASA Mission Reports: 40th Anniversary Edition is another in the series of NASA Mission Reports published for many of the human spaceflight missions. This book was published in April, 2010 to commemorate the 40th anniversary of the Apollo 13 accident, an explosion in the Service Module that caused the loss of oxygen and resulted in the heroic effort of those on the ground working with the crew of Jim Lovell, Fred Haise and Jack Swigert to bring them home safely.

Robert Godwin has compiled numerous black and white photos and illustrations, tables, charts and maps all interspersed throughout the narrative to support the facts. In addition, there is a bonus CD containing footage from post mission briefings, interviews with the crew, television segments filmed on board the craft and a short movie entitled “Houston We’ve Got a Problem.”

The book is divided into segments dedicated to: 1) pre-mission information including press kits and mission objectives; 2) post launch operations; 3) actual debriefing discussions between the crew and Mission Control representatives and 4) investigations, hearings and conclusions about the accident.

While the book is replete with hardware and equipment specification, minute by minute coverage of the mission prior to launch, it is not a book that someone would read for pleasure. Instead, it is a good source book to find in-depth data about all aspects of the craft, crew and mission. The Technical Crew Debriefing, held shortly after the crew was returned safely to Earth, was interesting in that they were queried about all aspects of their mission and how their training enabled them to work through the mission prior to and after the accident occurred.

The accident hearings and the subsequent findings provide the reader with an insight into the slow process necessary to learn the facts about the accident, uncover the reasons, and suggest changes to prevent the accident from re-occurring. The Apollo 13 Review Board, chaired by Edgar H. Cortright, also strove to pinpoint the causes and lay the proper blame. The explosion that occurred at almost 56 hours into the mission was caused by a faulty tank that had been problematic throughout its history, from its design, including the material used to cover the tank, through testing by the manufacturer, the dropping of the tank, shipment to NASA and additional testing by NASA, where components of the tank failed to test as specified. At each level, improper due diligence and outright disregard for proper procedures exacerbated the problem. Interestingly, the Board freely admitted that had the faulty tank been taken out of service at the first sign of defect, Apollo 13 might have been able to fulfill its mission objectives, including landing on the Moon in the Fra Mauro uplands.

Members of the National Space Society will find this book interesting in the detail provided on all aspects of the mission, the accident, and subsequent investigation. The reviewer did check NASA sources to confirm the data, and found that the findings of the review board were correct as presented in the book. It was also interesting to find that the Review Board compared processes from this accident with those that occurred on Apollo 1 in which three astronauts died, due in part to faulty safety procedures. While the Apollo 13 accident could have been prevented by the stringent following of proper safety procedures, it did serve as a wake up call to all involved that traveling in space is a risk and should not be taken lightly.