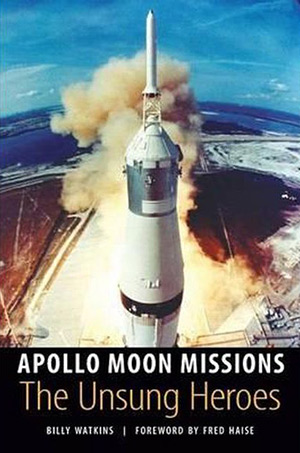 Quick — name two people who walked on the Moon.

Chances are, if you’re still with me, you’ve named Flight Directors Chris Kraft and Gene Kranz, or perhaps even Pad Leader Guenter Wendt. If you did, congratulations! The general populace would likely draw a blank on that second question (or if not, then naming Ed Harris among them).

Ready for Round Two? After Neil and Buzz, name the 12 astronauts who were launched by NASA to walk on the Moon. I’ve probably lost quite a few reader-contestants by now, but there are the diehards amongst you who are no doubt rattling off at least 10 moonwalkers: Pete Conrad, Alan Bean, Alan Shepard, Ed Mitchell, Dave Scott, Jim Irwin, John Young, Charlie Duke, Gene Cernan and Harrison Schmitt. Who were the other two? Jim Lovell and Fred Heise of Apollo 13 fame, of course.

Final question: Name 14 people pivotal to the Apollo program who were not Apollo astronauts and who also were not Kranz, Kraft or Wendt. Unless you’re a professional space historian, very well read or aspired to be included in that count yourself, you’re likely struggling on that last one. The irony, of course, is that for every astronaut you can name, there were more than 25,000 people on the ground making their flight possible. And few people can name 14!

That particular disparity struck journalist Billy Watkins as a good book topic after he interviewed just one of the moonwalkers, John Young, in 1999. Young, who rarely grants one-on-one interviews, chose Watkins. Once he answered the questions posed by the Mississippian, he challenged Watkins in return: “You know, the astronauts have been interviewed to death, but there were so many people who helped us go to the moon and bring us back, and nobody knows anything about them. You should find some of those people and write about them. They really did some incredible things.”

Six years later, Watkins’ first book confirms Young’s conviction: There were many people involved in the success of landing astronauts on the Moon who deserved the headline but, for whatever reason, escaped the public eye. In Apollo Moon Missions, The Unsung Heroes, Watkins profiles 14 people, one for every Moon-landing crewmate, and so reveals the men and women behind the men of Project Apollo. In Heroes, Armstrong and Kraft are the supporting players to such notables as Clancy Hatleberg, JoAnn Morgan and Rodney Rose.

“Who?” you may ask. You might know Hatleberg better as the frogman who recovered the Apollo 11 crew after splashdown; Morgan as the only woman in the Saturn V launch control center; and Rose as the planner who brought each of the missions together. More likely, you don’t know them at all — but you should.

Heroes is separated into four parts, loosely themed by their role in history. Watkins devotes one chapter to each person profiled, and for quite a few of the 14 he interviewed, it was their first such close attention. The outcome is stories rarely, if ever, heard — let alone put on paper.

Take for example the case of Hugh Brown, whose chapter’s subtitle blandly reads “Telemetry and Communications, Kennedy Space Center.” Besides being one of the few African Americans involved in the early space program, Brown’s claim to fame involves thwarting the presumed attempts by Soviet submarines to scramble the radio waves being passed between controllers and the spaceward Saturn V. Brown, who early in his professional life struggled to secure a loan, went on to become the chairman of the Federal Reserve Bank in Atlanta, Georgia.

And then there is Joseph Laitin. Laitin didn’t work for NASA; in fact, he didn’t work for any part of the nation’s space program. A Hollywood freelance writer turned White House press secretary serving the budget department, Laitin (along with his late wife, Christine) is nonetheless able to take credit for choosing the first words broadcast from lunar orbit. How he came to be the one to select the Old Testament’s Genesis passage reads like a game of Six Degrees of Separation, underlining how interconnected we all are on the “good Earth.”

Not all of Watkins’ subjects are complete unknowns. Astronaut Bruce McCandless was chosen for his role as Apollo 11 capsule communicator, but later went on to be the focus of one of the most famous photographs ever taken during the Space Shuttle program. Jack King’s voice is instantly recognizable to anyone who has listened to the Apollo 11 countdown, but how he came to be the “Voice of Launch Control” is likely less known. And Joan Barrett, Mrs. Stuart Roosa, emerges from her chapter as more than the “proud, happy and thrilled” wife of the late Apollo 14 lunar module pilot, but the driving force behind him becoming an astronaut.

Watkins segues each biography into the next with subtle skill, making Heroes less like a collection of disjointed stories than a portrait of the team they were. If there is only one weakness, it is that Watkins stopped at 14 profiles. After reading Apollo Moon Missions, The Unsung Heroes, you’ll realize how little we all know about those who made the small steps and giant leaps possible. As Apollo 13 lunar module pilot Fred Haise writes in his foreword, “The people profiled capture the sense of team spirit, a desire to assure success, and really bring out the human interest side of the program.” ‘Interest’ is the key word, and Waktins delivers it in Heroes in spades.