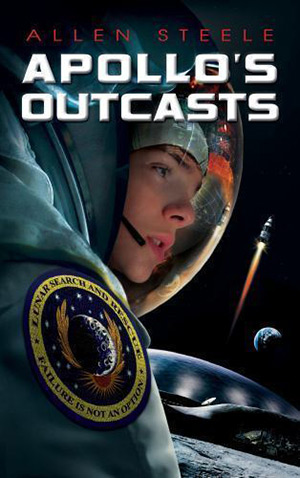 Apollo’s Outcasts is a book for young adults about living on the Moon that gets the science right and that includes an engrossing, well-crafted story.

The book begins with a family’s escape from politicians run amok in a future where most of the world’s energy comes from fusion power. The fuel for the fusion reactors is Helium 3, an isotope that is so rare on Earth that the total world supply is measured in pounds. He3 is available on the lunar surface, and in the book’s world, the United States has joined the International Space Consortium (ISC) to supply it from the Moon. The mining base, named Apollo, is on the lunar near side, in Ptolemaeus crater.

The viewpoint character is Jamey Barlowe, a 16-year-old who suffers from weak bones attributed to being born on the Moon. His mother died in an accident there when he was a baby, and his father brought him back to Earth where he is confined to a wheelchair. His two older sisters, Melissa (18) and Jan (21), were born on Earth, and are not disabled.

The father works for ISC. He and some other scientists signed a petition that marked them as enemies of the current vice president of the U.S. When the president dies, the VP issues orders to arrest all those who oppose her positions, including Jamey’s father, so she can control the production of He3. Knowing that his children will be rounded up and used to force his cooperation, the father and his fellow scientists arrange to send their six children to the Moon.

At the last minute, a mysterious girl is added to the roster and replaces Jamey’s sister Jan. The six kids, including Jamey’s best friend who is the son of another scientist, launch to the Moon in a shuttle.

The story builds logically and includes short and accurate descriptions of launch, weightlessness, lunar geography, and lots of scientifically plausible new gadgets and ways of getting around on the Moon. The Apollo lunar base is totally believable, with rationed water and farms, unique lunar sports and school taught by various local experts. Space enthusiasts will enjoy flying, going on a space “walkabout,” and getting into a space battle on the lunar surface.

As the political situation worsens on Earth, the residents of Apollo train their emergency response team called the Rangers to serve in a defensive capacity, and the kids each have important roles to play.

The story includes light romance between the teen characters. One scene near the end of the book involves the kids removing clothes in anticipation of sexual activity, but the actual activity is limited to kissing.

One especially nice character is a mentally-challenged boy who is portrayed in a realistic and positive manner. The way that the other characters treat him reveals their personalities in a clear and interesting way.

The message that lunar gravity will allow otherwise handicapped people (i.e. Jamie) to walk and play sports is a good one. However, I question attributing the main character’s disability to his mother’s pregnancy and his birth on the Moon.

Though data does show bone loss as an effect of freefall, it varies from person to person, and no one knows whether or not lunar or artificial gravity (via spinning space habitats) would be sufficient to halt this loss. The fact that exercise reduces the rate of loss, and that astronauts eventually recover after return to Earth, give hope that countermeasures and treatments for bone loss can be developed in the future.

Though authors of fiction books can certainly speculate on the effects of lunar gravity on their characters, I remain optimistic that in the future, children will be conceived and born on the Moon and travel to and from Earth without any permanent detriment to their health.

I do share the author’s speculation that the Moon’s resources will indeed be of critical economic importance in the future. How those resources could or should be shared among nations of Earth is a sticky issue that is an excellent topic for class discussions. The way it is handled in this book ties up all the loose ends of the story yet leaves open the possibility for more adventures set in this future world. I sure hope there are more because I can’t wait to get back to Apollo!