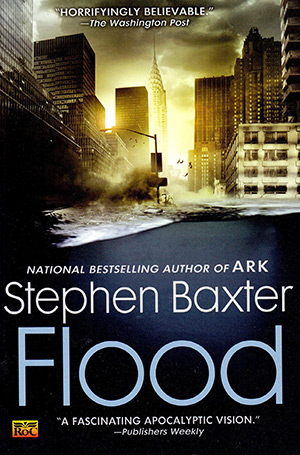 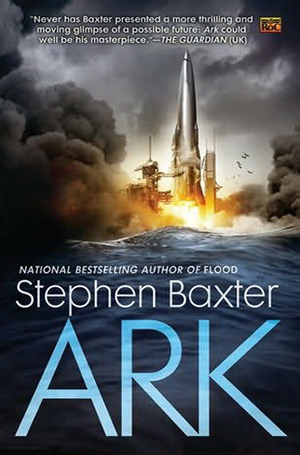 Flood and Ark are a dark two-book series about Earth experiencing an eco-disaster, resulting in the creation of different Ark technologies to save some pieces of humanity. The novels will appeal to readers who feel that a viable space program is needed as a safety precaution, as well as to those who believe that private enterprise can help when governments fail to apply the necessary vision and resources. The author, Baxter, has degrees in both math and engineering and is a Chartered Engineer and Fellow of the British Interplanetary Society. As such, he provides great technical details to the problems of engineering long term solutions, while not neglecting the social aspects of sustaining humans for many years in a hostile environment.

Flood opens in the year 2016, with the release of a set of hostages who have been held captive for four years. Once released, the hostages find that in the intervening years, the Earth has changed dramatically. The oceans have risen much more than any climate models had predicted, and storms rack the planet. The hostages’ savior and benefactor, Nathan Lammockson, is a billionaire entrepreneur. He explains that the governments of the world are unprepared for the coming disasters, and that he and others are planning on using their money to prepare survival contingencies.

Though the novel follows each of the former hostages as they are involved in multiple disasters, such as the washing away of London residents during a storm, it’s the billionaire Lammockson who provides the primary attempts at solutions. He builds a floating city. He funds an oceanographer, who discovers that the world will flood under thousands of meters of water. When the scientific community is skeptical, and the world’s governments build water barriers which are all quickly overwhelmed, Lammockson follows up by creating Project City in the Andes. The purpose of this city is to amass the people, materials, and manufacturing to create Ark Three. His fellow entrepreneurs attempt the creations of Arks One and Two.

Lammockson is not necessarily a likeable person, as he manipulates those around him, but I had to admire his planned contingencies upon contingencies, even to the point of planning what to do if an Ark failed. I thought that this was the exact type of thinking needed for any future off-world colony. However, I was a bit disappointed that by the end of Flood, the novel had not yet taken up space flight and only concerned itself with using a floating Ark on an inundated Earth.

The second novel, Ark, fulfilled those expectations; it was almost completely about the creation, launch and voyage of a spaceship Ark. The book opens at a meeting where private industry leaders discuss many of the topics familiar to Ad Astra readers, such as establishing settlements in Earth orbit, on the Moon, Mars, Europa, or in O’Neill colonies. They also discuss possible propulsion systems, such as solar sails, nuclear propulsion and/or salvaged NASA rockets. They even consider assembling a large colony ship in orbit by using the abandoned International Space Station as a staging factory. But due to the lack of a pre-existing space settlement program and time, the team goes on a surprising crash program using NASA and Air Force resources. They utilize an Orion Project launch using nuclear explosions to heave a large ship into space, and an Alcubierre “warp bubble” faster than light drive to propel 80 colonists to a planet in a nearby star system. The planet there was discovered to have a methane and oxygen atmosphere.

The author introduces readers to many potential social engineering aspects of selecting crew candidates, such as the mix of ages and religions, and the education and training required for a self-sustaining colony. The importance of the social aspects become apparent as the crew embarks on their multi-year journey. They must deal with a critical engineer going insane, infighting for control by the senior crew members, sabotage, a fire that spreads due to unforeseen maintenance issues, and children who grow up in an alien environment who then act and think very differently from their parents. The ending does have a bit of a surprise, and although it concludes the storyline, it leaves the option open for additional sequels.

A word of warning: some parts of the second novel, Ark, deal with pedophilia and sexual predation, and may make some readers uncomfortable. The issues are integral to the plot, and so are not gratuitous.

The novels are a reminder of how fragile our existence is, and how important it is to expand our ability to live and work in space using both government and private resources. As a character says at one point, “We just ran out of time. Another fifty years and we’d have had power stations in orbit, and mines on the asteroids and the moon, and we wouldn’t need damn continents.” It is a cautionary tale of what our life without space settlement could look like.