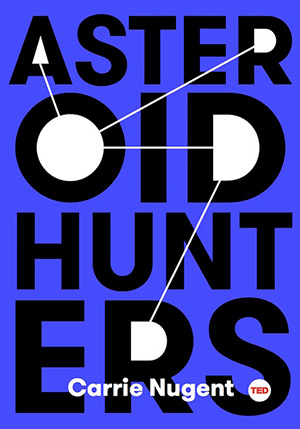 Although most—but not all—asteroids large enough to destroy humanity have been located, we know only 30 percent of those capable of destroying a medium-sized country. In this short 5×7-inch book, Dr. Carrie Nugent documents her work with the NASA NEOWISE space-based, infrared telescope to locate the “missing” 70 percent. NSS members will learn how she and others use telescopes to discover, track and categorize asteroids, as well as how the scientific community coordinates these activities. The book provides a succinct summary of asteroid hunting techniques and proposes ideas for stopping potential impactors. It would make a nice addition to a budding young scientist’s library.

The book starts with the basics by defining asteroids and comets. It clarifies that their primary home, the asteroid belt, is unlike its depiction in science fiction movies—it is not chock full of boulders that a rocket ship must zigzag through. All NASA craft have successfully cruised through the belt starting with the Pioneer 10 probe in the early 1970s. A chapter about the first known asteroid, Ceres, provides a fascinating history of its discovery and naming. But the author explains that asteroids and other rocks reside not only in the belt, but throughout the solar system. As telescope techniques improved, one astronomer even called them “those vermin of the sky.”

Many small pieces of these “vermin” enter the Earth’s atmosphere as meteors, and the author relates stories such as the only documented person ever hit by one. The meteor crashed through her roof while she was napping and only slightly injured her. Not so lucky were others hurt when the meteor over Chelyabinsk, Russia exploded and its shock wave broke windows in thousands of buildings.

As demonstrated by professional astronomers’ first learning of the Chelyabinsk meteor via a Tweet, some meteors and asteroids are discovered by amateur astronomers. Thus the author discusses the basic rules of asteroid hunting such as, “Don’t look at the Sun!” She goes on to explain why the one space-based and four ground-based telescopes searching for threatening asteroids have not found them all—many come at us from the sunward direction where we cannot point our detectors. The author also explains how we estimate the number of asteroids not yet discovered, and the second rule which is, “Share your information.” Astronomers send all observations to the Minor Planet Center in Cambridge, Massachusetts which also determines if their discoveries are new. The report of a new asteroid in 2008 stresses the Center’s importance. As astronomers, both professional and amateur, calculated that the asteroid’s orbit intersected with Earth, over 800 observations, including one from a high school in New Milford, Connecticut, poured in. This allowed NASA to predict accurately that it would hit the desert in northern Sudan and not a major city.

So how do astronomers determine whether something they spot is an asteroid? The next chapter describes in detail how they use Earth-based telescopes to take multiple exposures to form a mini-movie. Any moving points of light are potential discoveries, and on a good night an astronomer “can find five to ten new ones.” A follow up chapter describes how the NEOWISE space telescope detects asteroids via their heat-emitted infrared radiation, thus allowing detection of even very dark or dim asteroids.

The final two chapters encompass the threat of asteroid impacts and the function of the newly formed Planetary Defense Coordination Office (PDCO). Its job is to coordinate with international and U.S. government agencies (such as FEMA) on detecting threats and, as its leader explains, “figuring out what we would do if there was an asteroid on an impact trajectory.” The book closes by explaining current viable deflection strategies such as kinetic impactors, gravity tractors and the “nuclear option” as well as a few other “fantastical” ones.
.
I found the book a short read with lots of basic information. As a long-time NSS member, I was familiar with most of this, and I found the most interesting parts were the behind-the-scenes stories that made the facts come alive. This book could make an excellent present for someone new to the subject of finding and tracking asteroids and the potential threats these objects pose.