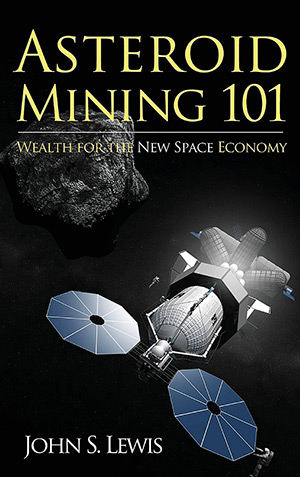 If there is anything you would like to learn about asteroids and meteorites, and how we might use asteroid resources to expand into space, this is a must-have book. This book summarizes the current state of knowledge about these objects in enough detail to satisfy even the most technically demanding space enthusiast. The material is not really a 101-level book, nor is the information in it solely applicable to asteroid mining. A key focus is on near-Earth asteroids (NEAs), providing details about their composition, chemistry, orbits, albedos, and classifications. Like miners of old, readers may need to sift the gems of information from the plethora of data. However, by the end, readers will be rewarded with a long-term plan for mining the asteroids and using their resources to expand our civilization throughout the Solar System.

The book starts with some basic Solar System astronomy. It explains that we could begin our efforts to mine asteroids by sending out small satellite prospecting missions to answer key questions about asteroid resources and asteroid threats. We currently only have detailed photographs of NEAs 500 meters and larger in diameter. Miniature deep space probes, perhaps launched in ‘arks’ that carry many at once, could be sent out to sample smaller space objects. But even before we start, there is much that we already know from Earth’s collections of meteorites, which can act as poor man’s space probes.

Readers not inclined to learn the various classifications and subtypes of meteorites, their chemical makeups, famous falls, and their possible origin in the asteroid belt, may wish to skim the next section. However, not to be missed is an important final chart which includes ‘10 Implications for Fledgling Asteroid Miners’ such as “The volatile elements needed for life support and propellant production are specific to carbonaceous chondrites” (one of the major types of meteorites). The next section, which deals with various NEA orbits and their ultimate fate, has implications for planetary defense, estimating that about 30 percent of all NEAs “will end their career by colliding with Earth.”

This sets the stage for the next chapter about the accessibility of NEAs. It details the velocity changes, or delta Vs, required for Earth-based missions to reach various locations, such as geosynchronous orbit, the Moon, Mars and the asteroid belt. About 20 percent of NEAs are easier to reach than the Moon, providing ample opportunity for early mining efforts. After attaching to an approaching object, a probe could ride it out to the asteroid belt to visit other rocks. The chapter includes propellant requirements and delta Vs for various sample return missions.

The resources in space are vast. Charts, based on information learned in the previous chapters, list the quantities available. For example, NEAs contain enough water to sustain a space population of 500 billion people, or 30 trillion if asteroid belt resources are included. Meteorites show that roughly 25 percent of the asteroid population is iron and nickel, with enough silicates and iron compounds to build habitats for a vast number of space pioneers. The author makes the case that the majority of resources would be most useful off Earth, and not returned to Earth for sale. The water could be used for propellant for probes and mining ships, as well as radiation shielding. Space-based solar power, ships, and habitats would be built from space minerals. Earth need not supply everything that we need to become a spacefaring species.

The final section deals with the mechanics of mining an asteroid, followed by an extensive appendix with photographs of meteorite types. Besides the challenges of landing on an asymmetrical rotating object, extraction of resources would look nothing like it does on Earth. The methods used on our planet are not appropriate to the geology and chemistry of the asteroids and their microgravity, so Dr. Lewis proposes the best ways to extract and refine the ores. He concludes with a list of 14 items needed for sustained asteroid mining, beginning with the use of space-derived propellants. By following these steps, we would first use the resources of NEAs, and then stepping-stone ahead to the asteroid belt. Similarly, we could subsequently move on to the Jupiter Trojan asteroids and then to the icy bodies further out. It is a grand vision, supported by many facts that will keep the reader mining the information for a long time.