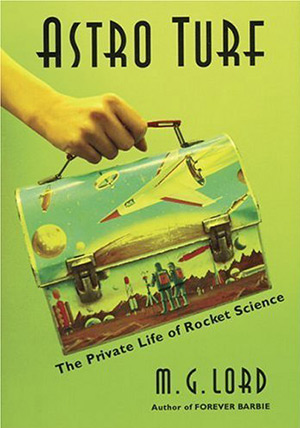 Over the past decade, M.G. Lord, a prominent cultural critic, has dissected two boomer-generation talismans: the ubiquitous Barbie doll, in Forever Barbie (Avon Books. 1994), and now that Cold War-era archetype, the rocket engineer. In her new book, Astro Turf, Lord traces the transformational trajectory of NASA’s Jet Propulsion Laboratory (JPL) from an army of white guys in white shirts and thin ties to today’s more inclusive coterie of scientists and engineers smitten with the “bug” to explore. Through an engaging mix of memoir, history and social commentary, the author launches into a journey of self-discovery as she uncovers JPL’s past and present and the changing complexion—and chromosomes—of the scientists and engineers there.

From a provocatively entertaining feminist perspective, Lord makes clear that the trail blazed to other worlds was rocky and exacted a high personal and professional toll from many. Her father. Charles Carroll Lord, who worked on the Mariner Mars 69 mission, had a personality shaped by tragedy, his times and the male-dominated engineer culture he embraced. Lord, “driven by terror,” fled to college. However, upon her return to JPL 30 years later, she finds that her father had merely “embraced the values of his profession: work over family, masculine over feminine, repression over emotion.”

Looking bock, the author paints a poignant portrait of her father, as well as a fascinating account of JPL founders Frank Malina, a quixotic and brilliant scientist of conscience driven abroad, and John Whiteside Parsons, the volatile self-taught chemist whose investigations into rocket fuel were guided by “magick” — the sex rituals of self-proclaimed Anti-Christ Aleister Crowley — rather than mathematics.

To some extent, Parsons’ part-time priapic pursuits can be seen as a more eccentric manifestation of the male-dominated culture of mid-20th century engineers, a culture that excluded women and turned them into sex objects. As late as 1970, the few women allowed into the male-dominated sanctum of JPL competed for the title of Miss Guided Missile.

To Lord, the masculine culture of science and technology reflects its late medieval beginnings when access to higher learning was monopolized by celibate, ascetic and frequently misogynistic priests. Such “virtual eunuchs were repelled and terrified by women’s biology—a horror they shared with the space-program engineers who banished menstruating women from the lab.” It wasn’t until the influx of female software engineers in the 1970s and 1980s that JPL’s hierarchical, male-oriented management structure gradually shifted to a more inclusive model.

In the “old boys club” version, homosexuals were barred from employment, even as NASA welcomed German engineers who had committed Nazi atrocities. The author recounts how Wemher von Braun (an “oily Nazi”) toured the Mittelbau Dora concentration camp to select skilled inmates for V2 rocket production. Ironically, the German engineers reaped much of the praise for developing the Jupiter rocket that launched America’s first satellite although the upper stages were designed by JPL.

Lord emphasizes such inequities, but it would be unfair to cast her work as a victim feminist screed or the author as a space-age, daddy-hating Sylvia Plath. Rather, her book is replete with the themes of transformation, duality and redemption, and an understanding of the complexity of human motivations and behavior. In fact, the tide of the book’s first chapter, “The Bride Comes to Yellow Sky,” hints at the redemptive power of transformation. Later she describes how Frank Malina, the unmarried engineer who helped found JPL, moved to Europe to avoid FBI scrutiny and became a married painter and sculptor.

However, Lord pays grudging homage to the value system of rocket engineers despite its shortcomings, and recognizes that her father — and the men like him — were at once conformist (in a conformist era) yet independent-minded. The engineer monolith was, in fact, not so monolithic, but hid a complex and Janus-like duality of conformity and independence, art and science, and “masculine” and “feminine” qualities.

The mixing of those qualities continues to fascinate. The author describes the “throbbing masculine power” of a rocket launch; a tumescent symbol penetrating the heavens. And she records the ritualized technological liturgy and benediction of the preceding countdown — a link between Western science and Christian monasticism? But at the same time, Lord recognizes the inherently veiled feminine imagery as spacecraft is “mated” to the launch vehicle via “umbilicals.” The launch itself is like “labor.”

Today, JPL is no longer an exclusively male-dominated bastion. Thirty years after the sexual revolution, the balance at JPL has shifted to some degree — Lord doesn’t say how much — to one that is more feminine, less conformist, more inclusive. And despite the fact that today’s engineers at JPL reflect a broader swath of humanity than her father’s generation, the “bug” to explore the cosmos endures.