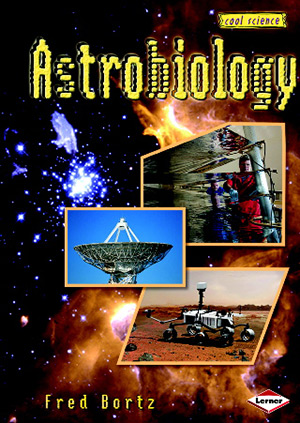 This book is part of Lerner’s “Cool Science” series, and astrobiology is certainly one of the coolest sciences! Author Fred Bortz, brings the expertise of his PhD in physics, years of teaching experience, and his skill as an award-winning writer to the topic.

Bortz first takes a look at the history of human ideas about life on other worlds. He touches on Plutarch’s thinking of the dark areas on the Moon being seas (which is how they got their names), and how Galileo’s and Herschel’s observations shaped early views of our place in the solar system. The first chapter ends with a brief discussion of Schiaparelli’s and Lowell’s fascinations with perceived artificial “canals” on Mars.

The second chapter focuses on the necessity to assume that life elsewhere is similar to life on Earth, and what evidence spacecraft have thus far provided. The discussion of what constitutes evidence of life leads naturally into the next chapter which focuses on the debate surrounding the potential signs of life scientists found in a Martian meteorite. Though information about DNA and evolution is accurate and important to the subject of astrobiology, it feels somewhat tacked on to the end of this chapter because it has no connection to the Martian meteorite. DNA is discussed again in the next chapter, also somewhat out-of-context with the other material.

Using the Goldilocks analogy, Bortz explains why Venus is too hot and Mars too cold for complex life to survive. He then discusses extremophiles and the possibility of simple life on either of those worlds and also the moons Europa, Titan, and Triton.

The final chapter examines the possibilities for life on planets in other solar systems by examining the criteria for the Drake equation. This equation is used to calculate the probability of humans ever contacting other intelligent creatures. Even though the probability is low, there are so many billions of worlds “out there” that the odds remain good that someone­perhaps one of the readers of this book–someday will discover truly alien life.

I only take issue with one statement in the text that is presented as a fact, but actually remains controversial among astrophysicists. On page 39, it says, “Without the stabilizing Moon, the pattern of Earth’s seasons would change rapidly.” The Giant Impact Theory states that our moon was formed as the result of a collision. That same collision supposedly “knocked the Earth over” and caused the axial tilt that is responsible for the seasons. So perhaps there is a correlation between large moons and planets with seasons (though Mars has seasons and no large moon). However, there is debate among planetary scientists about whether or not the Earth’s tilt has actually been stable. Some say that glaciers, like putting a weight on one side of a spinning top, drastically changed the tilt, and it used to be around 50 degrees.

All left pages have the same red and black background as the cover, and all right pages are simple black. The text is printed on white cut-outs and sidebars and captions on yellow. I suppose this is to make it look like a report printed on paper and pasted on a poster board, but the boxes broke the text in awkward places. Also, the subtitles were almost invisible in dark blue against red and black backgrounds.

Astrobiology covers the subject accurately, provides an appropriate level of background and detail, and includes plenty of resources in the back for children to build on this first introduction. The photos do a good job of illustrating the text, and the captions are clearly written and complement rather than repeat data already in the main body. Fact boxes pack more data into the short 48-page book than would otherwise be possible. I recommend Astrobiology as an informative introduction to the fascinating topic of possible life on other worlds.