Book Review: Beyond the Solar System 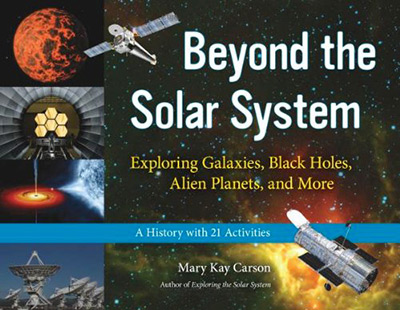 We live in an exciting time for the exploration of space as both Earth-based and orbital telescopes provide an ever expanding view of our universe. Children of all ages can explore the Internet to see extraordinary pictures of our universe provided by these increasingly sophisticated technological instruments of science and learning.

In the ancient world, scientists and thinkers postulated that Earth was the center of the universe, a notion that was carried into the Middle Ages by the clergy of the day. This belief began to change when great men of science like Galileo, Copernicus, and others developed ways to observe and track the movements of Earth and other bodies in space.

Mary Kay Carson is an author of more than twenty nonfiction children’s books covering a wide range of science and social studies subjects including space, weather, and wildlife. In 2009, she received the American Institute of Aeronautics and Astronautics’ Children’s Literature Award for her book, entitled: Exploring the Solar System.

Beyond the Solar System is more than a voyage through the universe. The book is a chronological examination of the progression and evolution of astronomical knowledge through the centuries from the ancient stargazers to plans for future orbital telescopes like the James Webb. Each chapter is devoted to a pivotal period in human exploration of the universe, highlighting the famous and not-so-famous people of the period. Before getting into the history, Carson provides a two page timeline for easy reference.

Each section contains not only colorful pictures and diagrams, but activities for the reader to help him or her better understand the subject matter. Each section also contains brief biographies of the important people, including women, of that particular time period who made contributions to astronomical knowledge. A glossary of important terms and a section that suggests sites to explore further rounds out the book.

The timeline begins with the ancient stargazers covering a period from prehistoric times up to the 1600s. Pictures explain how the ancients created myths to understand the lights that they found in the heavens. An activity in this section helps the reader find Polaris. Her explanation of Ptolemy’s epicycle system is easily understood and includes an activity to better visualize the concept. She also talks about the other thinkers of the period, including the Arabs who continued the exploration of the heavens while Europe slept through the Dark Ages.

Carson devotes an important chapter to the 1600s when so much was discovered by Galileo and his contemporaries, including Copernicus, Kepler, and Newton. The activity in this section teaches the reader how to make a telescope to enable them to experience the job of discovery first-hand.

The next section, from the 1700s through 1915, begins with a study of the work done by the Herschels, Messier, and others, covering the types of celestial objects they discovered. The discussion of variable stars and galaxies is provided in language that is clear and readily understandable by the reader. The chapter discusses the improvements in telescopes and how to measure sky distances as well as the development of the spectrum to learn what stars are made of. In the 1800s, women were involved in astronomy either with their relatives or as part of university projects. For example, Annie Cannon was instrumental in cataloguing more than 300 variable stars and five novae.

From 1900 through 1940 was a fascinating period in the field that included the construction of larger and larger telescopes to view the cosmos. These instruments introduced new objects to the world, including nebulae, island universes, and ways to view and measure them. The author also provides an explanation of redshift and discussions of the spectrum. Scientists highlighted in this section include Einstein, Eddington, Hubble, and Lemaitre.

The 1930s to 1970s are discussed next with emphasis on learning about the invisible universe, including quasars, pulsars, black holes, and the radio telescopes that aided in finding these objects. An activity in this section demonstrates principles in the formation of black holes.

The next chapter brings the reader to the present and further discusses efforts to better understand our universe by looking at other types of galaxies, exo-planets, and the dark energy that is pervasive throughout the universe. A brief history is included of tools that scientists use today, including the Hubble and Chandra orbital telescopes.

I would recommend this book to all children who have a passion for learning, not just about the night sky, but all aspects of our scientific history. The many illustrations and activities only enhance the reader’s understanding of the subject matter and enable him or her to be challenged to learn more, and hopefully one day to join the ranks of the great people documented in the book.