Book Review: Blueprint for a Battlestar 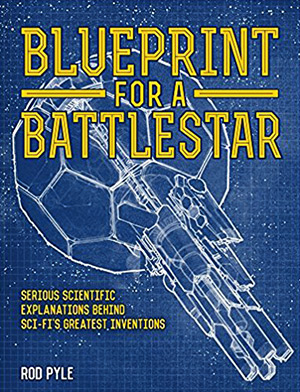 In Blueprint for a Battlestar, Rod Pyle takes us even farther than the book’s subtitle promises. He not only explains the science behind clever devices employed in science fiction, but he explains how close scientists are coming to being able to make those devices. Or at least, reasonable facsimiles of them.

The book explores a couple dozen science fiction inventions including death rays, protective forcefields, wormholes, dinosaur revival, cyborgs, invisibility cloaks, and tricorders. Pyle’s explanations are understandable for readers without detailed scientific knowledge. For example, he demystifies plasma by saying it “is simply ionized gas that is able to conduct electrical energy and get really, really hot.”

The chapter on terraforming presents the concepts clearly, explaining how it would work as well as a realistic description of how long it would take to make Mars Earthlike. Descriptions of several possible scenarios for accomplishing that feat make it sound plausible. Addressing the issue of why humans might try to settle and re-engineer the climate of another planet, Pyle writes that “One need look no further than Tunguska, Siberia or Meteor Crater, Arizona to see that there can be surprises from space. Such an asteroid impact may have caused the dinosaurs to become extinct, and another might do the same to humanity.”

One chapter looks at the technology necessary for making a tricorder like the one used by Dr. McCoy in Star Trek. Pyle discusses the Qualcomm Tricorder X-Prize competition that will award $10 million to the first developer of a device that can measure ten key metrics of disease. Competitors are working on several promising devices such as the Scanadu Scout, a “hockey-puck sized device” that, placed against the forehead, produces a readout of heart rate, blood pressure, temperature, blood oxygen level, and an EKG.

Along with the science insights, the book serves up occasional tidbits of science fiction history. In the chapter about searching for extraterrestrial life, for instance, he notes that tales of alien invasion started at least 145 years before H.G. Wells’ tale of Martian invasion, The War of the Worlds. Voltaire described a visit to Earth by two enormous creatures from Saturn and a planet of Sirius in his 1752 short story “Micromegas.” Maybe serious sci-fi fans know this sort of detail, but I was intrigued by such background information.

Not all the concepts in the book come from science fiction, though. I learned that Archimedes imagined a kind of death ray around 212 BCE. More specifically, he envisioned a series of land-based bronze mirrors that would focus sunbeams on tar-covered wooden Roman ships and set them on fire. More recently, in the 1970s, physicist Edward Teller conceived a more sophisticated death ray, an X-ray laser beam burst triggered by a contained nuclear explosion. The device was built and tested several times without much success.

While I found the book fascinating, I also found parts of it unnerving. For instance, scientists really are working on retro-engineering dinosaurs by manipulating DNA in chickens. “So far, they have managed to turn a beak into a scaly snout and have transformed feathered plumage back into a partial reptilian tail,” Pyle writes. Some of their experiments result in unforeseen changes. Describing one of them, Pyle writes, “It was a small but informative oversight, and fortunately did not result in the lab being destroyed or the devouring of any graduate students.”

I found another example I thought was a bit bizarre in the chapter on cyborgs. Pyle tells of a man who was born completely colorblind and devised an electronic compensation. “In 2004, he had an antenna surgically implanted into the back of his skull, which looks uncannily like a reading lamp for an eBook,” he writes. “The device allows him to hear, inside his brain, tones representing the colors in a given area. He can also connect with the Internet via the device, and receive phone calls directly into his brain.”

Blueprint for a Battlestar is heavily illustrated, mostly with blueprint-type drawings done by James Carey. They help readers visualize the concepts Pyle describes. A chapter-by-chapter list of sources at the back of the book makes it easy for readers to further explore certain topics.

The one distraction I found in this book was the need for better proofreading. Errors like “atmospher” and “ong-term” would have been caught with a word processor’s spell checker. Catching others, like “jet packs are have been based on,” would have required a human eye. No book is without typos, but there were enough errors in this one that reading it felt a bit like trying to enjoy a tasty meal while occasionally being buzzed by an annoying gnat.

Nevertheless, I recommend this book as an enjoyable source of information on a wide variety of real or imagined technological marvels of the space age. “While our present—in other words, ‘the future’ as envisioned in the past—has not turned out quite as we were told it would, it is still pretty remarkable,” Pyle concludes. “The technologies of the future will astound.”