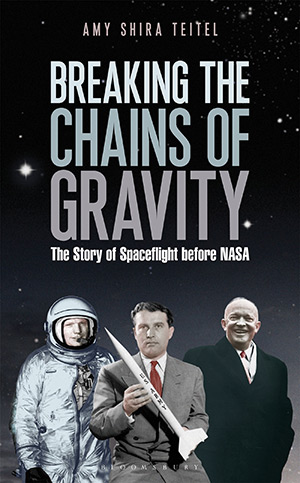 Our spaceflight program arose from many efforts previous to NASA, and this book tells the story of hobby rocket designers of the late 1920s through the first U.S. satellite launch. The author, a Discovery channel host and embedded journalist on the Pluto New Horizons team, examines the pioneers behind the many nascent sciences: rocket missile launches, hypersonic rocket plane flight, and human tolerances and life support. The book also tells a story of U.S. military agencies vying for ultimate control of spaceflight. NSS members will find amazing tales of the risks taken by the early enthusiasts, plus four double-sided pages of photos and three glossaries.

The book starts with a literal bang, describing how members of the VfR, the Society for Space Travel, tested a homemade rocket. They placed a rocket nose-down in a bucket of cooling water while an assistant tossed a flaming rag into the upright nozzle. The techniques used were only slightly more advanced by the time Werner von Braun joined. The junior member ignited a rocket using a lit can of gasoline at the end of a 12-foot pole. Von Braun miraculously survived the inevitable explosion unscathed. And although the VfR’s primitive Opel-Sander Rak.1 rocket racecar only reached a laughable 5 mph, their later Rak.2 attained a top speed of 145 mph on a Berlin speedway.

The next section covers how von Braun and VfR members perfected rocketry with German military funding. A “Glossary of Rockets” at the back of the book provides details of the German A-1 through A-4 (aka the V-2 that terrorized London). It also covers all rockets through the A-9, a future piloted winged variant, and the A-10 capable of reaching America. This section concludes with the captured WWII German rocket scientists’ arrival in New Mexico with 300 train cars of V-2 material. There, they built and flew V-2s under Project Hermes before moving to Huntsville, Alabama to develop new long-range missiles for the U.S. Army.

Readers will learn about the daring test pilots of the X-series of rocket-powered aircraft as they exceeded design specs in their quest to break the sound barrier (Mach 1). Chuck Yeager, who succeeded in the X-1, almost died when his longer X-1A tumbled. Not as lucky was Captain Mel Apt, who crashed his X-2 after reaching Mach 3.2. The attempts at hypersonic stability needed a new craft—the X-15 developed by the Air Force and NASA’s precursor, the National Advisory Committee for Aeronautics (NACA). They utilized an International Harvester Company seat to minimize spinal injuries. And, amazingly, they implemented a small explosive to blow off the large lower stabilizing fin before landing so as not to become “the world’s fastest plow!”

The book then covers the efforts of John Paul Stapp, an Air Force flight surgeon, and his research into human tolerances of extreme environments. Stapp built several rocket sleds such as the Gee-Whizz, followed by the Sonic Wind No. 1, which could speed across the sand faster than a following T-33 jet. After receiving many injuries but surviving 46.2 g’s of deceleration, the Air Force grounded him. But Stapp found a new line of inquiry—surviving in high-altitude balloons while protecting against radiation exposure—and created Project Manhigh. His successes moved forward the concept of using capsules for human spaceflight.

The book’s concluding chapters describe the military interservice rivalries around launching an orbital satellite as part of the International Geophysical Year (IGY) of 1954. A Congressional committee approved the Navy’s Project Vanguard since it had no ties to Germany’s V-2s. And when von Braun’s Redstone/Jupiter C launched with a dummy final stage, a Pentagon official was there to ensure that the Army was not secretly sending a satellite into orbit first! But the Vanguard rocket, underfunded and months after Sputnik, fell back two seconds after launch and exploded with the whole world watching. Finally, von Braun’s Jupiter C proceeded and its Explorer I became America’s first satellite. Quickly thereafter, President Eisenhower pushed for a coordinated and peaceful space program directed by a civilian agency with no military ties. He signed the National Aeronautics and Space Act and, with the NACA at its core, NASA was born with Thomas Keith Glennan at its head.

Although readers may be disappointed that the book ignores Robert Goddard and Konstantin Tsiolkovsky, two fathers of rocketry, the author states this was done to maintain a manageable book length. Even without them, Breaking the Chains of Gravity is a rich story replete with drama, accidents, and colorful individuals who fueled America’s initial efforts to reach beyond our home planet.