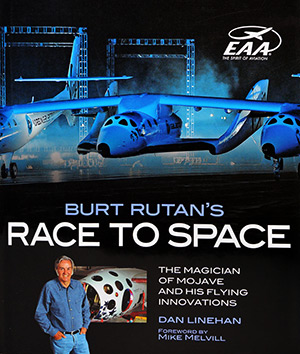 In the space industry, Burt Rutan is most famous for winning the Ansari X Prize in 2004 with his SpaceShipOne and White Knight One designs. Their successors are now being commercialized by Virgin Galactic. Burt Rutan’s Race to Space tracks Rutan’s history from his first wooden aircraft models, through his homebuilt aircraft kits, to his innovative suborbital ships.

Dan Linehan is also the author of SpaceShipOne: An Illustrated History. While that book focused on the vehicle, this book focuses on the man behind it. Linehan aptly portrays the essence of this remarkable engineer and his unique designs, several of which now proudly hang in the National Air and Space Museum.

The book is visually pleasing, informative, and easy to understand. Even the technical aspects of the various innovations are presented in layman’s terms. This 160-page book contains both color and black and white photographs, charts, illustrations, tables, and a listing of the more than 300 designs that originated in the mind of this engineering genius.

The book is divided into five chapters. Chapters one and two are devoted to the development of Rutan’s engineering ideas and his first aircraft. Chapter three details the era of Scaled Composites, Rutan’s second aircraft company. The third chapter informs the reader of Rutan’s efforts to build a spaceworthy craft to win the Ansari X Prize. The final chapter discusses the crafts that have resulted from Rutan’s designs — ones that may eventually allow ordinary people to experience the vast solitude of space.

Burt Rutan has always been an innovator and a visionary. He told Popular Mechanics that “If we make a courageous decision like the goal and program we kicked off for Apollo in 1961, we will see our children or grandchildren in outposts on other planets.” His genius lies in thinking outside the box to overcome challenges that have allowed him to revolutionize air and spacecraft design.

Rutan formed his first corporation, Rutan Aircraft Company (later Rutan Aircraft Factory), in 1969. Through trial, error, and a meticulous emphasis on safety, cost, and practicality, Rutan’s designs became increasingly more sophisticated. His early designs include the VariViggen, VariEze, and Long-EZ. Each of these features Rutan’s innovations such as canards (a small tail attached to the nose instead of the fuselage to avoid stalls), winglets (wing-shaped air foils used to counteract drag), pusher engines, and composite materials to make the craft lighter and cheaper to operate. Rutan sold the plans for these craft to the home-built market.

The home-built market dwindled, eventually leading to the demise of Rutan Aircraft Factory in 1985. Scaled Composites was formed in 1982 to address the need for smaller-scale craft to accommodate affordable jet engines. One of these unique designs included the Pegasus rocket for Orbital Sciences. Working on the wings and fins reignited Rutan’s boyhood passion for space travel, leading to his development of futuristic-looking aircraft and spacecraft like the Roton, which had rocket-powered rotary blades to assist re-entry.

As Rutan “always had the space bug,” he eventually began developing ideas for a one-man capsule. However, he wanted a truly unique system that would be safe, reusable, and cost effective. So SpaceShipOne and its mother ship, White Knight, were born, even before the X Prize was announced in 1996. To win the $10 million competition, the craft had to carry three people or their equivalent weight to an altitude greater than 62 miles (100 km) twice in a two-week period.

Rutan’s mother ship carried SpaceShipOne up to 47,000 feet and released it to fly to the boundary of space on September 29, 2004. The performance was repeated on October 4, capturing the Ansari X Prize and Rutan’s place in the history of aviation.

Taking the design further, Rutan partnered with Richard Branson of the Virgin empire and Microsoft co-founder Paul Allen to develop a craft that would lift paying customers to space as tourists. Although Rutan recently retired, he remains a force in the company as the next generation of innovators builds SpaceShipTwo and WhiteKnightTwo for the emerging space tourism industry. The craft were still in the flight test phase at the writing of Linehan’s book.

Burt Rutan’s Race to Space is a fascinating book that chronicles the increasing sophistication of aircraft designs developed by the “magician of Mojave.” Space enthusiasts in particular will enjoy this 39-year history of innovation that may well lead to their own personal journeys into space.