Book Review: By Any Means Necessary! An Entrepreneur's Journey Into Space 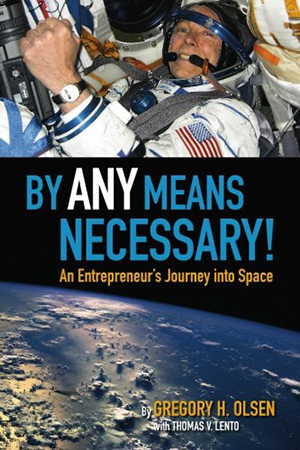 In the 50 years since Yuri Gagarin’s flight, only about 500 people have shared the experience of looking down on our planet from space. A backof-the-envelope calculation puts your odds of being one of those people at one in a few hundred million. That’s the bad news. The good news is that starting about ten years ago, it became possible for at least a few wealthy people to buy their own ticket to space, and so far seven people (about one in a billion) have done so. Unfortunately, the ticket price was around $20 million each — a hefty price tag for all but the very richest people — but like Gagarin and the first government-paid astronauts, the flights of these private citizens are a demonstration of possibility. Instead of crying over the high ticket price, it’s our job to work on lowering the cost, and meanwhile work on building our personal fortunes to the point where the price of the ticket and our ability to pay for that ticket intersect.

Greg Olsen, the third spaceflight participant (with a month’s long training program and the scientific experiments he conducted on his flight, he resists the term ‘tourist’), has written a book that serves as inspiration and a source of practical advice for leading the kind of successful life that eventually puts you in a position to fulfill childhood dreams. His intention is to explain how an aimless middle-class youth on the edge of juvenile delinquency, who flunked high-school trigonometry, could earn bachelor degrees in electrical engineering and physics and a doctorate in materials science, go on to found several successful high-tech companies, and finally become an “angel investor” and mentor for other high-tech startups.

Olsen doesn’t attribute his success to any special talents: “When you understand where I came from and who I was, you have to conclude that anyone has a chance to live their dreams.” His success, he believes, was the result of two character traits: a bulldog tenacity and a refusal to surrender to any obstacle, coupled with an optimism that views temporary setbacks as blessings in disguise. Both those traits are on display in his story. Who can deny the tenacity and optimism of a man who built a company from a handful of employees to the point where he could sell it for $600 million, then turn around and buy the company back for pennies on the dollar after its value plummeted in the bursting of the telecom stock bubble, and build its value all over again? Even more impressive was the path Olsen took after he was turned down by the Russian doctors for spaceflight training due to a hereditary condition that had caused one of his lungs to collapse a few years earlier. Olsen’s response? He got elective surgery to deliberately collapse the other lung in order to clear up the potential problem! Then, when he was accepted for training and was working out in the gym, he tore a muscle in his arm. In order to avoid setback, Olsen accepted the pain, did not report it to the doctors, and continued training while the muscle healed.

This book is less about Olsen’s spaceflight than about how he got to the launch pad. Olsen wants other people to achieve their own dreams, and wrote this book to help show us how. He understands that there is an element of luck, of being in the right place at the right time, which plays a role in success. However, he observes that luck favors hard work and preparation: “Don’t get me wrong. I love being able to afford the things I want — nice cars, vacation getaways, the apartment in New York. Believe me, I wouldn’t want to go back to the lean years. Yet if I woke up one morning and found myself with zero dollars, I’d be annoyed, but I wouldn’t take a gun to my head. Instead I’d say ‘How do I get out of this mess?’ And then I’d get to work.”