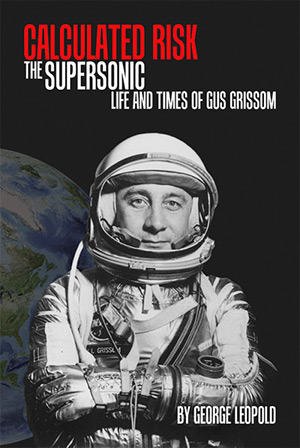 “If that spacecraft had been a horse they would have shot it sometime in 1966, perhaps as early as 1965. Surely no machine suffered so many ailments, not even one that was the first of its kind.” That was the judgement NASA engineer Walt Williams pronounced on Spacecraft 012, the Apollo capsule in which Gus Grissom and two companions were incinerated in a supposedly routine pre-launch simulation in January 1967. The cockpit fire was America’s first space-related loss of life, and the Apollo One crew hadn’t even made it off the launch pad. It  brutally ended Gus Grissom’s ambition to be the first man on the Moon, and the plans of his friend and fellow Mercury astronaut Deke Slayton, who had become NASA’s Director of Flight Crew Operations, to put him there.

Act One: A young man of average talent but above average drive grows up in a small town in Indiana. He graduated high school in 1944 and enlisted in the Army Air Corps just as World War II was winding down. He only saw desk duty for a few months before discharge, but the GI Bill was his ticket away from the blue-collar life waiting back home; he enrolled as an engineering major at Purdue. He and his young wife Betty both held jobs to make ends meet while he earned his degree. Gus worked a number of odd jobs, including flipping burgers and detasseling corn in the fields. His grades were nothing special, but he got the degree and joined the Air Force as a flight cadet. He flew fighters in Korea, then came home and worked his way up the flying chain to test pilot. When NASA sent out its call for the first group of astronauts, he made the cut to that most elite group in U.S. space history.

Act Two: The Mercury Seven were a band of brothers, close friends and fierce competitors for the first flight into space. Alan Shepard won the competition for the first suborbital flight, and Glenn was tapped for the first orbital mission. Grissom was sandwiched between, on the second and last suborbital flight. It was a perfect mission until the recovery helicopters moved in to pluck the capsule out of the water. Then, for reasons still unknown, the explosive bolts on the hatch blew prematurely and water started pouring into the capsule. Grissom scrambled out and spent the next five minutes struggling not to drown while the helicopter tried unsuccessfully to keep the capsule from sinking. In his epic history of the Mercury Seven, The Right Stuff, Tom Wolfe attributes the loss of the spacecraft to Grissom’s accidental activation of the hatch release, and intimates that Grissom panicked. The other Mercury astronauts all had big problems with this part of Wolfe’s book, and in this biography Leopold makes a convincing case that Wolfe got it wrong. Given the position of the hatch release and the amount of force required to trigger it, it’s virtually impossible to have been activated accidentally. The hatch release was a poorly tested system added late in the preflight preparations, and static electricity from the helicopter is a convincing alternative explanation.

Act Three: Grissom got past the controversy surrounding his first flight and threw himself into the follow-on program. Project Gemini taught NASA everything it needed to know to fly humans to the Moon, and no astronaut was more intimately involved in the design of that spacecraft that Grissom. His fellow astronauts nicknamed the Gemini capsule the Gusmobile in recognition of his contributions to it, and it is still considered the most pilot-friendly spacecraft ever to fly. Shepard almost got the first flight in that one as well, but was forced to drop out due to medical issues, so Grissom got to command the first Gemini flight. It lasted only five hours, but in that time he performed the first orbital maneuvers done by any manned spacecraft. That was the high point of Grissom’s life, in 1964.

Act Four: The next two years were one long, hard slog toward the first Apollo mission, ending in death. Act Four was pure Greek tragedy, as hubris met nemesis. By the time Leopold finishes cataloging the flaws of the spacecraft, the reader may wonder why anyone, let alone so experienced a pilot as Grissom, would voluntarily place themselves inside it. NASA was just going too fast to make its “before the decade is out” deadline for the first lunar landing to heed the warning signs: shoddily installed electrical wiring, just begging to short circuit and spark; leaking flammable fluids from the environmental control system; radios so poor they could barely be heard in an adjoining building; lots of other flammable material all over the cockpit; and so many poorly documented changes to the capsule after it had been shipped to the pad. Above all, that unbelievably dangerous high-pressure oxygen system that turned the spacecraft into a bomb waiting to go off—a bomb with no off switch, because the hatch took so long to open even under ideal conditions. Grissom plowed ahead, along with the rest of NASA, trying to make it work right up to the moment of the fatal spark whose source is still unknown.

It took the tragedy of Apollo One to force NASA to the redesign of the Apollo Command Module that they should have done earlier, without which Apollo might never have made it to the Moon. But the fact that their sacrifice was not wasted was no comfort to Grissom’s family.

Grissom, as George Leopold points out in his introduction, is the last of the Mercury Seven to have a book-length biography. Leopold has done his homework, and there is a lot of useful original material here. Enjoyment of the book is severely lessened, however, by Leopold’s writing style. He repeats himself constantly; he can’t seem to remember what he wrote in the last chapter, or the prior page—sometimes in the prior paragraph. Add to that his penchant for overheated, melodramatic phrasing (I lost track of the number of times he told the reader that Grissom “decided to play the hand he was dealt”) and you have a very challenging time focusing on the content. A good editor would have chopped the book by about fifty pages, and left the readers with a much better story. Grissom deserves a really good biography. Until that really good biography comes along, this will have to serve. If you read it, be prepared to read for the content and not for the beautiful prose.