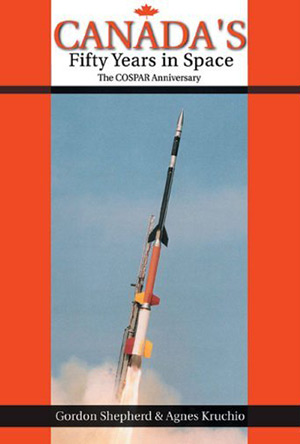 I must admit that the first time I picked up this book I glanced at the cover and put it down to look elsewhere. That action had a lot to do with pride in my own country and a bias toward the red, white, and blue. Heck, we sent twelve Americans to walk on the Moon, how could that maple leaf compete with us?

I am glad I reconsidered, because Canada’s Fifty Years in Space: The COSPAR Anniversary, is as enjoyable to read as it is a thoroughly comprehensive history of Canada’s space efforts. After reading Gordon Shepherd and Agnes Kruchio’s book I gained a much greater understanding of Canada’s extensive space research and the people who made the accomplishments.

The National Research Council (NRC) of Canada was created in 1916 and has guided many scientific efforts and discoveries. In 1932-33 for the International Polar Year 2 (IPY-2), Frank T. Davies (1904-1981) and Balfour W. Currie (1902-1981) led a team to the Arctic for thirteen months of observations and study of the auroras, weather, and geomagnetism. Meanwhile Donald Rose (1901-1988) made ionospheric measurements during a solar eclipse and also became recognized as the cosmic ray expert in Canada. Because of their early expertise in radar technology, Canada was tasked to mass produce radar equipment small enough to be carried on aircraft for the war effort. Later, with difficulties in polar radio communications in the north Atlantic, the British Admiralty turned to Canada and their experts in auroral and ionospheric disturbances for help. Frank Davies and others at the NRC were able to predict the most reliable radio frequencies to use during these atmospheric events. The authors guide the reader through the early days of Canadian space research and in depth technical descriptions of auroral ionospheric science. They have also included many direct accounts by the people involved in the discoveries, which make the story even more enveloping.

The launch of Sputnik in 1957 led to greater space research and establishment of the Committee on Space Research (COSPAR) at a meeting in Washington D.C. October 2-4, 1958, only one day after the formation of NASA. This international group was designed to advance the work in space and upper atmospheric research and led to better understanding of the ionosphere, cosmic rays, and preliminary work to the discovery of the Van Allen radiation belts.

Shepherd and Kruchio describe the International Geophysical Year (IGY) July 1, 1957 to December 31, 1958, during which the U.S. set up Canada’s first rocket launch range at Fort Churchill, Manitoba. Many successful launches and measurements were made from Churchill during the IGY, providing valuable Earth and atmospheric science for policy makers and environmental planners. In fact, measurements of the stratosphere identified the “ozone hole” and led to the regulation of chlorofluorocarbon’s (CFC’s). Further, Canadian researchers detected lithium in the upper atmosphere, originating from nuclear bomb tests in the U. S. and USSR, showing the worldwide environmental impacts and helping to end the testing.

From their first satellite Alouette I launched in 1962, to its Black Brant rockets, to the geostationary Hermes satellite providing communication for tele-health, education, and science, Canada’s space endeavors have continually produced valuable scientific data on the atmosphere and near Earth space.

The authors artfully describe Canada’s first major contributions to human space flight, from the development of the remote manipulator system, commonly known as Canadarm, first flown in November 1981, to Canada’s first astronaut Marc Garneau lifting off  on October 5, 1984 aboard space shuttle Challenger for a nine day Earth observation mission. Not to be left out of the International Space Station (ISS), Canadarm 2 was installed in April 2001 with the help of Chris Hadfield, Canada’s first spacewalker. Commitment to the ISS led to the creation of the Canadian Space Agency (CSA) on March 1, 1989. This helped advance Canada’s space technology including the microgravity isolation mount (MIM) to reduce vibrations from equipment on the ISS to experiment packages.

Canada’s most recent space activities include the installation of DEXTRE, the dexterous manipulator, on the ISS on March 11, 2008. Canada also participated in the U.S. Gravity Probe B mission launched on April 20, 2004, to test Einstein’s general theory of relativity, completing measurements in 2008. When the U.S. Phoenix vehicle landed on Mars on May 25, 2008 in the north polar region it carried the CSA meteorological station (MET) and a lidar (laser radar) which can probe the Martian atmosphere up to about twenty kilometers altitude. Future missions for Canada include instruments provided for the U. S. James Webb Space Telescope (JWST) which will view the universe in the infrared wavelengths and is scheduled for launch in 2013.

Canada’s Fifty Years in Space thoroughly describes Canada’s history of space research. The authors keep the story interesting and highly readable even through the in depth tutorials of auroral and atmospheric physics. There is much to be gained reading this book, including an understanding of the cooperative efforts in space research between the U. S. and Canada. I thought I had a pretty good handle on space history before reading this text, but found that I was missing out on major space accomplishments of an entire nation. Don’t let your pride in the stars and stripes keep you from picking it up.