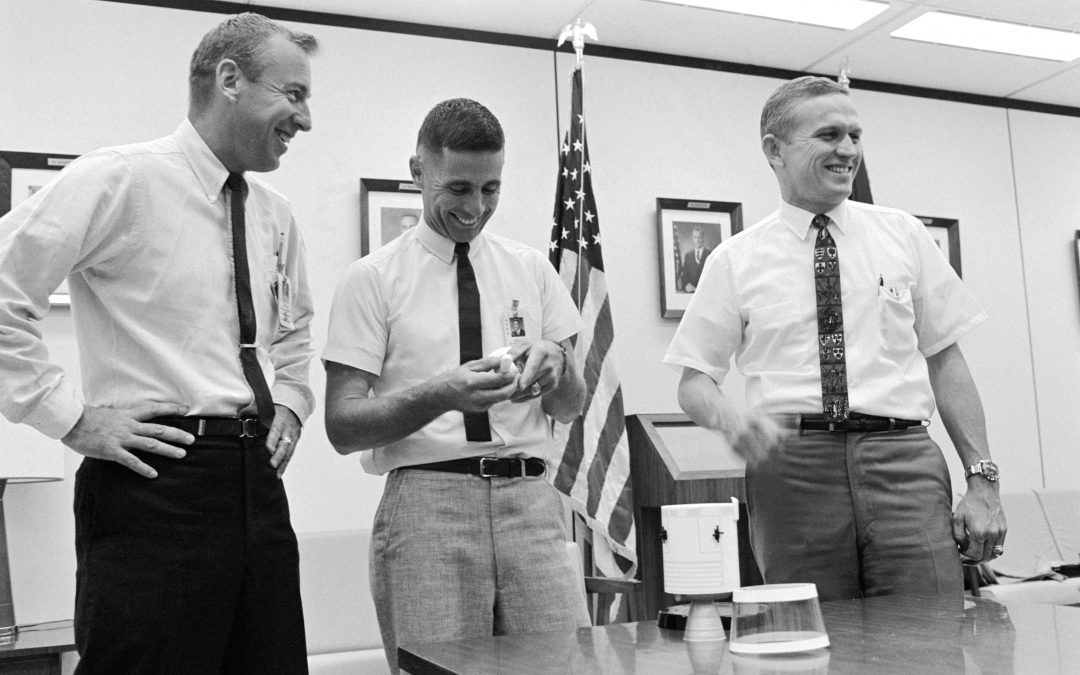 This anniversary year has turned up a wealth of Apollo 11-related content, some wholly original, some not. It would be easy for writers and filmmakers to simply rehash the general story, just like it has been told scores of times previously. However, the book Chasing The Moon by Robert Stone and Alan Andres (a companion to the PBS series of the same name, which premieres on Monday, July 8th) tells the story of Apollo against a vast backdrop of originators, politicians, chroniclers, and more obscure figures who shaped the era and the lead-up to the era through their actions and words, a unique approach. Note: some book spoilers included.

The book’s first chapter does discuss rocket pioneers including Goddard and Von Braun, but also introduces the reader to Arthur C. Clarke, the visionary spaceflight writer and thinker. Clarke’s career winds through the book just as a neon-colored thread winds through a tapestry, providing added vividness to the narrative, and illuminating the nascent early days of space travel (indeed, Clarke’s ideas for communication satellites would go from science fiction to science reality during the course of the book).

In addition, Stone and Andres also profile the careers and travails of pioneering figures such as Ed Dwight (an African-American Air Force pilot who was touted to become the first black astronaut) and Frances “Poppy” Northcutt, a TRW mathematician who would become one of the first women to work in NASA’s Mission Control. The reader realizes that while the politics of the 1960s made it possible for humans to first tread footsteps upon the Moon, many of the same political forces couldn’t eliminate the issues of racism, war, lack of equal pay, and poverty that plagued the decade. However, for one brief, shining moment, the nation – indeed, the world – was united by the ghostly visions of Armstrong and Aldrin making their first steps upon another world. 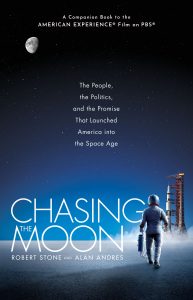 Ironically, Neil Armstrong does not emerge as the “astronaut hero” in the book, even though he would become the First Man. (In all fairness, Armstrong’s life and career have been discussed at length in many films this year, including the biopic First Man, Apollo 11, and the upcoming documentary, Armstrong.) While Armstrong’s career is profiled with much respect, fellow New Nine astronaut Frank Borman emerges as the hero who arguably may have saved the Apollo program. His work during the command module redesign and accident investigation following the Apollo 1 fire receives rightful attention; for those who may be previously unfamiliar with the Apollo saga, Borman certainly is a significant figure for these reasons, and deserves tribute.

Chasing The Moon doesn’t shy away from more controversial topics surrounding some of its figures, which is, too, refreshing. The “yin and yang” of Von Braun’s life and career is explored; in addition, the Kennedy family’s wavering stance concerning spaceflight is also addressed. While Stone and Andres shy away from painting anyone as purely a saint or purely a villain, they do an admirable job discussing the problematic nature of some of the era’s well-known figures, while staying objective.

Apollo 11 is historically a well-documented spaceflight, and, again, has been the subject of scores of books and films throughout the last 50 years – some excellent, some re-treads to cash in on anniversaries. Chasing The Moon’s novel approach to its topic – telling the story of Apollo against a rich backdrop of diverse characters – helps it stand out head and shoulders above the rest.

Featured Photo Credit: “The prime crew of the Apollo 8 mission is photographed in Building 4, at the Manned Spacecraft Center (MSC), where they are participating in classroom work in burn test review and procedures review. Left to right, are astronauts James A. Lovell Jr., William A. Anders, and Frank Borman.” NASA photo, dated Oct. 18, 1968. Apollo 8’s mission is chronicled in Chasing The Moon.