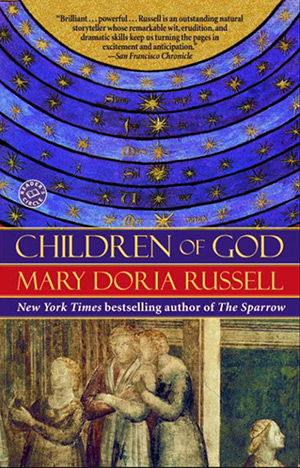 Paleoanthropologist Mary Doria Russell has written seriously about religion in two remarkable books entitled The Sparrow and Children of God, which describe the adventures of Jesuit priest Emilio Sandoz on a voyage to Alpha Centauri (see review of The Sparrow for more background information). Children of God is a direct sequel to The Sparrow, beginning a week after the first story ends. Indeed, Russell planned for this sequel all along (as noted in an interview at the end of the book).

This second book delves more deeply into the characters introduced in The Sparrow (the ones who survived, anyway) and especially the relationships between humans and the two sentient species on Rakhat. Children of God helps clarify many of the background events that resulted in the loss of The Sparrow’s crew and delves into the longer-term consequences of human actions on Rakhat.

The Jesuit Father General Giuliani announces plans to return to Rakhat to learn what happened. More to the point, Giuliani and the Pope believe that Sandoz must return to Rakhat for the sake of his soul. Being a Protestant, I must take Russell’s treatment of Catholic doctrine as legitimate, but their reasons for sending Sandoz back—at least from a religious angle—made sense to me. Some of the other reasons are less enlightened and cause Sandoz trouble later on.

Sandoz, having traveled back and forth between Earth and Rakhat at near-relativistic speeds, is able to observe and interact with many of the players and their offspring across decades. In some places, Russell seems almost cruel in her treatment of the Sandoz character, but her intent is to answer “why bad things happen to good people,” which is a question at least as old as the Book of Job, which naturally is quoted by several characters.

There is more time on Earth in this book than in the first one. Small touches ring true, like having a Pope born in Africa or artificial intelligence programs being developed to replace human analysts. If I had one critique of the future Russell creates, it is the contrast between the depleted and overpopulated Earth she mentions in passing while the bulk of the action takes place in safe, suburban enclaves somehow insulated from this worldwide poverty. Where are those 14 billion people living? Would a world (or Jesuit order) that was poor really have the money to build asteroid-mining spacecraft, much less an expedition to Alpha Centauri? If anything, space advocates have argued that we need to get into space now to prevent the future Russell describes.

I will conclude this review as I did the previous one:

On the cautionary side, The Sparrow and Children of God are not children’s books. There is personal violence, war, sexual violence, and quite a lot of profanity (which is especially off-putting given how much of it is coming from priests).

I recommend both books. For space advocates, the books offer glimpses into interstellar travel, “first contact” protocols, and moral issues arising from the human exploration of space. I’d say the books could also be enjoyed by people interested in character studies or religious fiction. The lessons are hard, and one might or might not agree with all of Russell’s theological points, but I was moved by her story and the message she tells while writing it.