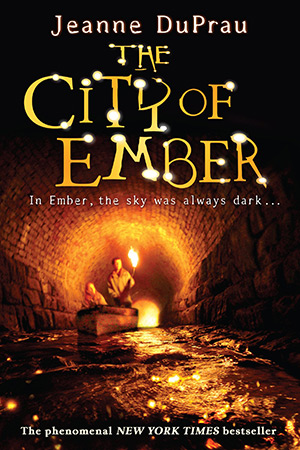 The City of Ember by Jeanne DuPrau is an engaging mystery that could easily be set inside an abandoned underground space settlement. Twelve-year-old Lina does not know where her city is, or how it came to exist. She knows only that it was built 200-some years ago and stocked with everything the residents needed to live comfortably. She eats canned food supplemented with some fresh items grown in a community greenhouse. The city is surrounded by total blackness. Artificial lights provide their sole illumination.

At age 12, the children of Ember graduate from school and take jobs maintaining their community. Lina longs to be a messenger, but as the story begins, she draws pipeworks instead. A boy named Doon, who drew messenger, trades with her. Doon explains that he wants to be underground because that is where the generator is—and he hopes to find and fix the problem that is causing ever-more-frequent blackouts. He accuses the mayor of covering up the fact that the city is in danger of collapse and is running out of critical supplies such as light bulbs.

We soon learn that Lina’s parents died of some sickness, and she and her baby sister live with their grandmother. The grandmother is the daughter of a former mayor—who, the reader was told in the prologue, was supposed to pass along a special box that would open after 200 years and tell the inhabitants of Ember what to do when their supplies ran out. The former mayor died without passing on the box to his successor. The senile grandmother uncovers the box in the closet and Lina’s baby sister chews the fragile document inside. Lina pastes the pieces together and, with the help of Doon, and thwarted by the corrupt mayor and his police, seeks to solve the mystery of the “Instructions for Egress” and save the people of Ember.

Many aspects of the story resonate with problems that may be faced by a space settlement that loses its connection to the outside universe. People in an artificial environment with minimal knowledge of the science and technology that sustains them are probably doomed, at least in the long-term. The people of Ember do not even have portable lights to use to explore the darkness beyond their city. At first I found this unbelievable, but then I considered that they would lack the raw materials with which to experiment. After 200 years, though, I think someone would have found a way to make oil from plants in the greenhouse and use it in a lamp, or develop a battery from spare parts out of some machine. Then again, if everything is provided to you, there may not be much incentive to invent or improve things. Without a knowledgeable teacher, it may not even be possible. If your local power plant was knocked out, could you fix it, even if someone gave you the technical drawings? I doubt you could do it in complete darkness!

There are good lessons here for space settlement advocates to keep in mind. One is that knowledge of systems and skills that support human life, including manufacturing items from raw materials available and even basic things such as how to make a flashlight, are essential for survival. And that knowledge must be widespread in the community and well-documented so that it can not die with a specialist, be hidden by a selfish or insane person, or lost when communications with the outside world are purposefully disconnected (this is what has happened to these people, though we don’t know why).

I found this book intriguing and fascinating, and the main characters likeable and believable. The adults were a bit stereotypical, but they are also not essential to the story. The book comes to a logical conclusion, but many questions remain unanswered. The premise for the story, that the inhabitants of the City of Ember were locked away in this city for 200 years without any knowledge of where they are or why, is not revealed. This is the first book of a series, however, so perhaps the answer lies in one of the later books.

School Library Journal reports that there is an excellent audio version of this book that teens and parents may want to listen to and discuss during road trips. What are some of the technical things we take for granted in our world? What essential knowledge do we need to fix them? Aren’t all those the same things we need to know to run a space settlement?

The City of Ember is an engaging tale of mystery and exploration that should entertain and inspire young people everywhere, especially those who dream of being space pioneers.