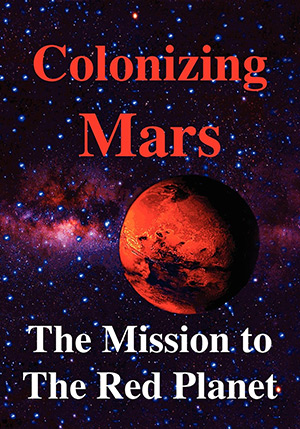 Full Disclosure: The author of this review was a contributor and editor for an article in this anthology.

After the Curiosity rover’s successful landing, it seems a good time to talk about human missions to the planet Mars. Colonizing Mars, an anthology released by the Journal of Cosmology, offers a series of 19 thought-provoking essays on the reasons for sending humans to the Red Planet and what challenges will impact the effort.

Perhaps the most important and useful aspect of these essays is that many of the authors disagree with each other about why or how to proceed. This is important because it gets dialogue going about the whole enterprise. On the one hand, authors like Robert Zubrin have no doubt about the historical importance of sending people to expand civilization to Mars. On the other hand, a quartet of authors from SETI, NASA, and an environmental policy think tank suggest that if we’re not going to settle Mars permanently, we might as well send robots to avoid destroying evidence of life on Mars through our own clumsiness. Is our purpose for going to Mars to have people settle there or merely to conduct science? That is a debate worth having.

Other questions also require discussion. How do we get there? Who pays? Zubrin calls for a “Mars Direct” architecture in eight years, using current technologies. Apollo 17 astronaut Harrison Schmitt suggests we go to the Moon first to learn how to live on another world and extract local resources. Suggested funding sources range from NASA to private donors to an internationally chartered business conglomerate. Estimates for a human Mars expedition run from $15 billion to $150 billion, which is another sign that we need to do some more homework.

In addition to the more philosophical or political questions, more than half the essays address the effects of a Mars mission on human health, covering everything from bone loss to sexual sterilization and psychological problems. Crew stress is a particular concern. Our nation’s astronauts really do embody “the Right Stuff,” as Tom Wolfe called it: high achievers, intellectual strivers, rational risk takers, physical athletes, etc. Yet the book mentions real and simulated situations where these better-than-average humans had conflicts, breakdowns, or difficulties adjusting to long space missions. Can a group of highly trained alpha males and females get along well enough in close quarters to accomplish a mission in two and a half years without serious friction? One example of psychological stress and sexual competition is the sad story of the female astronaut who attacked her astronaut lover’s new girlfriend in a Florida parking lot. That is just one type of situation that would be difficult to deal with in a small spacecraft.

Several essays suggest where human missions should land, how they should live, and what they should do once they get there. Proposed living arrangements include the “tuna can” approach as well as living in caves or excavating and building brick vaults and domes out of local materials. Site selection also becomes important to get the most bang for the buck science-wise without causing explorers undue hardship or damage to their equipment. Is it safe? Is it interesting? Is it close to potentially useful resources? Is it aesthetically pleasing? These are just some of the challenges facing future mission planners.

A couple authors address the problem of “forward contamination” (allowing Earth life to spread to Mars, possibly killing or displacing indigenous Martian life) and “backward contamination,” which is a fear of Mars-based life causing havoc back on Earth (à la Michael Crichton’s The Andromeda Strain). How serious is the problem? What precautions, if any, do we take to avoid contamination? If we find life, do we just decide not to worry about it because life on Mars is only at the level of bacteria? Again, it’s a debate worth having before we spend billions of dollars.

I found the last essay in the book intriguing because it’s about that ever-elusive challenge, engaging the public. “Marketing Mars” provides an almost purely capitalistic approach to raising money for a mission through sponsorships, reality TV shows, international competitions for astronaut crew spots, merchandizing, and selling mineral and property rights. This premise begs the question of where one comes up with the money for all that in the first place, but I admire the author’s enthusiasm.

While this book is bound to be devoured by Mars enthusiasts, the opinions in Colonizing Mars offer a useful collection of the political, scientific, economic, social, medical, and ethical aspects of exploring another world. Anyone who’s in favor of space exploration may benefit from a three- or four-dimensional view of the issues involved in supporting the cause to answer the toughest question of all: “Why should we go?!”